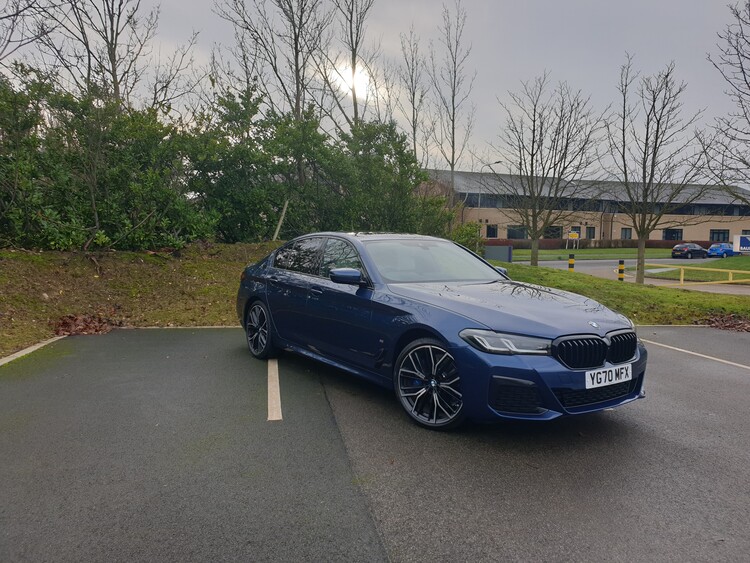 It’s another efficiency test this month as a bank holiday weekend trip offered the first opportunity to measure the fuel consumption of the BMW 530e on an extended journey.

Previously, we’ve commented on the need for a journey of 10-plus miles to get the most out of the electric range; short two-to-three-mile trips rapidly drain the battery. But what about a 306-mile round trip to Gloucestershire with a full charge at the start of the journey, but no top-ups afterwards?

It sounds a recipe for disaster given all the claims about PHEVs being extremely inefficient when running solely on petrol. However, the 5 Series was a pleasant surprise.

With sat-nav engaged and Adaptive drive mode selected, which allows the car to automatically adjust accelerator sensitivity, gear shifts, steering sharpness and damper firmness based on driving and journey conditions, and the usual rules around keeping to speed limits, but not trying too hard to be ultra-efficient, the results were impressive.

Refilling at the end of the round trip produced figures of 54mpg, or with the 34 miles of electric range subtracted, 49mpg. From a 2.0-litre petrol, weighing in at 2,505kg, this is an incredible performance, putting the equivalent 2.0i Mild Hybrid 5 Series – a relative lightweight at 2,285kg – in the shade at 42.2mpg.

Used in the Adaptive/Hybrid mode, the car feeds in the electricity at optimum times – at my destination, 153 miles in, it still had six miles of electric range left on the trip computer.

I’ve been critical previously about plug-in hybrids; why spend almost four hours charging to get 30-plus miles of range when you can spend a couple more hours getting close to 200 miles on a full-electric.

However, the 530e is more flexible than originally thought, offering efficiency on journeys from 10 miles to 300, although peaking at around 150. I only wish I’d checked the fuel consumption at that point as the majority of the return journey was on petrol only.

Its only shortcoming is on the short trips.

Do driving modes make a difference?

A series of 12-mile commutes in recent weeks for Fleet News Awards judging presented the ideal opportunity to test both modes.

First electric. The journey to work consists of A and B roads, with speeds ranging from 30mph-to-70mph. Weather conditions were fine with no use of the air-con or seat and steering wheel heaters. With speed having a significant impact on range, I’d expected the dual carriageway portion to sap the charge, but the on-board computer suggested that, once up to speed, the drain on the battery was low.

The 12-mile journey used exactly 12 miles of range – although it was notable (mentioned in previous tests) that during the first mile or so, the range slumped by three miles. PHEVs need journeys of 10-plus miles to show their true abilities. 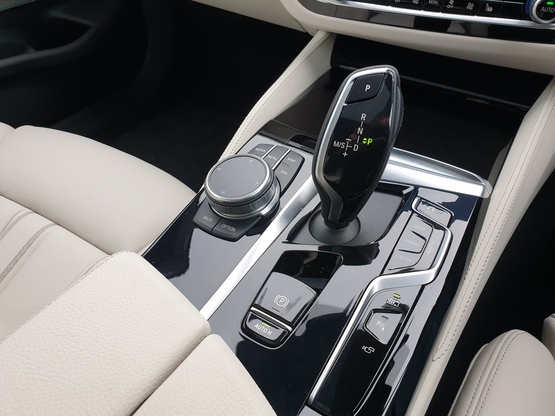 Now, what about hybrid? This was a surprise. In this mode, the same commute used just seven miles of electric charge, yet the petrol range only dipped by one or two miles resulting in combined use of just eight-to-nine miles for a 12-mile journey.

Managed by the on-board computer, Hybrid selects the best combination of electric and petrol depending on conditions and driving behaviour to deliver optimal performance, fuel consumption and comfort. My experiences suggest it works.

The 530e also has a two other modes: Sport, which tightens the steering, makes the throttle more responsible and ratchets up the gear shift, and Adaptive, which automatically adapts to the driving style and route (via sat-nav) to provide a more sporty or comfort set up. Both have a noticeable impact n the car’s performance.

Something that works less well and is starting to become a real annoyance is the infotainment gesture control. It’s frequently triggered accidentally by using the indicator or even just turning the steering wheel, going on mute or changing the radio station.

Fortunately, a quick Google search reveals it can be deactivated. For me, it remains an unnecessary piece of technology.

A growing number of companies and drivers are leapfrogging the plug-in hybrid (PHEV) stepping-stone and going straight from diesel to pure battery electric (BEV).

Having driven a couple of BEVs recently, I can see why. Both offered range in excess of 200 miles and both could be charged to full overnight (roughly 11 hours) or to 80% in around seven hours, giving 160 real-world miles. In contrast, PHEVs can take up to four hours to fully charge, with a range of around 34 miles; our
BMW 530e, for example, takes 3.75 hours on my home Pod Point.

It’s not linear either: plugging the 530e into the the local Tesco’s free Pod Point during a 50-minute shop returned just four miles EV range (I’d hoped for closer to 10).

The 530e offers maximum return when pushing the electric range to its limits. Commutes exceeding 10 miles return high levels of efficiency – my own (albeit infrequent) journey of 17 miles uses just 14 miles of charge.

Pottering around town saps the charge, though, with three miles of range commonly disappearing within just one mile of driving. So how does the 530e match up against the traditional fleet 5 Series favourite, the diesel 520d, on costs?

SMR is identical; the PHEV loses out on the depreciation (although fleets are reporting stronger than forecast residuals). It wins on fuel cost – but only just. KeeResources shows 11.92ppm versus 13.31.

Right now, my journeys are electric making my ppm roughly 6ppm, half the official figure. Maintain that performance over the operating cycle and the cost would fall by £4,700.

And that’s before the employee’s BIK savings are taking into consideration (£1,900 per year for a 20% taxpayer), some of which could be used to sway the financial calculations in the company’s favour.

Bundled together for the right profile driver, the 530e PHEV makes financial sense from both an employee and employer perspective.

While driving opportunities have remained limited, regular trips for groceries and occasional meanders around the local countryside for a change of scene has been enough to begin forming a picture of the BMW 530e.

The PHEV version of our current Fleet News executive car of the year shares many of the attributes of the diesel we tested three years ago (since refreshed with sharper looks and new tech). It’s nimble, despite carrying a little extra weight due to the 12kWh battery, handling is incisive, it offers bags of grip and the
ride is smoother than you might expect for a sporty BMW. It also comes loaded with safety technology and a high-quality interior.

The big difference (aside from benefit-in-kind thanks to the low CO2 rating) is the performance: 0.62mph in just 5.9 seconds from a 2.0-litre petrol engine, substantially faster than the 520i and 520d.

But, let’s be honest, we’ve spent far less time zipping along the winding roads of Lincolnshire as we have navigating the low speed B-roads leading from chez Briers to chez Tesco. 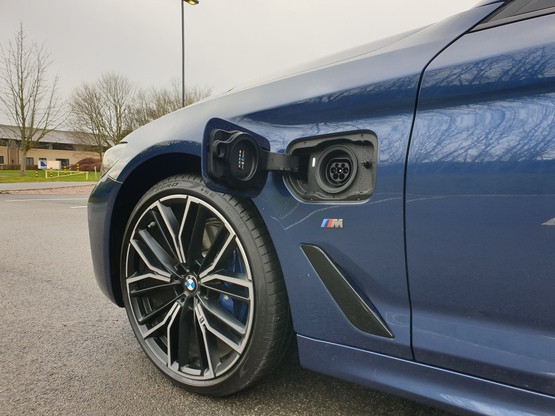 Those regular lower mileage journeys suit the 530e with its 34 miles of range, enabling all my journeys to be carried out on electric without requiring daily charging (in truth, much the same as driving a full electric vehicle!).

I have had the chance to test the empty-full time, however. On my 7kW Pod Point home charger, the BMW took 3.75 hours to fully charge (note it charges at 3.7kW). Interestingly, the read-out shows range of 21 miles, not the promised 37 WLTP figure.

Despite some speculation about PHEVs only charging to 80% capacity to protect battery life, BMW says the range displayed is based on electrical consumption (both driving and ancillaries), exterior temperature and high voltage battery temperature.

Plug-in hybrid (PHEV) is widely acknowledged as a stepping-stone to full electric and its appeal has rocketed due to the dramatic reductions in mileages seen during the Covid pandemic.

With home working, the majority of journeys can be undertaken on electric with the comfort blanket of a petrol (or diesel) engine should drivers need to travel further. No surprise, then, that registrations of PHEVs soared by 91% last year to take 4% of the market (2019: 1.5%).

Our new BMW 530e fits perfectly into this setting, offering up to 34 miles of electric-only range, which can be charged in 3.5 hours at 3.7kW (hopefully quicker using the supplied 7.4kW cable with my Pod Point home charger).

There are wins for the company, too, with a £205 saving on first year VED, and £1,054 on Class 1A national insurance. We’ll delve into the running cost details in a subsequent review. 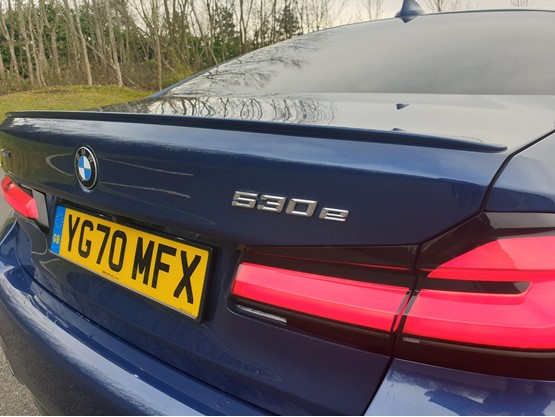 Official emissions for the 530e xDrive M Sport, according the Fleet News Car Tax Calculator, range from 38-48g/km depending on spec; our car hits the upper limit of 48g/km. However, it makes no different to the BIK as the threshold is 50g/km.

So, what is adding the addition weight, or affecting efficiency? We could point the finger at the Sport Pro Pack with its 20-inch run-flat wheels (standard spec is 19-inch, but you can option down to 18-inch), although the official word from BMW is that larger wheels don’t always mean more weight or less efficiency, particularly with the work it is doing on aerodynamics.

A word of advice: you can check the exact CO2 figures for your desired spec via the configurator on BMW’s website.