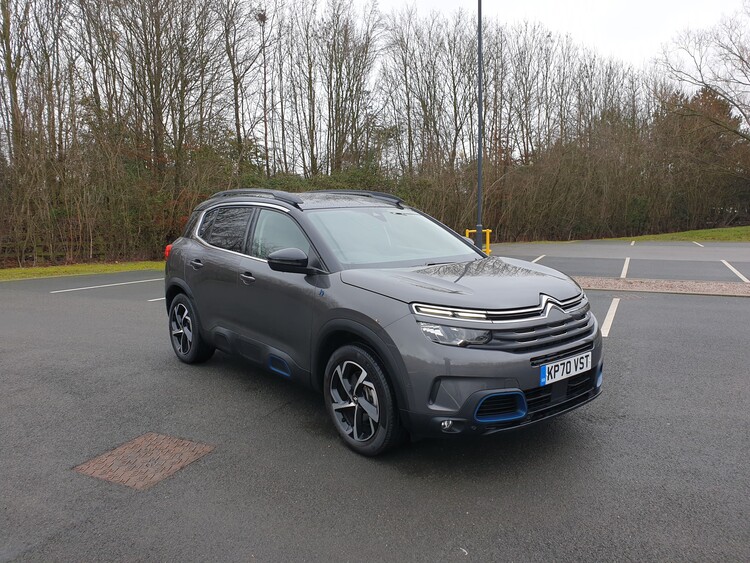 Citroen’s first plug-in hybrid (PHEV) model – the C5 Aircross – has impressed during its tenure on the Fleet News long-term test fleet. Its quirky good looks reflect the French manufacturer’s styling, while it also delivers the comfortable ride synonymous with the brand.

These characteristics, coupled with the ability to drive the C5 Aircross plug-in hybrid in pure electric mode, make for relaxed driving. The 13.2kWh battery has a claimed electric range of 34 miles, which in real-world conditions has been achievable. Charging takes two hours on a 7kW wallbox or seven on a three-pin plug. Citroen recommends the use of a wallbox or public charging point, so only supplies a Type 2 charging cable with the car.

A blue light on the front of the rearview mirror is illuminated when the vehicle is operating in 100% electric, zero-tailpipe emission mode. Whether passers by will know what this means, remains to be seen.

Official fuel economy is from 157.2-222.3mpg under WLTP testing but, as with any plug-in hybrid, drive it with a flat battery and you achieve closer to 30mpg. Using a combination of electric and petrol on longer trips will see the C5 Aircross Hybrid happily return more than 50mpg. The end results are close to what a diesel C5 Aircross can achieve, but in the Hybrid you get almost 100PS extra power and lower tax bills.

While the C5 Aircross is designed to look like it can head off-road, it is front-wheel rather than four-wheel drive. Sometimes the 225PS combined power output can overwhelm the front tyres when you try to pull away quickly.

The infotainment system is easy to navigate, providing sat-nav, DAB and Bluetooth, while the lane departure system is easily switched off, which is a bonus when, like me, you find it a tad annoying.

Unfortunately, another annoying feature is a warning noise produced as you approach speed cameras, which I could not work out how to disable.

These are not deal-breaking downsides, however. The C5 Aircross plug-in hybrid is great to drive in pure electric mode and delivers in hybrid or sport mode, making it the perfect match for a company car driver who only makes the occasional long journey.

It's all about comfort

Citroen’s experience gained from its involvement in the World Rally Championship (WRC) delivers a high degree of ride comfort in the new C5 Aircross.

The suspension system, consisting of a series of hydraulic cushions, takes potholes and other uneven road surfaces in its stride. This is further enhanced by seating which gives the right amount of lumber support on longer journeys.

As well as well as being a comfortable car, the C5 Aircross is also quiet. In 100% electric mode, it offers a refined driving experience. However, even when the petrol engine kicks-in, a degree of tranquility remains thanks to acoustic laminated front windows on the hybrid, available as standard on all trim levels. 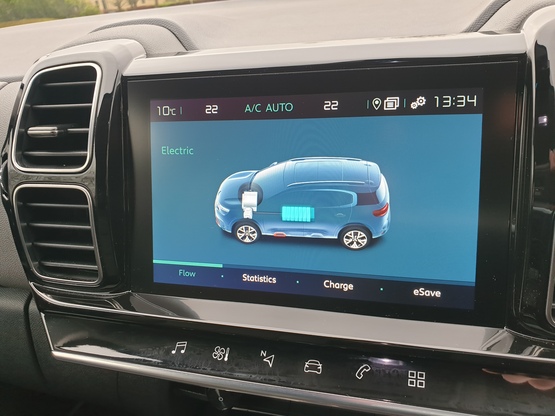 The C5 Aircross hybrid offers three drive modes: Electric, Hybrid or Sport, with the switch located between the driver and the gear selector. Starting a journey in town in hybrid mode and battery power is likely to be drained before the engine starts, while at higher speeds on an A-road, both electric motor and petrol engine combine well.

Meanwhile, a regenerative brake feature amplifies deceleration of the vehicle without pressing the brake pedal, to increase range in 100% electric mode. This system allows recovery of the energy available during braking and deceleration phases, unlike ICE versions

Think of Citroen and you think of striking good looks and the promise of a comfortable driving experience. First impressions suggest the marque has achieved both with the C5 Aircross SUV plug-in hybrid.

There are design flashes inside and out which reflect an expected quirkiness from Citroen. The car’s front end is dominated by its grill encompassing narrow LED lights.

Compared to it's stablemates, the Peugeot 3008 and Vauxhall Grandland X, which all use the same platform, the C5 Aircross is the softest-riding and most comfort focused of the three. 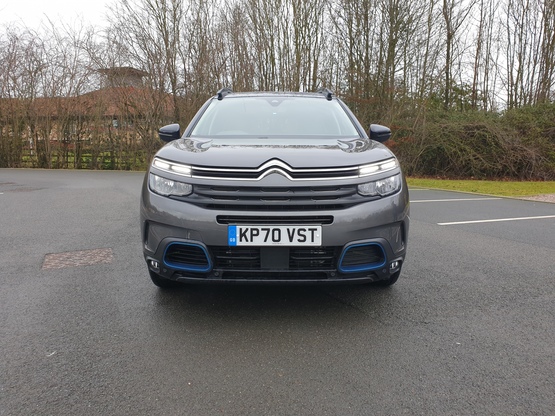 On the road, Citroen’s Advance Comfort Suspension – with additional hydraulic cushions at the end of the shock absorbers – gives a smooth, floaty ride at high speed, but rolls and pitches through bends. It also has trouble countering bumps at lower speeds around town. This feature is unique to the C5 Aircross and makes a noticeable difference to the ride quality on rougher roads.

The steering and handling are precise, making for swift, but somewhat un-engaging, progress. The lane-departure system can test your patience on country lanes, but makes sense on the motorway.

The eight-speed automatic gear box works well most of the time, shifting quickly and effortlessly between gears. However, plant your right foot for a second and it has a tendency to get caught out.

The new C5 Aircross SUV is Citroën’s first plug-in hybrid (PHEV) model, marking the start of a move to have an electric option for every car and van in its range by 2025.

Following our test of the BlueHDI diesel version last year, we are now putting the Hybrid version though its paces to see how it will suit fleets and company car drivers.

The car is powered by a 1.6-litre four-cylinder petrol engine producing 180PS, a 13.2kWh battery pack and an electric motor mounted to the gearbox. This powertrain produces a total power output of 225PS and 360Nm, which goes to the front wheels via an eight-speed automatic gearbox. Most of that torque is available from standstill – which is a powerful reason why this front-drive-only model’s generous retinue of driver aids (lane-departure warning, blind-spot monitoring, parking sensors, colour reversing camera) needs to be topped by a very effective traction control.

Citroen says this set-up is capable of 168mpg, although drivers are likely to see a lower figure in real-world driving. We'll report back on our experience once we've covered a few more miles in it.

CO2 emissions are rated at 32-33g/km dependent on specification, with a claimed pure-electric range of 34 miles - placing the car in the 10% benefit-in-kind tax bracket (11% after April 2021).

The battery can be fully charged using a 7kW wallbox in two hours, with a charger plugged into a domestic socket taking six. It can also be topped up on the move via regenerative braking or using the car's engine.

Inside, Citroen’s ‘Advanced Comfort’ seats are standard, along with the fully adjustable sliding rear seating bench found in the conventionally-powered C5 Aircross, which allows for individual seats to be folded.