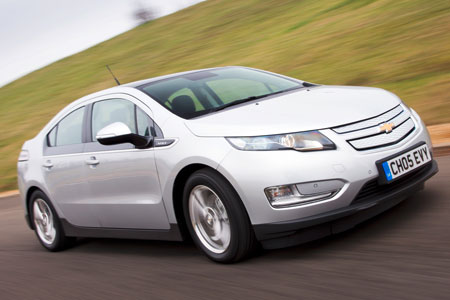 The Chevrolet Volt – voted European Car of the Year 2012 together with its twin, the Vauxhall Ampera – opens a new chapter in the 100-year history of the American brand.

Not only is it Chevrolet’s first mass-produced hybrid car, but also it introduces its extended-range electric technology for the first time in the UK.

Chevrolet might claim the Volt isn’t a hybrid in a bid to distinguish it from cars such as the Toyota Prius, but we’ve had a look in the dictionary and a car that uses two power sources – in this case plug-in electric charge and petrol engine charge – definitely fits the bill.

The Volt can run 50 miles on its plug-in charge alone. Thereafter the battery, which continues to propel the car, is charged from the 1.4-litre petrol which, of course, can be refuelled at any filling station, removing range anxiety that is often an obstacle to choosing a pure electric vehicle.

Its electric drive unit provides 273lb-ft of torque, an acceleration time of 0-62mph in nine seconds, and a top speed of 99mph for impressive straight-line performance.

Its economy credentials are even more impressive on paper with the official combined fuel figure a staggering 235mpg with CO2 emissions of only 27g/km. As the Volt’s plug-in charge gives the car about half the range of a pure EV, it can be fully charged in around four hours.

The interior feels more like a cockpit with touch sensitive dashboard controls and two large screens that replace conventional instruments usually found in the dashboard.

Electric power steering is light and responsive and the brakes feel strong, assisted in part from the ‘braking’ effect of energy recuperation. The Volt offers a very smooth driving experience in comfortable surroundings.

Easily the highlight is the sweeping white touch screen centre console which adds an upmarket and hi-tech flavour to the interior.

The Volt is a good-looking car but is unlikely to be as popular as the Ampera given Vauxhall’s bigger fleet muscle and greater awareness and network coverage (the Volt is being sold at just two Chevrolet dealers).

The car will cost £29,940 after the Government’s £5,000 plug-in subsidy. Although expensive as an outright cost, the savings that can be made in fuel, tax and congestion charge make the Volt a competitive proposition.

The P11D value is £34,940, but with a 5% BIK tax rate until April 2015, a driver would pay only a little more than for Chevy’s most fuel-efficient model, the Aveo diesel supermini.