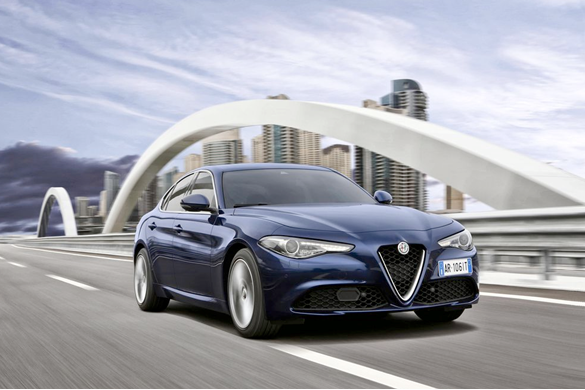 It’s probably true to say that Alfa Romeo has never launched a car as important to the company as the new Giulia. As well as giving it a much needed volume boost in Europe, the car will reintroduce Alfa Romeo to North America, after a long absence.

It means the Giulia needs to be competent enough to take sales from Jaguar, Audi, Mercedes-Benz and BMW, the latter being touted as a pricing benchmark for the Giulia in the UK.

Alfa has been without a D-sector car in the UK for five years since the 159 was discontinued, and the programme to develop a successor has been delayed many times.

When asked if the Giulia is a ‘make or break’ car for Alfa Romeo, chief executive Harald Wester simply told the group of assembled journalists “yes”.

The range will launch in September, with a line-up of 150hp and 180hp 2.2-litre diesels, a 200hp 2.0-litre petrol and a range-topping 510hp 2.9-litre V6 available only in Quadrifoglio Verde specification.

We’re not quite sure of UK pricing and specification yet, so Alfa’s operation here already seems to be going down to the wire when it comes to making leasing companies aware so the car can be added in time for first deliveries.

You’re less likely to be told that it would have involved a costly re-engineering exercise to enable manual transmission to be combined with right-hand drive.

The next spec level is the Giulia Super, which has 17-inch alloy wheels, part-leather seats, steering wheel paddle shifters and enhanced interior trim.

The top-of-the-range Giulia Quadrifoglio is equipped with the 510hp 2.9-litre bi-turbo petrol engine and has a sports styling kit, 19-inch alloy wheels and bi-xenon headlights with active lighting, as well as leather and alcantara sports seats, a sports steering wheel with red power button and the Alfa DNA Pro selector with race mode.

There are luxury pack and sports pack options available on the 2.2-litre diesel.

As few auto versions were available on the launch event, we took our first drive in the 180hp manual. Although seeming to perform well enough, the six-speed shift was rather underwhelming, and engine noise was rather intrusive.

The auto is the ZF eight-speed transmission now used by a number of premium car manufacturers (including BMW and Jaguar), and this was a much better demonstration of the work Alfa has done on the Giulia.

Acceleration is rapid and smooth in the 180hp car, while the slick shift allows the Giulia to ride the wave of torque and slip into the next gear before the engine makes too much noise.

The steering is super direct, as we’ve come to expect from Alfa, which makes the drive seem more engaging, and on that note the ride is as firm as expected, although we were on optional 18-inch wheels.

The Giulia is competitive on CO2 emissions. Both 150hp and 180hp models have 109g/km with the auto gearbox, although Alfa will be launching an ‘Eco pack’ variant, which will bring down CO2 to 99g/km, matching the best-in-class BMW 320d ED auto.

Interior quality seems to be the best we’ve seen in an Alfa, and we hope this is sustained into its production life.

It’s rewarding to drive, like the best rear-wheel drive cars should be, and for some retail customers that will be enough.

But Alfa will also need to ensure its fleet support steps up to the level the Giulia and its customers deserve.