"The ride was both supple and composed over the sometimes broken road surfaces, while the handling felt just as agile and engaging as ever, with the well-weighted steering and precise shifts offered by its six-speed gearbox making it a very easy car to drive smoothly." 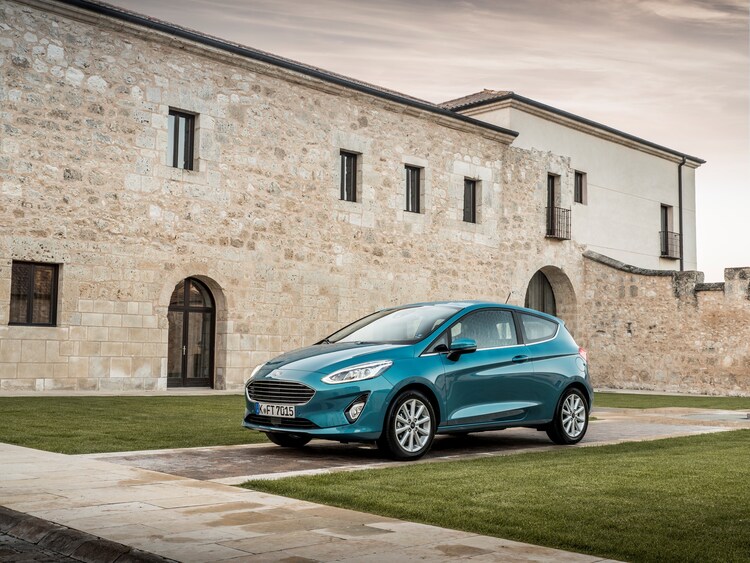 The new Ford Fiesta has some big tyres to fill. Since its launch in 2008, the outgoing model has sold around one million units, helping it become the UK’s best-selling car for the past eight years.

While the majority of registrations go into the retail market – last year it accounted for 61% of Fiesta’s 121,000 registrations – in 2016 it was also the top seller in the fleet sector with 47,000 sales – 17,000 more than its nearest supermini rival, Vauxhall’s Corsa.

This success has largely been based on its low running costs, wide model range, practicality and dynamic driving characteristics. However, the launch of new competitors, such as the excellent new Seat Ibiza, has seen the Fiesta fall behind in terms of quality and technology: two areas Ford has targeted with its new model.

The manufacturer says it has moved the Fiesta upmarket into a ‘new category of premium B-sector car’, through the improved quality of build and materials, as well as refinement, while it also claims it is the most technologically advanced small car on sale in Europe with 15 driver-assist technologies available.

For example, it is the first Ford to be available with Pedestrian Detection that can help prevent collisions at night, as well as an Active Park Assist System which can brake while parking hands-free.

So does the new Fiesta have the appeal and qualities to maintain its market leadership? Early impressions from the car’s launch event suggest it has.

Slightly larger than before, the new model’s styling is a subtle evolution of the outgoing car. It looks more modern and less wedge-shaped, but is unmistakably a Fiesta.

The changes made to the interior are more obvious. Perhaps the biggest criticism of the current Fiesta is its cabin, with the button-laden centre console and small infotainment screen looking dated alongside the interiors of newer superminis.

The Fiesta addresses this with a completely redesigned cabin. Significant changes include the number of buttons in the centre console reducing by almost 50% and an eight-inch touchscreen added in some trim levels.

In the main, materials used are much improved, although the hard plastic used in some areas, notably on the door trims, detracts slightly from the premium feel.

The diesels are the most efficient models, with the 85PS models offering CO2 emissions from 82g/km and official combined fuel economy from 88.3mpg and the 120PS producing 89g/km and 80.7mpg respectively.

However, 90% of UK Fiesta buyers currently opt for petrol models, with 60% choosing 1.0 Ecoboost engines: Ford expects this to continue, with the most efficient model being the 100PS variant with 97g/km and 65.7mpg.

An Active crossover model, with a 17.5mm raised ride height and styling accessories such as roof rails and black plastic wheelarches, and the hot ST will follow in April.

We drove the 1.0 Ecoboost 140PS Titanium model. Its seat and wheel adjustment made it easy to find a comfortable driving position, with all-round visibility also good.

On the move, the Fiesta has lost none of its appeal. The ride was both supple and composed over the sometimes broken road surfaces, while the handling felt just as agile and engaging as ever, with the well-weighted steering and precise shifts offered by its six-speed gearbox making it a very easy car to drive smoothly.

Overall, the new Fiesta is an impressive package. It has retained all of the endearing qualities of its predecessor while addressing all of its weak points. In short, it is well placed to continue its dominance in the supermini sector.