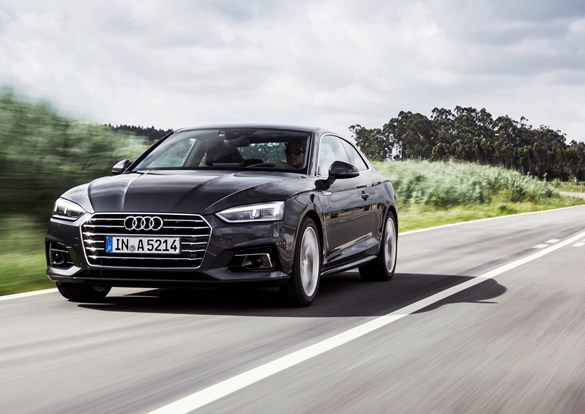 Traditional coupés like the Audi A5 might not be as common a sight on company car choice lists as they once were, but they can be important tools in staff retention.

Cars that manufacturers call ‘coupés’ are becoming more prevalent in varying shapes and sizes, some based around a saloon or estate template, others adapting the SUV silhouette.

Indeed, there will no doubt be more user-chooser (and fleet operator) interest in a Sportback (five-door) version of the A5, assuming that version will be replaced in due course, but the new A5 Coupé will at least whet our appetites and give us some idea of what to expect.

For the second-generation of this model, Audi has ex- tended the wheelbase and changed the proportions with a slightly longer bonnet and slightly narrower body.

How a coupé looks has a stronger bearing on why drivers would choose one than with many other car types, and the changes here add a degree of elegance that was perhaps lacking in its predecessor.

There is more interior space and a slightly larger boot,  creating even more distance between the A5 and the luggage capacity of its closest rivals, two-door versions of the BMW 4 Series and Mercedes-Benz C-Class.

Front-wheel drive versions of the A5 now come with a seven-speed S-tronic dual-clutch transmission rather than a Multitronic CVT. And new technology that allows the auto transmission to freewheel when coasting in cruise control helps save fuel. Other fuel-saving technology can be found in the Quattro system (optional on and absent from the 2.0 -litre TDI featured here), which is now an ‘on-demand’ all-wheel drive format, helping reduce fuel consumed in friction losses.

Although we spent some time in the V6 3.0-litre TDI quattro, the bulk of A5 Coupé sales will be the four-cylinder 190hp 2.0-litre TDI, which we tried with S-tronic.

Audi’s new ‘virtual cockpit’ configurable high-definition instrument panel is offered as an option, and I get the impression it’s one of those that, because of its relatively low cost (£450), it will be worth adding to make the car more desirable as a used model at defleeting time.

The 2.0-litre TDI is exceptionally refined and offers plenty of performance for its size. With an entirely new suspension set up, also found in the latest A4, the A5 Coupé offers a much more comfortable ride than its predecessor, without sacrificing anything in composure.

We expect the more practical Sportback to be an even more desirable model for fleets.