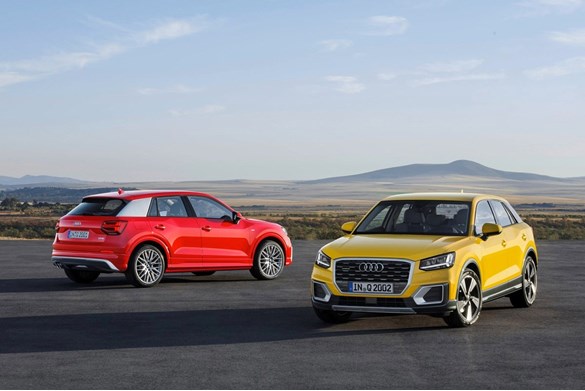 Much of Audi’s growth over the past 20 years can be put down to ensuring it has a presence in key sectors of the market, as well as being relatively a early adopter of emerging niches.

The ‘relatively’ qualifier is necessary, as Audi wouldn’t treat a car from a mainstream manufacturer as a rival.

Therefore, the Q2, which is Audi’s first compact SUV (or ‘crossover’ as the company is insisting on calling it), currently has no premium-badge rival.

Based on the Volkswagen Group MQB architecture (from which we’ll see a new Seat Ibiza and Seat compact SUV in 2017), the Q2 is set to arrive in the UK in November, offering power outputs from 115hp to 190hp in petrol and diesel variants.

And, in a break from the design-by-numbers that Audi is often criticised for (in the media, if not by customers), the Q2 has a lot more chiselled details and edges than any other model in the range. Just as well, as the conservative styling which has served it so well might be seen as too boring for the younger audience Audi is targeting with the Q2.

Although Audi is blind to any rivals for the Q2, you could make a case for the Mini Countryman, Jeep Renegade and one or two other B-sector-based SUVs as having drivers who might be interested in the Audi, as well as people looking for a little more room (and more upmarket image) than a conventional small car provides.

The Q2 is available with technology found in larger Audis, such as the ‘virtual cockpit’ instrument display, although here it comes as part of a £1,500 technology pack rather than the £400-£500 option it is in the TT, A4 and A5.

There’s also a head-up display, Audi pre-sense warning with autonomous braking initiation and pedestrian recognition. It can also be specified with adaptive cruise control with a ‘stop and go’ function in traffic, which we used in a particularly congested 30 minutes of our test route.

The interior isn’t especially roomy behind tall front seat occupants, although the minimum luggage capacity of 405 litres is decent in a small car.

Power from the 115hp 1.6-litre TDI is decent on the flat, but seems to labour somewhat when pulling the Q2 uphill. Audi has yet to reveal CO2 emissions for some versions of the Q2, including this one, and we suspect it has been geared to maximise fuel economy and cut CO2.

It was our least favourite engine of those we tried in the event, preferring 115hp and 150hp petrol variants, the former with three cylinders, the latter with cylinder-on-demand technology.