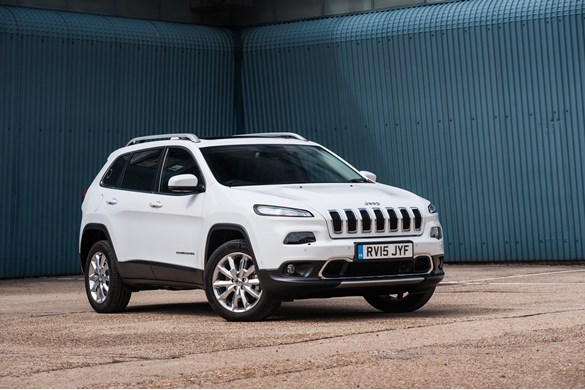 Even though the Jeep Cherokee is only a year old, this new 2.2-litre MultiJet diesel engine breathes a new lease of life into the vehicle range.

Prior to the introduction of this engine, the Cherokee was a little underpowered but this power plant is refined and produces 197bhp – a huge step-up compared to the 2.0-litre unit with 140bhp.

Jeep expects to sell around 3,000 Cherokees in a full year, with 80% of these powered by the new 2.2-litre engine mated to the nine-speed 'box, while the most sought-after trim will be Limited grade. Around 25% of all Cherokees sold in the UK will go direct to the fleet market, with the majority on contract hire and leasing deals.

There have been no cosmetic changes to the Cherokee – all the tweaks have been under the bonnet – so let’s get straight down to business.

This new MultiJet engine, built by Fiat, is appearing for the first time but, according to a Jeep spokesperson, it may not be the only car that uses this new power plant.

Producing 197bhp and 440Nm of torque, the engine certainly has plenty more oomph than what was offered previously. However, it’s not just power – delivery is smother, it’s quieter and, when mated to the nine-speed automatic gearbox, the Jeep Cherokee is a really pleasant driving package.

Jeep is aiming to put pressure on rivals with the Cherokee and is looking to do battle with Volvo’s XC60, the BMW X3, Audi’s Q5 and the Mercedes GLA.

To put this version of the Cherokee into perspective, the P11D value is slightly lower than a Volvo XC60 with a similar trim. The bonus with the Cherokee is that on this Limited trim equipment levels are high.

The new 2.2-litre MultiJet unit is matched to Jeep’s Active Drive I system, but can be specified with Active Drive II on the Limited 200hp model while both models are capable of towing up to 2.5 tonnes.

Active Drive I offers Jeep’s original rear-axle disconnect system, which improves fuel economy, while Active Drive II adds a two-speed power transfer unit for 2:92:1 ‘low range’ capability and hill-descent control. If you are purchasing the Cherokee to be used as an off-road workhorse, then Active II is the kit for you.

Jeep has work to do on the costs front, but the  drive is certainly much improved thanks to the new MultiJet engine.