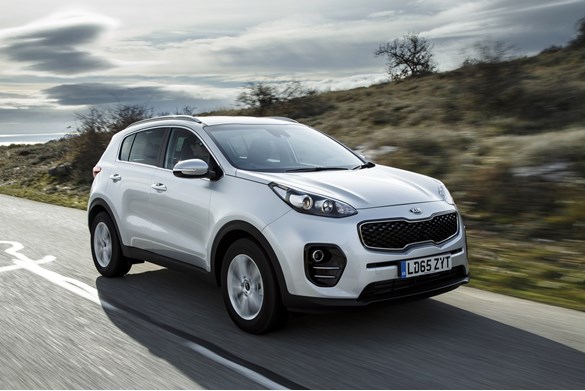 The last Sportage was the car that broke down barriers for Kia in the fleet market.

Although earlier Kias had been able to carve out niches for themselves as low-cost workhorse estates, job-need hatchbacks or compact pool cars, the Sportage had genuine appeal for user choosers.

Launched in 2010, it was the first Kia to have realised the vision of the company’s then chief designer, with the so-called ‘tiger nose’ grille, swept back headlamps and elegant proportions.

Schreyer, who had the original Audi TT and other models at the premium brand on his CV, thereafter gave models in the Kia range more of a personality.

The Sportage in particular seemed to have the right ingredients to win over user choosers, as well as making the market-leading Qashqai at the time look a little frumpy.

Schreyer has since been promoted, overseeing design at Kia’s sister brand Hyundai and taking on a role as one of the company’s three presidents.

The Sportage was popular among retail and fleet buyers, although with more recent crossovers offering lower CO2 emissions (the outgoing Sportage was never able to sink below 130g/km) its star had begun to wane.

The new Sportage, on sale this month (February), tackles that issue, and brings with it greater comfort, a more upmarket interior and a broader choice of engines.

The fleet-favourite 1.7 CRDi diesel remains, with 115hp as before, but with CO2 emissions now at a class-competitive 119g/km (down from 135g/km). Kia is also offering a 136hp 2.0-litre diesel with four-wheel drive as standard, as well as a range-topping 185hp version.

A new turbocharged 1.6-litre petrol engine is also offered, in front-wheel drive only. The 2.0-litre diesel is offered with a six-speed auto option, while the petrol engine comes with a seven-speed dual-clutch auto as an alternative to the standard six-speed manual.

Four-wheel drive variants are identified by the KX prefix on the equipment grade, and are offered on all but the 1.7 CDRi variants.

A stiffer body shell and a number of new specifications for suspension and steering systems make the Sportage feel more connected with the driver and the road, improving stability and responsiveness.

The sharper steering responses are due in part to a motor fixed to the steering rack rather than on the steering column. Kia likens it to trying to steer a blindfolded person: directing them by the waist rather than by the shoulders allows them to follow a more precise path.

Ultimately, like all the best crossovers, there’s a decent balance of comfort, refinement and agility with the Sportage, and a noticeable improvement over its predecessor

There are new safety systems offered on the Sportage, although, sadly, key ones are only available on the range-topping 4 and KX-4 variants.

All models from grade 2 and KX-2 have Lane Keep Assist to alert a tired driver who may be about to stray into the path of a vehicle approaching from behind; High Beam Assist to switch between full and dipped beam automatically when there are other vehicles in the vicinity; and a Speed Limit Information function within the instrument cluster.

But only 4 and KX-4 versions are fitted with autonomous emergency braking, blind spot detection, and rear cross traffic alert to warn a driver who is about to reverse out of a parking bay that there is a vehicle approaching.

Given that we know some big fleets are saving money from autonomous emergency braking on their company cars, it’s a shame Kia doesn’t offer this as an option lower down the range.