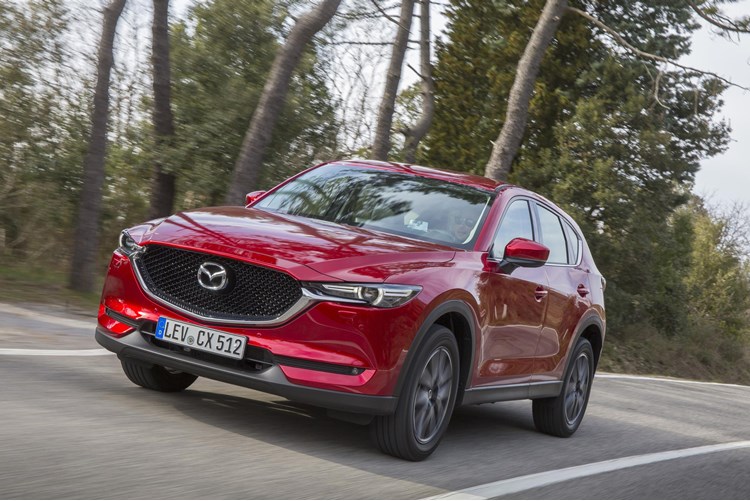 It’s difficult to stand out in the crowded SUV sector. A good crossover needs to tick a lot of boxes – fuel economy, driver appeal, practicality, ease of driving and low running costs are key criteria for fleet operators.

The Mazda CX-5 has always been a stand-out car for the way it drives, thanks to its ‘Jinba Ittai’ driver-and-car-as-one ethos. This extends from the powertrain through the chassis set-up to the interior and driving position.

In the new model, particular focus has been put on improving refinement, to give the car a more premium feel. The original CX-5 was designed with a youthful image but the new car takes on a sportier demeanour.

Enhancing the driving experience has impacted emissions. The most frugal CX-5 now emits 132g/km of CO2, jumping from the old model’s 119g/km. This could see it wiped off restricted company car choice lists – where 130g/km CO2 caps are not uncommon – but Mazda expects sales to remain stable with a 50:50 fleet to retail split.

The extra emissions are largely due to a heavier kerb weight – resulting from increased sound-proofing, thicker glass and extra technology. However, the manufacturer says in real-world economy tests the new CX-5 outperforms the old model by 4.1%.

Customers can choose from a 2.2-litre Skyactiv four-cylinder diesel engine with either 150PS or 175PS. There is also a 2.0-litre petrol engine with 165PS.

The CX-5 goes on sale at the end of June priced from £23,695 for the petrol in SE-L Nav trim, while diesels cost from £25,695. Standard equipment includes LED headlights, auto power-folding door mirrors, dual-zone climate control, digital radio and a seven-inch touchscreen display with Mazda’s integrated navigation.

The only other trim on offer is range-topping Sport Nav which Mazda predicts to be the best seller for both retail and fleet customers. It comes with a leather interior, keyless entry, adaptive cruise control and a Bose audio system, plus electrically adjustable heated front seats and heated steering wheel.

Sport Nav models are priced from £28,695 when paired with the 2.2-litre 150PS engine, a manual gearbox and front-wheel-drive. This means a driver should expect to pay around £130 per month in BIK tax (20% taxpayer).

We tested pre-production variants of all the powertrains and found the frugal front-wheel-drive 150PS diesel to be the most impressive all-rounder. It’s expected to return 56.4mpg and in capable of accelerating to 62mph in 9.4 seconds.

On the road the CX-5 is well composed and impressively quiet. The engine delivers strong performance from low revs and is complemented by a slick six-speed manual gearbox.

Body roll is well controlled making the CX-5 competent in the corners. Mazda has fitted a system called G-Vectoring Control which moderates engine torque when cornering at higher speeds to maximise grip.

The more powerful diesel engine comes with all-wheel-drive (optional on the 150PS) which bumps the CO2 figure by another 10g/km to 142g/km. It will provide greater confidence in poor weather conditions, but scuppers dry-road handling and offers little extra performance given its increased running costs.

Across both outputs the diesel engines have been fitted with a new noise-reducing Natural Sound Smoother technology, which cuts start-up and idle reverberation. The difference is noticeable and, combined with the increased sound proofing, interior noise levels are low.

The petrol engine is the least efficient, managing just 44mpg with CO2 emissions of 149g/km. Petrol models accounted for just 16% of previous CX-5 sales and the engine feels gutless in comparison to the diesels. With no turbocharger to boost performance or efficiency it would be a poor choice for fleet customers.

An automatic gearbox is available across the range for an extra £1,500; when fitted to the petrol engine it improves efficiency and performance but on the diesel the figures head north, with CO2 emissions from 147g/km.

The CX-5 still leads the class as a driver’s car but its higher emissions are a significant setback. The only saving grace is its list price which is around £2,000 lower than that of equivalent Škoda Kodiaqs and Volkswagen Tiguans, giving it a company car tax advantage.