"This Rexton is a great step forward from its predecessor in styling, perceived quality, cabin layout and technology. " 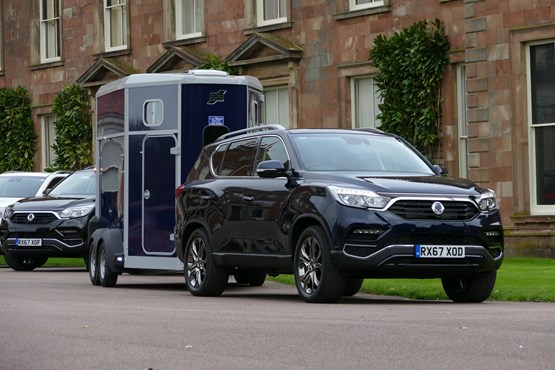 The SsangYong Rexton Ultimate is a proper, tow a trailer or caravan 4x4 workhorse with no SUV pretensions, as Tim Rose discovers.

The SsangYong Rexton has a reputation as a 4x4 workhorse, cheap to buy and rather agricultural, yet capable of towing and traversing anything drivers could desire.

Now there’s a new Rexton on the block. It’s a higher quality product, but it has not been ‘SUV-ified’.

Many other brands which once had 4x4 workhorses have evolved their products away from the type, making them handle better on the road, improving fuel economy and reducing emissions.

Doing so has broadened their driver appeal.

But the consequent reduction in towing and go-anywhere capabilities has left some niche customers behind, and SsangYong wants them, as evidenced by its displays at national caravanning shows, equestrian meets and agriculture events.

Rexton fundamentals have not changed. It will tow 3.5 tonnes, sufficient for a double-axle horse trailer or huge caravan.

It is a proper 4x4 – on the media launch we drove it in an overgrown, long-abandoned quarry, utilising low ratio four-wheel drive to climb steep, rutted inclines thick with mud and allowing hill descent control to safely bring the car down.

And it is cheaper than the competition. Rexton starts at £27,500, around £5,000 lower than an equally capable Mitsubishi Shogun and some £16,000 cheaper than a diesel Land Rover Discovery.

This Rexton is a great step forward from its predecessor in styling, perceived quality, cabin layout and technology.

Dependent on the model grade, it has up to nine airbags, lane departure warning, forward collision warning and autonomous emergency braking.

The cheapest grade, EX, features an eight-inch touchscreen with infotainment, including Apple Carplay and Google Android Auto connectivity plus a reversing camera.

ELX is available with five or seven seats, and Ultimate is five-seat only.

SsangYong claims Rexton is quieter and more powerful than the old model, thanks to better cabin sealing, a slightly sleeker shape and the 2.2-litre turbodiesel and seven-speed auto transmission sourced from Mercedes-Benz.

Test-drives will show it’s far from peaceful when cruising at A-road speeds, however. Running costs are a weakness, too – 30-odd mpg and £140 annually for VED band K have to be budgeted for.

But drivers will forgive it, because it will do so much else for them, and the five-year warranty gives them some peace of mind with such a relatively unknown Korean brand.

And with its 820-litre boot, which expands to 1,977 litres with the rear seats lowered, they could always rest up in the Rexton when required.

Steve Gray, marketing director, said there are no plans to offer a commercial vehicle derivative. However, in 2018 there will be a Rexton-derived pick-up.