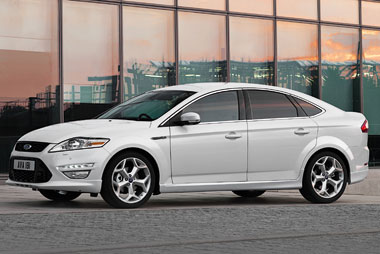 Life has become tough for cars like the Ford Mondeo.

Despite this exodus, it remains one of the most popular cars in its sector and a major refresh for 2011 helps it compete with upmarket rivals.

Diesel engines were upgraded before cosmetic changes arrive in October, while the saloon model was dropped at the same time.

These are carried over to the new model, but are joined by more efficient petrol engines on top equipment grades.

It’s possibly a little high to have strong fleet appeal, but nonetheless, with PowerShift dual clutch gearbox as the only transmission offered these versions fare quite well against similar powered opposition.

They are also both significantly less costly from a tax and fuel consumption perspective compared to the 2.3-litre auto and 2.5T that they replace.

Indeed, the PowerShift option on the 2.0 TDCi only adds a further 10g/km to CO2 emissions, ensuring diesel autos remain well below the 160g/km 20% write down threshold.

Ford expects PowerShift to have stronger appeal on the Mondeo than the previous torque converter automatic.

This model has CO2 emissions of 159g/km and fuel consumption of 47.1mpg on the combined cycle. Both EcoBoost and 2.2 TDCi are available only in the high-end Titanium series.

The 2011 Mondeo has carry-over pricing for the refreshed model (Titanium models increase by £200 to reflect extra equipment fitted), while prices for the new top engines will be published close to their November availability.

Ford has made subtle changes to the Mondeo’s styling: a new bonnet, LED daytime running light availability and a reprofiled lower grille bring the model into line with recent changes to the Galaxy and S-Max.

The interior has also undergone a makeover, with greater use of soft-touch materials, a redesigned instrument cluster and heating controls with ‘satin black’ trim on the dashboard centre instead of gloss black, and a new Windsor leather option.

New safety technology is also available, including a lane-departure warning system and a blindspot alert.

Cars with automatic headlights also come with main-beam assist, which detects oncoming traffic or illuminated rear lights ahead and automatically dips the main beam until the traffic has passed.

The Mondeo always offered an excellent balance of ride and handling and little has changed for 2011. It’s still equally capable of munching motorway miles or being hustled along a country road with supreme composure.

The Mondeo has been a class act from the start and still does a fine job.

This refresh boosts its safety and environmental credentials.

There is no more appealing
mainstream upper-medium car.