"The Nexo is smooth and silent on the road, with brisk acceleration and responsive behaviour." 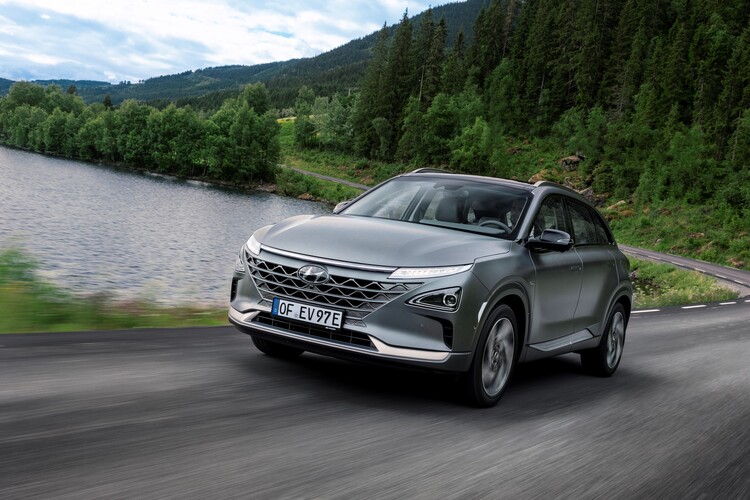 Hyundai was the first manufacturer to put a hydrogen fuel cell car into mass production in 2015.

The ix35 FCV packaged fuel cell technology into a medium SUV and probably would have sold more had there been any hydrogen refuelling infrastructure worthy of note available.

This has been a ‘chicken and egg’ situation: manufacturers have been reluctant to roll out hydrogen fuel cell vehicles due to a lack of infrastructure; supply companies have been shying away from significant investment in hydrogen refuelling sites given so few vehicles need them.

Three years ago, Toyota launched the Mirai fuel cell vehicle in the UK, with a monthly lease package that included maintenance and fuel to make the cost more manageable.

Procurement remains localised to areas within reach of a hydrogen refuelling point, but there has been interest from public sector fleets, and London’s Metropolitan Police has recently taken delivery of several as it seeks to reduce its reliance on diesel vehicles.

Next year, Hyundai will introduce its second-generation mass-produced hydrogen fuel cell car in the UK.

The Nexo is a model in its own right as opposed to installing the technology into an existing vehicle.

Introducing a completely new model means Hyundai can take advantage of the latest technology in the powertrain as well as safety and convenience features that customers expect on a car with a likely £60,000 price tag (before grants and other qualifying incentives).

Hyundai has worked harder on aerodynamics and the materials used to help reduce the Nexo’s impact on the environment.

The model is almost as long as the Santa Fe large SUV. Its new powertrain is lighter and more efficient, with a driving range of up to 414 miles on the WLTP combined cycle.

The Nexo is smooth and silent on the road, with brisk acceleration and responsive behaviour.

Inside, the upper half of the dashboard looks cutting edge with a large central touchscreen and digital instrument display, but the floating centre console (which allows storage space beneath) is awash with buttons for audio and climate controls.

They are clearly marked and are of high quality, but it gives this part of the Nexo the feel of a Lexus from around 10 years ago.

The Nexo is clearly up-to-date with other technology. Autonomous emergency braking, lane-keeping assistance, blindspot alert and remote parking assistance are all available.