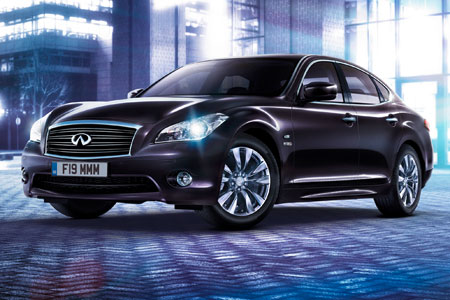 The manufacturer’s latest offering has rectified this with emissions of 159g/km, making it eligible for the full first year’s capital write-down allowance (although this benefit won’t last too long as from April next year the threshold will fall to 130g/km).

Having access to Nissan’s European engineering centre in Cranfield has undoubtedly helped Infiniti.

The engineers have worked hard to achieve the reduction from 162g/km to 159g/km by making the electric motor run longer before the engine cuts in.

Infiniti claims it can travel up to 50% of its time on electric-only in an urban environment.

But what impresses most is not the amount of time it spends in full EV mode, but the situations where the electric motor can take over.

It seamlessly kicked into full electric mode when coasting at 60mph.

Despite this engineering wizardry, there is no disguising the fact the M35h is still far behind rivals in terms of
CO2 emissions.

All are two VED tax bands lower than the M35h. So why choose the Infiniti?

The manufacturer believes one of its advantages is performance.  Although it doesn’t have the appearance of a high-powered car (it has 18 inch wheels to aid emissions rather than classic over-sized wheels of a performance car) it’s actually the fastest M car.

It can also claim to be the world’s fastest accelerating full hybrid, reaching 0-62mph in just 5.5 seconds.

Arguably, the 5 Series and GS 450h aren’t massively adrift in terms of performance, though, each speeding to 62mph in 5.9 seconds.

In terms of fuel consumption, the M35 returns 40.9mpg on the combined cycle, impressive given its power. We achieved close to 40mpg.

However, its competitors claim slightly better fuel consumption – they are all around the 44-46mpg mark which equates to savings of up to £1,500 over 80,000 miles.

Infiniti says the M35h’s main advantage, aside from performance, is specification with 55 premium standard features.

The Business Edition (which is a limited edition and is available until December this year) also comes with free connectivity (Infiniti’s navigation system) for around the same price as the GT grade.

Inside it oozes luxury with real silver powder in the wood panels, a heated steering wheel and even a ‘forest air’ option on the air conditioning and there are plenty of safety features too.

The question is whether all this will be enough to tempt company executives out of Infiniti’s German rivals.