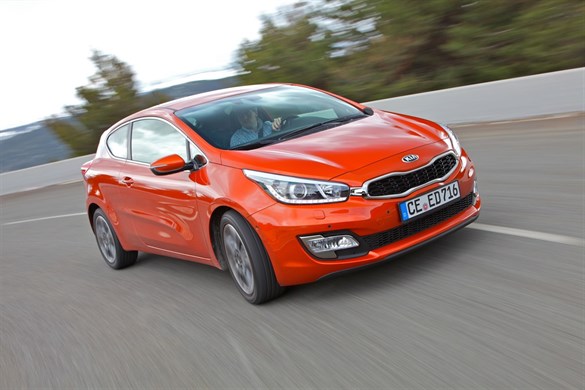 Fleet buyers are expected to snap up most examples of a new coupe model from Kia – even though it is more than £2,000 dearer than the car it replaces.

Officials at the South Korean firm believe a combination of sleek styling and comprehensive equipment will prevent the price hike from putting a brake on sales of the latest version of the Proceed, the three-door version of the popular Ceed hatchback.

“Our research shows that aspiration plays a large role in the cars chosen by company drivers and we think our new model still brings keen competition to rivals like the Astra GTE and the Renault Megane Coupe.

“These cars always seem to carry higher prices than the hatchback models they are based on, but this is not the case with the Proceed. Even though it is very different from the standard five-door hatchback, we're charging nothing extra for the higher image it portrays,” said Kia Motors UK brand manager Jean-Baptiste Merkel.

Likely to account for just 15% of Ceed registrations, the Proceed is the halo model of the European-built C-segment range. Described as the most emotionally-charged car yet from the fast-growing firm, it is available with 1.6-litre petrol and diesel engines and a GT variant will be available in summer. 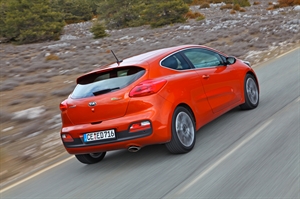 However, a 100g/km emissions performance and the potential to cover more than 74 miles on a gallon of fuel promise to make the lead-in version we drove at the model introduction in France the automatic fleet choice.

“Compared with the outgoing version, the new car is longer, lower, looks terrific and is almost totally different compared with the five-door model. And the fact that it qualifies for free VED and exemption from the London congestion charge should add to its appeal as a strong contender for fleet registrations,” said Merkel.

To further differentiate it from five-door and Sportswagon versions, the entry Proceed appears anything but a base-level car in S trim designation, which includes stop-start technology,16-inch alloy wheels, cornering lights, LED daytime running lights, fog lamps and puddle-lights in the door mirrors. Chrome surrounds are a distinctive touch to side windows, which use privacy glass. 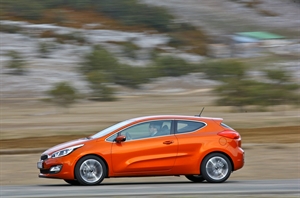 Inside, black upholstery and headlining are backed by piano black fascia and door trims and leather is used on the steering wheel, gear lever and handbrake. Air conditioning, automatic lights, heated and folding door mirrors, cruise control, a multi-function steering wheel, reversing sensors and a trip computer are all included.

Robust performance comes from a revamped engine that is more subdued at all speeds and particularly relaxed at cruising speed in a high sixth gear. Cornering agility is excellent, but Kia's flex steer system, which has a choice of comfort, sport or normal modes, works best if it is left in the latter setting.