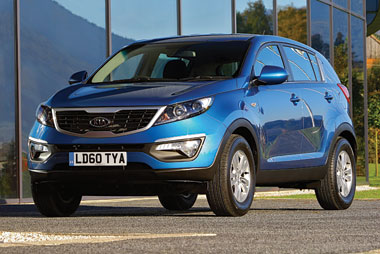 You can be forgiven for taking a closer look at the badge on the Kia Sportage, because on first impressions you doubt whether it really has been made in Korea.

And there is a modicum of truth in that assumption as German designer Peter Schreyer, who designed the original Audi TT coupe, created this eye-catching SUV.

The same attention to detail is evident inside, where there is a big improvement on the manufacturer’s previous offerings. OK, there’s the odd piece of plastic trim, but it’s not enough to detract from the car’s surprisingly upmarket feel.

It’s roomy too, which adds to that sense of opulence, and given its high riding stance it’s surprising to see how it actually drives like a much smaller car with plenty of grip and a composed ride.

Our test version is the 1.7 CRDi Sportage 2 2WD with a P11D price of £20,300. That represents excellent value for money coming as it does with long list of standard equipment, including alloy wheels, air conditioning, power windows, cruise control, daytime running lights, cornering lights, fog lamps and auto wipers as standard, not to mention the firm’s trademark seven-year warranty.

Fleets looking to minimise their motoring bills should consider our stop/start equipped version, with a claimed combined of 54.3mpg.

We’re currently squeezing 43.2mpg out of our test car, but when it’s spending most of its time on the motorway the return is a lot better.

All in all a welcome addition to any company’s car choice list and one which may well prove a popular choice.