"Mazda promises low running costs from an anticipated hike in residual values and excellent safety thanks to a host of standard-fit technology." 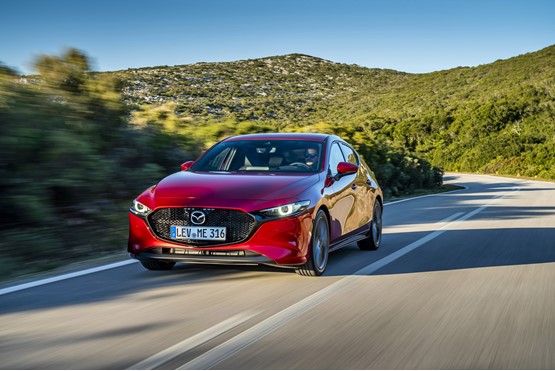 Know that feeling when you replace a lid on a pen? The satisfying click that tells you the lid is in place? That’s the feeling Mazda is trying to recreate with the switches on the new Mazda 3.

The descriptive narrative from Mazda's designers and engineers encapsulates their obsessive attention to detail as they look to surpass the expectations of existing and potential customers in a highly competitive market.

Ask programme manager Kota Beppu for the three things that will make these people – particularly those currently in premium cars – consider the fourth generation Mazda 3 and he waxes lyrical about design, seats and the sound system. “It marks a new era for Mazda,” he says.

So, the design. The new Mazda 3 will be available as hatchback (from launch) and saloon (in Q4); they are different cars, sharing only the front windscreen, bonnet and headlights.

In Mazda marketing-speak, the hatchback has the sporty, emotional personality, the saloon is sleek and elegant. Both are handsome, and eschew the trend for myriad panel creases in favour of curves intended to cast light and shadow across the surface.

The interior features high-quality materials and those tactile switches. The layout is simple and uncluttered, with heater controls below the sat-nav screen, and a rotary control between the seats surrounded by four short-cut buttons, handbrake button and volume control. It’s a minimalist and stylish architecture.

The seats are exceptional. Mazda studied the spine position when a person walks and mirrored the natural S-shape in its seat design, with added pelvis support. It will, claims Beppu, result in less fatigue and greater driving enjoyment. We agree; those travelling long distances will do so in absolute comfort with no stress on the body.

Mazda’s work on noise and vibration has created an extremely quiet car, isolated from road and wind noise. The sound system is class-leading, thanks to extensive evaluation about the way people perceive noise. Mazda found that not only are people sensitive to volume, they are also affected by the direction it comes from.

Consequently, it moved the speakers to new positions to produce a far more dynamic sound.

OK, that’s all great for the driver experience, particularly as Mazda has set its sights on user-choosers, but what about the fleet operator?

The car is launched (orders open now, first deliveries in May) with two new engines.

The 122hp 2.0-litre Skyactiv-G petrol has correlated NEDC emissions from 117g/km (full WLTP will be 136g/km) with fuel consumption of 55mpg; the 116hp 1.8-litre Skyactiv-D diesel starts at 107g/km (WLTP: 130g/km) and 69mpg (but doesn’t require AdBlue, saving money). Both are refined – the diesel especially so – but they are also underpowered and, for the diesel, efficiency falls short of the best.

Mazda won't be too concerned about the diesel performance - it will account for just 8% of sales, although most of those will go to fleet.

The carmaker will play its trump card towards the end of the year when it introduces its much-vaunted Skyactiv-X engine, which features Spark Controlled Compression Ignition (search fleetnews.co.uk for details) and a new mild hybrid system (also on the ‘G’).

It will not reveal expected emissions, other than to say they will be 20% lower than a conventional petrol, which suggests on correlated NEDC of sub-95g/km.

In the first year, fleet will take 23% of volume, although this proportion could rise next year with the Skyactiv-X.

Safety comes as standard, including first introductions of driver monitoring, which recognises if a driver becomes drowsy or if they take their eyes off the road (even at night or if they are wearing sunglasses), front cross traffic alert and cruising/traffic support, which offers acceleration, steering and braking assistance in traffic. Every model also gets cruise control and head-up display.

Mazda has worked hard to get cost of ownership down. With efficient engines, high specification and lots of safety kit as standard, it anticipates higher residual values compared to the outgoing car – further buoyed by putting no cars into short-term rental - and a good insurance ranking, resulting in lower premiums.

Oddly, the one element not talked up by Mazda at the media launch is arguably the crowning glory: the driving performance. It’s outstanding, a match for the best in the sector.

Handling is exquisite, while the firm chassis glues the car to the road – albeit with a slight trade off on smoothness over potholes. Whether negotiating bends or relaxing on the motorway straights, the Mazda 3 doesn’t miss a beat. It’s both great to drive and easy to drive.

P11d pricing starts at £20,370 for the SE-L petrol, although the majority of fleet sales are expected to be for the highly equipped SE-L Lux, Sport Lux and GT Sport, priced £21,470-£24,370 (petrol, manual). GT Sport Tech tops the range; all trims come with auto and manual transmission options.

The Mazda3 is unarguably one of the best Mazdas ever; with the forthcoming Skyactiv-X engine it could be the very best.