"Officially, the car promises 67.3mpg. During our time we managed to achieve an indicated 72mpg, without much fuss" 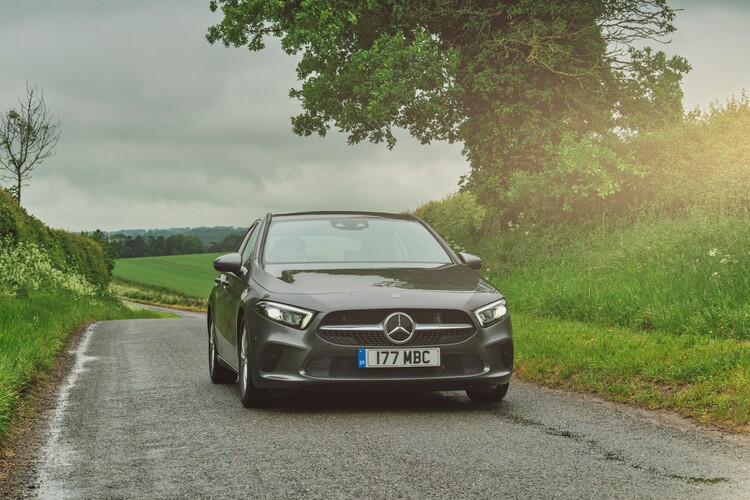 Mercedes-Benz has beaten its biggest rivals by getting the new A-Class to market ahead of the BMW 1 Series and Audi A3, which both launch next year.

Compared to its ageing opponents, prices for the new baby Benz appear to start high - at almost £26,000 for the base-model diesel - but you do get a lot for your money.

The mid-range Sport trim – which isn’t actually very sporty – is the expected bestseller. Priced at £27,340, it comes with climate control, sat-nav and adjustable drive modes.

The A-Class’s motorway manners are, predictably, top-drawer. You can drive it for hour after hour with no feeling of fatigue.

Mercedes has worked wonders on the 1.5-litre Renault-derived engine in the A 180 d. It is super smooth, quiet and delivers a surprising amount of grunt.

Twinned with a seven-speed dual-clutch automatic transmission, the A 180 d Sport emits 111g/km.

Fuel efficiency, one of the most important factors in this segment, is one of the A-Class’s best attributes.

Officially, the car promises 67.3mpg. During our time we managed to achieve an indicated 72mpg, without much fuss.

Even on country lanes and at higher speeds we were impressed that the A-Class rarely dropped below 60mpg.

The throttle mapping is a little lively for our liking, though. It certainly helps make the A-Class feel faster than it is, but also means the car jerks away if your footwork is a little on the clumsy side. Switch to ‘Eco’ mode and things are more supressed, although in the mid-range the car feels more lethargic.

The new MBUX infotainment system comes as standard and has been designed for the younger smartphone-savvy generation. It includes connected services such an internet radio and traffic updates plus voice activation, which works like Amazon’s Alexa or Siri.

“I’m sorry, my engineers are German,” it quips back.

The system uses natural speech recognition and can be used to program the sat-nav and adjust the temperature or radio.

One area where we urge fleet customers to be cautious is the standard model comes with two seven-inch screens (see gallery), not the heavily advertised 10-inch units that adorn the marketing material.

The larger screens come as part of the £2,395 premium pack and it’s well recommended. The smaller screens don’t quite live up to the higher-class interior and look a little on the cheap side.

Interior space is good. The seats are mounted low, giving a sportier feel. A boot capacity of 370 litres is more than you get in a current BMW 1 Series or Audi A3.

Overall, the interior quality is very high, except for some cheap feeling indicator and wiper stalks and a rather flimsy parcel shelf. Again, base models feel less special than the highest grade AMG Line.

Petrol models are cheaper, with prices starting at £22,850 for the 1.3-litre A 180 with a manual gearbox. They also offer lower company car tax but the diesel will achieve the best efficiency and offers no refinement shortfall.