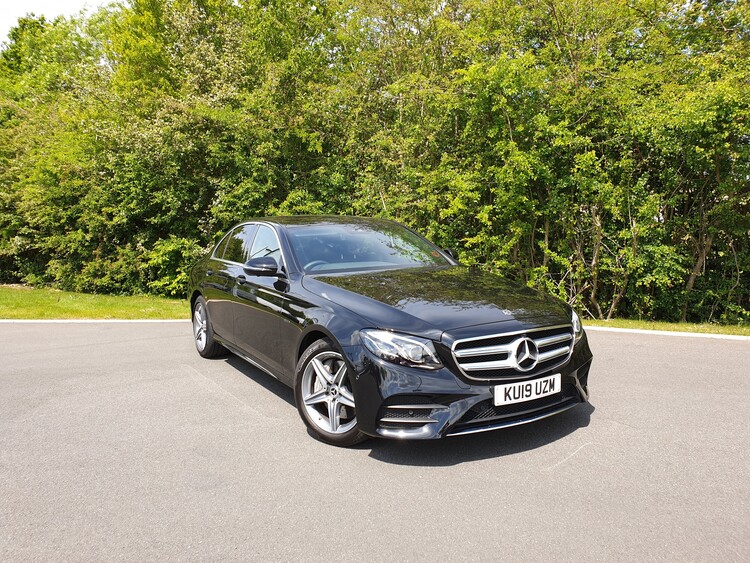 After six faultless months with the Mercedes E 300 de I have to ask myself, have I been a responsible plug-in hybrid driver?

I’ve been charging the car as often as I can, including at home, but only where it doesn’t inconvenience me too much – so not midway through a journey.

If you don’t plug it in, the car intelligently chooses when to charge itself on the move and, of course, captures waste energy when braking – so the battery is never completely flat. It always keeps enough charge to operate like a normal hybrid; boosting acceleration and running on electric in stop-start traffic.

A full charge registers an available range of 22 miles, but I have been delving into figures assembled over the past six months and these indicate a rather more impressive performance from the battery. 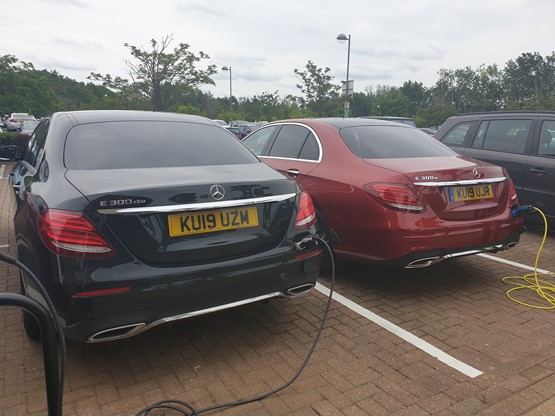 Looking at operating hours, the diesel engine was switched off for 60% of all the time I spent in the car – suggesting a significant reduction in tailpipe emissions.

Overall, I averaged 63mpg, which may not seem mind-blowing at first, but this is not an economy-focused car.

It weighs more than two tonnes, is packed with technology and will put most hot hatchbacks to shame.

I’m not the most efficient driver either, making full use of the available power where safe (and legal) to do so.

With a more eco-minded pilot, I’m confident the car would average at least 70mpg.

It’s not uncommon to see economy figures way into the 80s on long journeys, where the diesel engine has a major advantage over its petrol rivals.

Combine that with its effortless drive, cheap BIK and high kerb appeal and I can’t see what more a company car driver could want. I know I’m going to miss it terribly.

It has proved its worth as a sound choice for both business and driver, it delights with its blend of refinement and performance and hasn’t put a foot wrong in the past five months.

No car is perfect though, and our long-term E-Class does have a few downsides.

While saloon cars aren’t the most practical, Mercedes’ decision to stick a whacking great 13kWh battery in the boot of our plug-in hybrid model doesn’t make things easier.

The two-tier boot floor makes securing cargo tricky and when I went on holiday earlier this month, I only just managed to get two medium suitcases in. 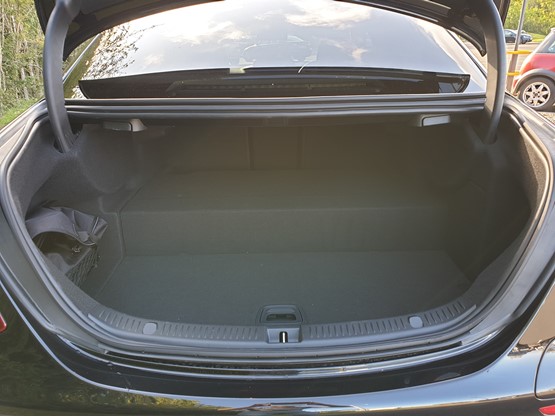 Luckily, there is an estate model for those that need a bit more load-lugging capability.

My other disappointment relates to the car’s standard equipment.

Given the car’s focus on long-distance fleet use – and £55k price tag – the lack of adaptive cruise control and lane-keeping assist is a bit of an oversight.

To get them you’ll have to add the £1,695 driver assistance pack. If you do, you won’t be disappointed. We’ve experienced the system in other models and it’s one of the best out there.

I’ve spent quite a lot of time praising the E-Class for its efficiency but it’s time to talk about performance.

The E 220d we tested last year was no slouch but, while the E 300de uses the same 194PS engine, it’s the electric motor’s boost that turns this unassuming eco-cruiser into a looney Q-car.

Confined within the nine-speed automatic transmission, the motor develops 120PS. It means the car can drive around on pure electricity in most situations you’ll encounter on the roads – with pretty adequate performance.

If you push the throttle a little harder – there’s a gauge that tells you how much of the motor you’re using – the engine fires into life. The transition is rather impressive, given that diesel motors usually get going with a little less finesse than their petrol counterparts.

Combined, the powertrain can deliver 700Nm of torque. To put that in context, a Lamborghini Huracan has 560Nm.

The upshot is a 0-60mph time of less than six seconds, although it’s the mid-range pace that really sets the car apart. The instant response of the electric motor, combined with the engine’s natural torque shove, slingshots the car forward as if it’s been hit with a sledgehammer.

Before you get too carried away though, the E 300de’s driveability – while impressive – is hampered by its 2-tonne kerb weight.

The weight can be felt in the corners, where the car’s soft suspension can sometimes struggle to keep things in check.

There’s no adaptive dampers or air suspension to handle the bulk, so using the full power reserves is best kept for straighter roads.

The three-day heatwave we experienced at the end of July – or ‘summer’ as it’s more likely to be remembered – gave me a chance to realise there are more benefits to the E300 de than just the cost savings.

Being a plug-in hybrid, the car’s heating and air conditioning system works independently of the engine – so it can operate when the car is driving on electric, or more interestingly, when parked.

The car is also ‘connected’, so by using the Mercedes Me app on my phone I can remotely activate the climate control within seconds.

It can heat and defrost the car in winter (or for most of the year), or chill it to a comfortable 18-degrees in the heights of summer.

You can also activate the system from inside the car, either via a timer or if you are stopping at the shops but want to keep the cool air pumping out.

It does seem to sap a fair amount of range from the battery, so I’ve found it’s best used when the car is plugged in. That said, sometimes the benefit outweighs the loss.

The Mercedes Me app also enables me to unlock and lock the car, see the remaining diesel and battery levels, check the service status and see where the car is located on a map.

When plugging in to charge, the app can send push notifications to my phone so I know the car is charging and it tells me when it has finished so I can go and unplug it and free up the charging space for another user.

Other services enables via the connected element of the infotainment system allow for internet radio streaming and weather forecasts, plus live traffic and fuel prices that appear on the sat-nav map.

Having enjoyed the benefits of the system though the summer, I’m looking forward to the heating element when the colder weather draws in.

The removal of the plug-in grant for hybrids means we don’t get a £2,500 discount on our £52,000 E 300de, but its projected cost savings should do enough to make it a worthwhile fleet choice.

This year, the car attracts a 16% BIK rate, but that drops to 12% next year for the next three years. There is also no diesel supplement to pay, as the de is classed as an alternative fuel vehicle.

Based on our current achievement of 70mpg (over the past 2,200 miles), we’ve estimated that fuel should cost £3,300 during the same four-year period – or about £85 per month - assuming the driver does 10,000 private miles per year. 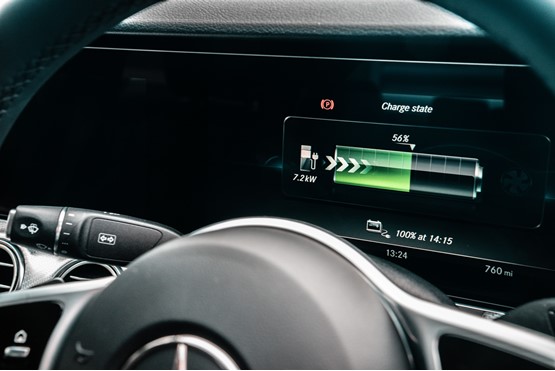 For a business, we’ve calculated operating costs of about £8,500 a year. That’s assuming the driver does about 10,000 business miles per year.

While leasing costs are about £100 per month more than an E 220d, the de is more than £5,500 cheaper comparatively over a four-year cycle and is eligible for 100% writing down allowance.

Its environmental credentials means there is no first-year VED to pay either, although because the E 300de’s list price exceeds £40,000 it attracts the higher rate of £455 per year thereafter (discounted from £465).

The benefits of the new powertrain are clear. Even without a charge, we’ve rarely seen the car return less than 46mpg on a single journey.

By hanging on to some charge, the car is always able to operate as a hybrid. It’s powertrain intelligently recuperates and recharges where necessary to prolong the zero-emission running for as long as possible.

My mileage profile leaves me with a bit of a conundrum. I only live about five miles from the Fleet News office, but regularly do long business trips of more than 200 miles.

Choosing the right fuel type is perplexing. My last car was a diesel, so ideal for the longer trips. Prior to that I spent some time in a petrol plug-in hybrid, which could easily cover my commute on electric but offered disappointing fuel economy the rest of the time.

A fully electric car doesn’t carry much appeal, yet, as I regularly leave the car at airports where it is notoriously hard to charge and don’t quite fancy a late-night stop at the M1 services. 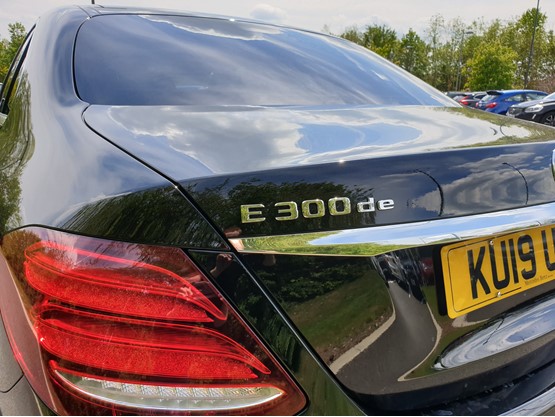 Mercedes might just have the answer with its new plug-in hybrid diesel. The engine debuted in the E-Class, badged E 300 de and is now available to order in the C-Class.

Our car is the sportier-looking AMG Line and is fitted with the optional Premium pack, bringing the total cost to £52,535.

Mercedes quotes a WLTP fuel economy figure of 176-201 mpg. So far I’ve covered 700 miles in the car and haven’t even burned through the first tank of diesel, averaging 75mpg. While this is somewhat short of the official figure, it is still better than the 43-51mpg that is quoted for a standard E 220 d.

Over the coming months I plan to find out how the E 300 de performs in a series of best and worst case scenarios. But, based on my initial impressions, I suspect this might be the solution that a lot of company car drivers are looking for.