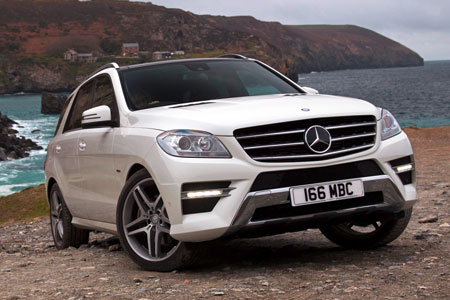 How far can you go with downsizing? In the large SUV sector the market seems to prefer the efficiency of six-cylinder diesel models.

But for now, the CO2 emissions of these models tend to be around the 180-200g/km mark. It seems an ideal moment for someone to enter the market with a smaller engine, but how small is ‘too small’?

The third-generation Mercedes-Benz M-Class has the six-cylinder diesel engine and high-performance petrol engine you’d expect, but when it launched in April the entry-level model came with a four-cylinder engine.

This ML250 CDI has a 2.1-litre diesel engine (2,143cc) and uses twin-turbo technology to produce 204bhp. This might sound like a step too far for downsizing, especially compared with the 245bhp offered by the BMW X5 3.0-litre diesel, and the 255bhp produced by the diesel Range Rover Sport.

But it’s worth comparing with the ML’s predecessors: when launched in 1999, the ML270 CDI came with a 163bhp five-cylinder engine, while the second-generation M-Class launched with a 225bhp ML320 CDI, the range evolved to include a 190bhp ML 280 CDI.

The pay-off for downsizing is in the CO2 emissions, which have dropped by almost 100g/km since the ML280 CDI of 2005, to 165g/km for the new ML250 CDI (although a rumoured 159g/km level talked about when the car was unveiled seems to have fallen victim to UK specification changes).

The M-Class has the subtle upmarket feel of most current Mercedes-Benz models (and a giant step forward from the American feel of the original M-Class cars from 13 years ago).

Every M-Class has an on and off-road capability, and all versions are fitted with 4Matic all-wheel drive, featuring 45/55 torque split between the front and rear axles which can be altered to suit road conditions.

The option for more extreme off-roading, providing six different drive modes, is available for an extra £1,985.

Performance feels adequate, with decent mid-range acceleration, although the engine note is rather less enjoyable than it would be with a six-cylinder motor under the bonnet. It also resists body roll very well when cornering.

Downsizing in this case seems to work and the ML 250 deserves to be taken seriously. Perhaps when drivers see they could make a £1,000-a-year BIK tax saving compared with six-cylinder rivals, they’ll do just that.