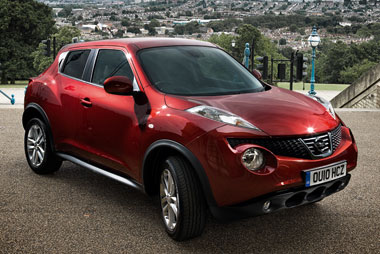 Nissan has recently been successful in creating cars that are different from the norm yet still strike a chord with buyers.

The Qashqai, introduced in 2007, brought some of the appeal of a 4x4 with the lofty driving position, but the compact dimensions and the running costs of a mainstream family car.

Nissan is hoping to repeat the Qashqai’s success in the small car sector with the new Juke.

With bolder styling than the Qashqai and an edgier attitude, the Juke certainly stands out on the road.

Like the Qashqai, the Juke provides the higher seating position of a 4x4, but takes up the same amount of space on the road as a small car, while the top portion of its body owes more to the 370Z than the X-Trail.

The Juke is available with a choice of either a normally aspirated 1.6-litre petrol engine, a 190bhp turbocharged 1.6-litre (with an all-wheel drive option) or a 110bhp 1.5-litre dCi diesel tested here.

The 1.5 dCi Acenta tested here had a decent level of performance, with 177lb-ft of torque available, so in combination with its slick-shifting six-speed manual gearbox feels lively enough on the road.

CO2 emissions of 134g/km for that model puts it into the 18% BIK tax bracket for the remainder of the current financial year, although it is a little disappointing that the emissions are only 3g/km lower than the same engine used in the larger Qashqai.

Despite its relatively lofty appearance, the Juke feels nimble on the road, and is comfortable finding the gaps that appear in urban traffic.

The sixth gear also makes it feel relaxed on the motorway, while 50mpg-plus from the diesel Juke should be easily obtainable.

Nissan expects annual Juke sales to exceed those of its other new small car, the Micra, which perhaps illustrates the desire of many drivers to choose a car that reflects their own personalities more.

Its attention-grabbing styling combined with manageable running costs and pleasant road manners suggest the Juke will have every chance of following the larger Qashqai along the road to success.

The mid-spec diesel Juke is priced at about £15,000, making the Mini Countryman seem expensive in entry-level diesel guise. We threw in the DS3 as a compact stylish alternative.

The Juke won’t be for everyone, but each of the four cars in this comparison offer stylish alternatives to conventional small cars that appeal to user-choosers. The Juke has a clear edge over rivals on costs, and is also great fun to drive. Nissan’s recent knack of producing cars people want to drive continues.