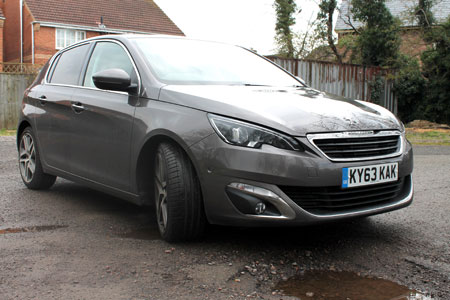 When your new long-term test car has just been named European Car of the Year, it gives you a sense of confidence that the next few months will be a pleasure rather than a pain.

Our new Peugeot 308 was chosen as a winner by a jury of 58 journalists from 22 European countries and its win was all the more impressive considering the line-up of shortlisted rivals, which were the BMW i3, Citroën C4 Picasso, Mazda 3, Mercedes-Benz S-Class, Skoda Octavia and Tesla Model S.

It isn’t the only recent award winner in the family either, as the Peugeot 208 also took the Best Small Car accolade at the recent fleet industry ‘Oscars’, the Fleet News Awards2014.

This will be music to the ears of Peugeot executives, who have been working for years to transform the product line-up and move it more upmarket.

There is a general hint of Audi A3 about the exterior, particularly at the rear flanks and the interior has a real quality feel to it, especially with the addition of £1,500 black nappa leather seats.

Peak torque of 199lb-ft comes in at a rather high 1,750rpm, which can require a bit of stick shifting on the solid six-speed box to avoid the engine bedding down for the night, but generally it offers a solid band of power to easily keep up with traffic, while cruising is effortless and efficient.

The next few thousand miles should be a very pleasant experience, as the Peugeot design boffins have introduced some really nice touches.

For example, you look over the steering wheel at the instruments, rather than through it. Once you have tried it, it makes complete sense, although I have heard from other testers that it’s not ideal for every driver.