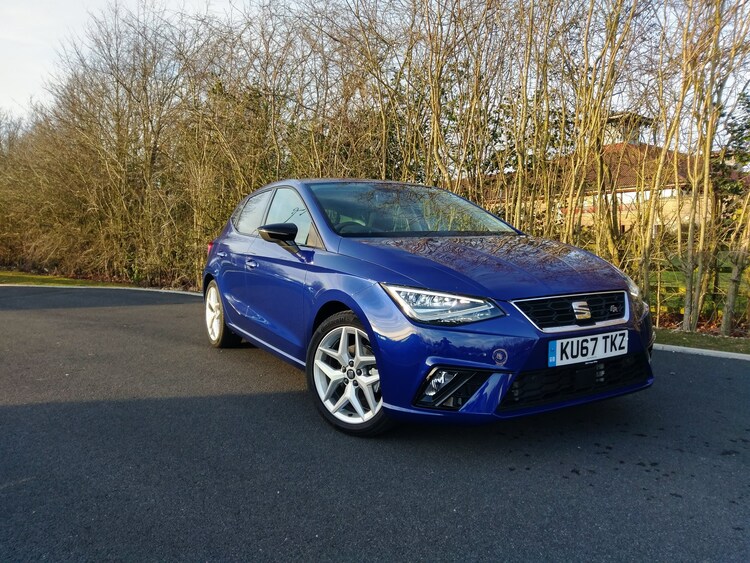 Sarah Tooze gives praise all round for the fifth generation Ibiza.

It’s been a while since we’ve tested a car that has had the thumbs up from every member of the editorial team that has driven it, but the Ibiza has done just that.

When our head of production Luke Neal handed me the keys to see out its final two weeks with us before it went back to Seat he’d been impressed by its looks and its turbocharged 1.0-litre petrol engine, which can do 0-62mph in 9.5 seconds yet still return 50-plus mpg on long journeys.

The downside for him was that for a family of four it didn’t have the luggage capacity he would need for a holiday.

However, the Ibiza has one of the biggest boots in its class with the rear seats up at 355 litres (compared to the Ford Fiesta’s 292 litres and Nissan Micra’s 300 litres).

With the seats folded the Micra and Fiesta offer more space (1,004 litres and 1,093 litres respectively, compared to the Ibiza’s 823 litres).

The Ibiza shares the same Volkswagen Group MQB A0 platform as the Polo meaning it has a much longer wheelbase than the fourth generation Ibiza and passengers enjoy more room.

At six foot four inches, the tallest member of our team, head of digital Jeremy Bennett, found the Ibiza had ample space.

On the road the Ibiza’s sevenspeed DSG gearbox is effortless and while the FR offers a sportier ride than other versions it’s still comfortable.

The 1.0-litre engine feels much more suited to the Ibiza than in our previous long-term Škoda Octavia.

When we first took delivery of the Ibiza its fuel economy was a disappointing 40.1mpg, based on urban trips, but by the end of its six-month stint it was averaging a more respectable 47mpg (13mpg below the official combined figure).

It will be interesting to see how our new Ford Fiesta long-termer, which marginally beat the Ibiza in this year’s Fleet News Awards, fares (the Ibiza and Micra were both highly commended).

Seat's Ibiza FR baffles Luke Neal and family with its inclusion of retro window winders amid a host of hi-tech driver aids.

Daughter: “What’s this handle for?”

Daughter: “The one on the door.”

Me: “That’s for opening the window.”

Me: “You wind it round and it opens the window.”

Daughter: “That’s so weird! Why hasn’t it got a button?”

The conversation made me smile and prompted me to consider just how far technology has come in such a seemingly short space of time – not just in cars.

It doesn’t seem too long ago that we weren’t permanently connected to the internet anywhere and anytime.

If you wanted to contact someone you had to speak or write to them, something that I’m sure she would find equally bizarre.

As far as windy windows go though, she has a point. I haven’t seen them in a modern car for years.

Maybe I’m spoilt... but as cars are becoming more and more packed with technology and electronics to make our journeys safer, easier and more comfortable, the lack of rear electric windows in the Ibiza seems a strange omission, especially when you consider the range of driver aids the car has to offer.

But for rear seat passengers it’s just a case of retro motoring!

When Fleet News was given an early look at the fifth generation Ibiza in June, Seat was clear in its intention to be a match in the B-segment for new market heavyweights, the Nissan Micra, Ford Fiesta, Volkswagen Polo and Kia Rio.

There are signs things are going the Ibiza’s way.

Two months in and the Society of Motor Manufacturer and Traders (SMMT) figures reveal the Ibiza’s segment share is up year-to-date from 4.7% to 5.1%, sitting at seventh above the Micra (12th) and Rio (15th).

Ibiza is well on the way to achieving the brand’s aspiration to be one of the best cars in its class.

But how does it compare to competitors when considering key issues such as CO2 emissions, VED rate, mpg and monthly tax liability?

I used KeeResources’ Kwikview platform to crunch the data, choosing to look in depth at the Fiesta 1.0T EcoBoost Zetec Auto and Polo 1.0TSI 115 DSG.

Where the Ibiza wins: the monthly liability for a basic rate taxpayer is currently £3 lower than the Fiesta and £5 less than the Polo; its combined mpg rate is 60.1, compared to the Fiesta’s 54.3mpg and Polo’s 58.9mpg.

So, while in a narrow competitor field, the Ibiza stands tall when judged by these fundamental measures.

Seat’s fifth-generation Ibiza is the latest car to join our fleet and, finished in Mystery Blue, it is sure to turn some heads.

Having already attracted a string of office admirers, I doubt the keys will remain in my possession for long!

It was the first small car to be based on Volkswagen’s new MQB A0 platform, which now underpins the new Polo.

The result sees the Ibiza gain 35mm of passenger legroom and benefit from a 65-litre increase in boot space (355 litres) over the old model.

We chose the 1.0-litre TSI with 115PS as we wanted to sample the seven-speed DSG gearbox. It is only available in the sporty FR trim with this engine, and is priced £17,710.

With a benefit-in-kind (BIK) tax band of 20%, drivers can indulge in a sportier model without the sting of high company car tax. BIK will cost around £58 per month. The less powerful, similarly priced, Ibiza Xcellence manual costs £1 less.

The FR’s standard equipment and greater performance should make the extra £1 seem worthwhile as it has sat-nav, 17-inch alloy wheels, a twin exhaust, digital radio and Seat Drive Profile, which lets you choose between eco, sport, comfort and individual drive modes.

All models come with autonomous emergency braking as standard, and the Ibiza has received the maximum five-star Euro NCAP safety rating.

We added Vision Pack Plus (£425) which includes front and rear parking sensors with a rear view camera.

This feature has come in handy when trying to reverse park into our office’s notoriously compact parking spaces.

The camera uses the eight-inch infotainment display to line you up perfectly, which should reduce the likelihood of any parking scrapes or ‘surprise’ bollards.