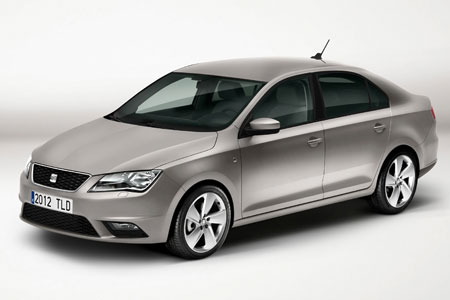 Seat is delving into its past when its most successful recipe for no-frills motoring returns to the showrooms this winter.

Two decades after making an impact with a big-booted saloon-style hatchback based on the platform of the Golf, Volkswagen’s Spanish division is reviving the formula with an attractive family model offering even more space for occupants and their luggage.

Sharing its underpinnings with the latest Volkswagen Polo and built in the Czech Republic alongside the Skoda Rapid, the fourth-generation Toledo will be pitched as an ideal compromise for business and family motorists who want high-value transport.

Just as with the original car, saloon styling neatly masks a rear hatchback door that swings up to reveal a huge boot with a 550-litre capacity. And the volume potential can be stretched to an estate-car like 1,490 litres when the split-fold rear seat backrests are laid flat.

“After we became part of Volkswagen, the original Toledo represented a turning point for our company by combining exceptional space with excellent value for money,” product manager Pedro Elorduy told Fleet News.

“It was the most successful of the series, so we have returned to our roots to give our latest car unrivalled functionality and a bigger interior than all its main competitors.

“We also believe that the range boasts 10% lower emissions than rivals on average. We feel this is the right product at the right time.”

Positioned between the Ibiza supermini and Leon lower-medium car (although it is longer than the current Leon), the Toledo is expected to carry a bargain-basement entry price of £12,500 when it goes on sale at the end of the year with a 75bhp, three-cylinder, 1.2-litre petrol engine under its bonnet.

Three other 1.2-litre and 1.4-litre TSI petrol units developing up to 122bhp will also be on offer, but Seat UK officials are confident that more than half the examples it hopes to register in 2013 will be driven by the Volkswagen Group’s ubiquitous 1.6-litre, 105bhp diesel motor.

Even though the diesel is mated with five-speed transmission only, the lusty motor is capable of more than 70mpg economy thanks to the inclusion of stop-start and energy recovery technology. In this form, the car provides the refined, easy-going demeanour that promises relaxing travel over long distances.

A dramatic departure from the third-generation Toledo, which featured a controversial ‘bustle’ style at the rear and was the least successful model of the series before being withdrawn in 2009, the new car uses a longer wheelbase to promote added legroom in bodywork so roomy that it’s hard to believe it is based on the platform of a supermini, even allowing for the fact that today’s Polo is as big as the original Golf.

As a result, accommodation is generous throughout and the remarkable amount of legroom for rear seat occupants will appease the tallest of adults.

Significantly, the car claimed to boast D-segment space at supermini prices makes use of good grade trim materials and has a dashboard that is neatly laid out.

Though it may lack the wow factor for some observers, the Toledo has the understated appearance of a quality product and one of its strongest attributes is that this is reinforced by the solid performance and feel that is typical of Volkswagen.

Unfortunately, the downside for the company is that putting a Seat badge on what is basically a Skoda design will inevitably add to the problem of marketing the car as a product with distinctive Spanish flair – although, in fairness, the Toledo does differ from the Rapid in front and rear styling.

Seat says that providing higher capacity engines is a ‘theoretical possibility’, but believes that maintaining the car’s cost-effective status in the range and avoiding a clash with the next version of the Leon – to be revealed at the Paris Motor Show – means the Toledo is unlikely to be offered with 2.0-litre power.

But a 90bhp version of the diesel motor will widen the range next year to further increase the fleet appeal of a model that offers high practicality at value pricing.

Bearing that in mind, it comes as a surprise to discover that company officials reckon the new Leon should be five times more popular in the showrooms.

That equates to just 2,000 Toledo registrations in the UK – low expectations indeed for a car that may well be seen as a good proposition for fleets looking for ways to improve operating overheads.