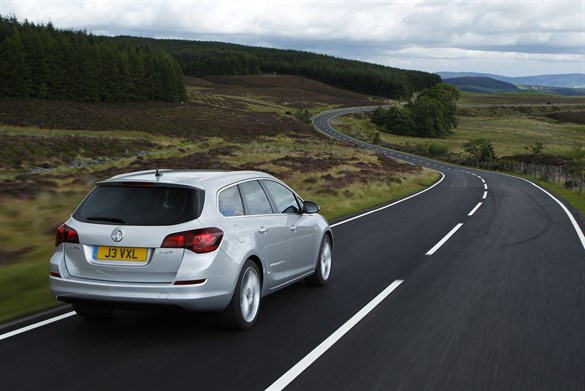 One of the sleekest compact load-carriers on the market is proving to be something of a Jekyll and Hyde on our test fleet.

Delivered to us direct from the production line at Ellesmere Port, the Astra SRi ecoFLEX Sport Tourer boasts svelte styling and significant advances in quality and refinement compared with previous Vauxhall estates.

But the kerbside impression made by the glamorous workhorse is taking a dent as a result of continuing disappointment over fuel economy. Even though it has the double advantages of a relatively powerful 1.7-litre turbodiesel engine and six-speed transmission, it managed an average of only 46mpg during its first 3,000 miles in our hands.

With the speedometer now showing more than double that distance, the car has topped 50mpg on four occasions - a marked improvement – but an overall average of 48.7mpg still falls short of the combined 62.8mpg return claimed by the company by a considerable margin.

Significantly, performance has improved as the mileage has increased and the lusty, 125bhp motor is running quieter and more smoothly as it loosens up, giving the Astra a demeanour to fully match the appeal generated by a lithe and handsome appearance.

Despite its shapely lines, the Sport Tourer remains practical transport with a relatively huge load volume and intelligent engineering means converting the rear seat into a generous load area couldn’t be easier – just pulling tiny levers in the walls near the tailgate opening drops the backrests in an instant.

With sill covers, illuminated vanity mirrors, dark-tint rear windows and ambient lighting around the centre console, there’s a distinctly upmarket feel about this model in SRi trim. Surprisingly, the packaging doesn’t include auto lights or wipers but does feature a handy electric parking brake among a long list of standard-fit equipment that includes fog lights, cruise control, a multi-function trip computer and steering wheel controls for the in-car entertainment system.

Thanks to stiffer settings and its lower stance, the SRi is agile and handles well, feeling secure and instilling confidence as it sweeps along major routes in an overdrive top ratio that sees the rev counter needle remain under the 2,000rpm-mark for much of the time. Which makes our economy return all the more of a mystery...