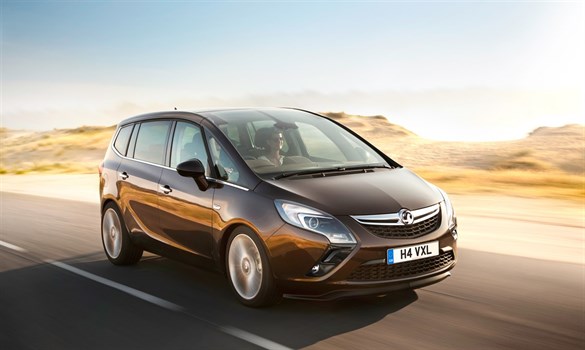 The Zafira has been one of Vauxhall’s most successful models to date. The original in 1999 demonstrated you could not only carry up to seven people in a car the same size as a family hatchback, you didn’t have to lug heavy seats out of the car to create space for luggage.

The second-generation model in 2005 improved on the formula with better quality, more powerful and efficient engines, and more responsive handling.

The Zafira Tourer – the third-generation model – will actually sell alongside the second-generation model. But with prices now starting at £21,000 for the Tourer, it’s easy to see why Vauxhall wants to have a presence in the sub-£20,000 seven-seater market.

The Tourer marches upmarket with plush materials inside, along with a range of sophisticated features. All versions have extra equipment as standard over the outgoing versions of the Zafira and they come with a new engine line-up.

The Zafira Tourer will be offered with three versions of a 2.0-litre diesel engine also found in the Astra and Insignia. The entry level version produces 110bhp, while a low CO2 Ecoflex develops 130bhp. However, the range-topping 165bhp variants were the only ones available for us to test.

As well as being more powerful than previous diesel versions of the Zafira, Vauxhall has also worked to ensure the car has the level of refinement befitting its new upmarket price tag. Noise from the diesel engine is muted – perhaps the quietest to date for this application of the engine also used by Fiat, Alfa Romeo and Saab – and there is little intrusion from other sound at modest speeds.

It’s a fine drive too, with responsive steering and predictable handling. Apart from the excellent visibility from the high driving position, you’d be hard pressed to tell you were behind the wheel of a seven-seater.

The Zafira Tourer has also been designed with slim twin A-pillars, much like the Renault Espace, which improves visibility significantly over most other modern cars.

The second row seats are more flexible than before, with a 40:20:40 split with the centre seat able to double as an armrest on some versions while the outer seats can be slid back to offer limousine-like leg-room.

Medium-spec versions and higher come with a ‘FlexRail’, similar to that in the Vauxhall Meriva, which can slide fore and aft between the front seats, as well as conceal one of 30 storage compartments.

The Zafira has always been one of the cleverest people carriers around, and the Zafira Tourer is no exception.