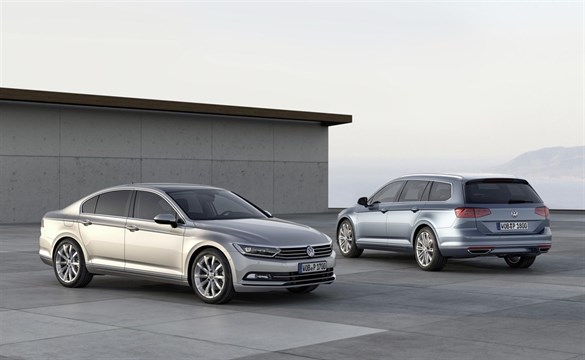 The Ford Mondeo (reviewed here) goes on sale in December while the new Volkswagen Passat will be launched in January (although it is ready to order now).

Volkswagen, as a mid-premium marque, has the twin challenge of fending off moves by the likes of Ford into its territory while taking the fight to the full premium manufacturers like BMW and Mercedes-Benz (and, hush-hush, stable-mate Audi). The company believes the new Passat does just that.

On emissions, the Passat matches the Ford Mondeo, but falls short of the sector-leading Vauxhall Insignia.

A Bluemotion version is promised by mid-year (provisional 95g/km and 78mpg), although Volkswagen expects that to account for just 3-5% of total sales. It will also launch a GTE plug-in petrol-hybrid at the same time, with sub-45g/km CO2.

The Passat is not quite a sector leader in emissions then, but it’s close enough on benefit-in-kind not to deter user-choosers.

Looks-wise, this eighth-generation car is unmistakably a Passat; Volkswagen is the master of evolution not revolution.

However, there are significant differences in design and improvements in quality and technology, such as a new-look grille that blends into the headlights and side ‘character’ creases that travel the length of the car bisecting the door handles to seep into the rear lights.

It looks dynamic, a description rarely given to the often-staid previous Passat incarnations.

Interior quality levels are high with tactile materials and soft-touch switches that sit flush to the surface. And the cabin is well insulated with barely any road or wind noise when travelling at motorway speeds.

Neat touches include rear LED lights that glow with a horizontal red bar until the brakes are pressed, when the bar becomes three vertical lines. Volkswagen believes this striking visibility will reduce rear end collisions.

The new Passat is also lighter – by up to 85kg – and despite being 2mm shorter (4mm for the estate) its wheelbase has increased by 79mm thanks to a shorter front overhang, which means more space for front and rear occupants.

The key engine for fleets will be the frugal 2.0-litre 150hp diesel with its 69mpg combined fuel efficiency. It is likely to account for 70% of sales on the saloon and 75% on the estate, with the 1.6-litre 110hp TDI accounting for the balance (the higher powered 190hp diesel will also take some estate sales). All engines meet Euro6 regulations.

Mated to a six-speed manual or six-speed DSG auto, the refined 2.0-litre is eager and willing at high revs with excellent pick-up at low revs. It combines power and efficiency.

Handling is sure and precise with the car coping confidently with corners. The ride is smooth over most road surfaces but a little jarring on the worst potholes.

The SE Business trim will be most popular for user-choosers while SMEs are more likely to opt for the higher equipped GT. Residuals are expected to be higher on the GT due to greater anticipated demand for both new and used models, but Volkswagen hopes for a five percentage point rise like-for-like across the range.

Minimising total cost of ownership for fleets has been a priority. Pricing guides were will be most involved at an early stage with Volkswagen acting on their advice. A key change was to simplify the model range with fewer derivatives.

The two petrol models, which sold poorly, have been dropped in the UK and less popular trim specifications have also been shelved. It results in a more cohesive line-up with clear step-changes throughout the range, enhanced by obvious exterior style treatments tailored to key derivatives.

Improvements in residual values and anticipated savings in insurance costs – SE trim and above with city emergency braking could see a two-group insurance rating drop similar to the Golf – will offset the higher P11D price, typically £1,000.

“There is a jump, but the new Passat has a host of new technology and a 15ps power uplift. It has lower emissions, touch screen infotainment, post-collision braking and driver alert as standard,” said Passat product manager Sally-Anne Norris.

“We have also added lumbar support on S trim and above because we had lots of feedback from job-need drivers that they wanted it, so we hope it will win us more customers.”

The company is looking for a “slight uplift” in sales, according to Norris, with greater interest from company car drivers who might previously have opted for a premium marque.