"It’s worth pointing out that, even when the electric charge is officially depleted, the battery holds some in reserve. " 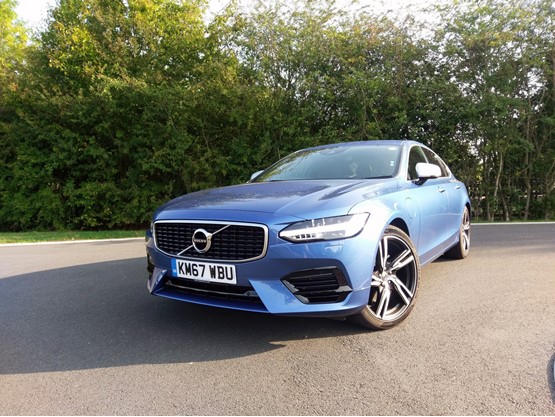 There has been no shortage of positive sentiments about the Volvo S90 published in Fleet News since the car’s launch, so rather than go over old ground about how brilliant it is, let’s focus on the real ‘party-piece’ of this range-topping T8 version.

The powertrain makes use of a 2.0-litre four-cylinder petrol engine with a turbocharger and a supercharger, producing 320PS.

Then, Volvo adds an electric motor to the rear axle that boosts power to 390PS and provides all-wheel drive. The result is simply astonishing.

Acceleration from standstill to 60mph takes less than five seconds, and the in-gear pace is ferocious enough to require significant restraint on public roads.

It’s worth noting that the S90 is not the most ‘dynamic’ car in the segment. You won’t have any more fun on B roads in the T8 than in a normal diesel version.

Our car is fitted with the optional Four-C active chassis (£1,500), which adds adaptive dampers and air suspension at the rear.

Ride quality is excellent and when combined with the silent and smooth electric running, the S90 T8 is relaxing and refined.

Fire up the raucous petrol engine and things become a bit tainted. The transition from electric to petrol is almost instantaneous but not unnoticeable. Throttle response becomes very sensitive and it all feels a bit GTI instead of VIP.

If you make full use of the engine’s capabilities then it is possible to see readings of 10mpg.

During more than 2,000 miles of driving, we averaged 42mpg. Now, consider what else you can buy for £60,000 that is this quick and those figures become a lot more impressive – despite being some 80mpg short of what Volvo claims.

Finished in Bursting blue, and in R Design Pro trim, this S90 has been one of my true highlights of the year.

With Volvo due to collect the car later this week, all I can say is good luck prising the keys away from me.

To get the best out of the plug-in hybrid S90, you need to operate within quite a narrow travel band. Namely, a daily commute of less than 30 miles.

Mine is 34 miles – does that tiny bit extra really make a difference? When it comes to fuel efficiency, absolutely.

With only the option of charging at work, our S90’s 25-mile electric-only range (28 miles if you select ‘pure’ drive mode) falls just short.

And those few miles powered by the 2.0-litre petrol engine have a considerable effect on consumption.

Resetting the trip computer and using electric power returns a ‘fuel’ figure of 214mpg. Combine the 25 or 28 electric miles with around 10 petrol miles (from personal mileage and the return journey to work) and that immediately drops to mid-70s.

Not bad, but add in a few 200-mile journeys for business and suddenly you are averaging 45mpg (our current performance after some 1,200 miles with the car).

In comparison, the 2.0-litre diesel model we previously had on test averaged 42mpg on commute, but mid-50s when a few longer journeys were thrown in. Little difference, then.

It’s worth pointing out that, even when the electric charge is officially depleted, the battery holds some in reserve, allowing you to pull away and build speed with a feather right foot to close to 30mph before the petrol engine kicks in.

It obviously helps to save fuel, but the overall result is a little disappointing; it definitely does not offset the huge £20,000 price premium over the £37,000 diesel S90.

Of course, the T8 tops the model range, showcasing the latest technology but also providing the most power (320PS versus 190PS for the diesel, more on this in the next test) and driving enjoyment of any S90.

And, sticking to the commute figures, 70mpg is pretty good – though disappointingly short of the official 128mpg (NEDC-correlated).

Lots of positive then, particularly if you are a low daily mileage driver looking for a car that combines power and fuel efficiency.

But, if minimising fuel consumption over a mix of short and occasionally longer journeys is your goal, this particular plug-in hybrid is probably not the answer.

In an early test of our departed Volvo S90 2.0-litre diesel D4, I lamented the fact that the big executive car was gnawing away at my wallet on my daily commute, with fuel efficiency languishing at 38mpg. Perhaps I’d be better off with the hybrid, I pondered.

Well, here we are with the Volvo S90 T8 plug-in hybrid which offers an electric range of 25 miles (28 if you select the eco Pure function) and promises a correlated NEDC of 128.4mpg.

Interestingly, while the official CO2 emissions have only increased by 3g/km over the 46g/km NEDC figure, the fuel efficiency has dropped from 141mpg.

These figures need to be put in context. They depend on your ability (and desire) to charge the car whenever the electric range runs out because the 2.0-litre petrol engine that then takes over will ruin the consumption performance.

Running alone, the petrol unit is capable of 42mpg; we suspect the real-world figure is a little lower than this. Unfortunately there is no Emissions Analysis data on either the petrol or hybrid S90 so we’ll have to conduct our own tests.

We’ll look at efficiency in detail in the next review. Suffice to say for now, the trip computer registered 214mpg when we first took delivery, travelling purely on electric, but dropped below 100mpg within a few miles of the switch to petrol.

They include the £600 Intellisafe Surround (auto-dimming mirrors and blind spot assist with cross traffic alert and rear collision mitigation), a non-fleet-friendly £1,050 for a soft leather seat pack, plus handy single options such as rear park assist camera (£400) and front park assist (£325).

Volvo XC60 long-term test | how does it stack up against rivals?

We run the numbers to see how the XC60 performs against the BMW X3, Land Rover Discovery Sport, Kia Sportage and VW Tiguan.