"Fuel economy continues to hover around the 43mpg mark, which is now closer to the official figure under the new WLTP test." 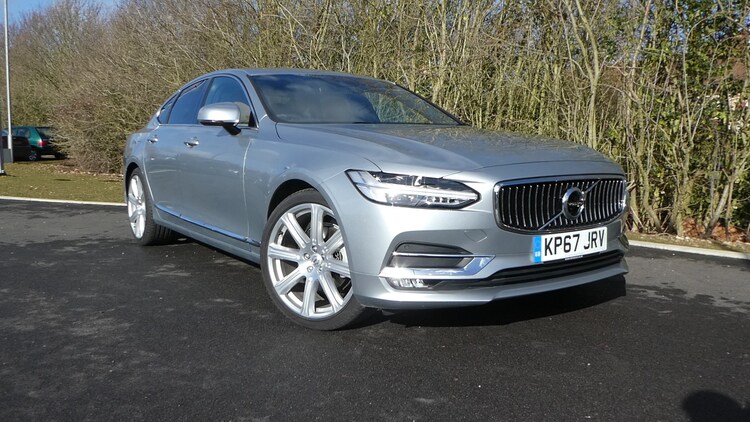 I may have done Volvo a disservice.

In a previous review, I commented on the S90’s 55-litre fuel tank and the maximum range of 470 miles after fill up.

Having now done some sums, that equates to 39mpg. At the time, the car was averaging 43mpg.

First, calculate the actual fuel used rather than rely on the trip computer. Second, use the car in its most natural environment, higher speed journeys on main A-roads and motorways, to gauge peak performance.

The former resulted in a discrepancy of around 2mpg, with the car returning 45.7mpg against a claimed figure of 47.6mpg.

On a 322-mile family journey to Glasgow, the S90 took on a whole new character when it came to fuel efficiency. Immediately after fill-up, it registered the usual range of 470 miles. After travelling around 40 miles, range had extended to 650 miles.

It peaked at 710 miles after 76 miles, giving a hypothetical range of 787 miles, which would equate to 65mpg.

At the time, the car was showing 55.1mpg, although that rose later in the journey to 57.2mpg – a new personal record and just 4.2mpg off the correlated NEDC figure. Though we didn’t hit the theoretical range, we did cover around 680 miles.

The round trip, which came shortly before the S90 returned to Volvo, also gave a perfect opportunity to assess the car’s family appeal.

The S90 gets top marks for comfort and practicality. Two adults and two (almost) full-size children have ample space in relaxing seats, the boot has room to spare and privacy glass offers protection from the sun’s glare during the heatwave.

Meanwhile, front-seat occupants have the choice of seat heaters or cooling fans (currently the latter), dependent on weather conditions.

The ride prioritises comfort over sportiness, while the S90 is easy to drive, despite its size. Handling is firm at high speed but light for low-speed manoeuvring.

When you get comments from the back seat such as “that journey went quick” or “are we here already?”, you know the car is doing its job!

The Volvo S90 and I had cause for celebration this week. The pockmarked road leading out of town has finally been resurfaced.

It accounted for one casualty; a new tyre had to be fitted after one particularly severe pothole caused a rip in the sidewall.

The alloy also suffered some scuffing, but such is the regularity with which we’ve been encountering these holes, we’ve yet to get it skimmed.

The tyre pressure monitoring system has also been called into action due to an underinflated rear tyre. We’ve pumped it up and reset the system; so far so good.

We’re slowly clocking up the miles in the S90 and it’s been effortless. The seats offer excellent lumbar support and have inflatable side bolsters to hold you snugly in place. 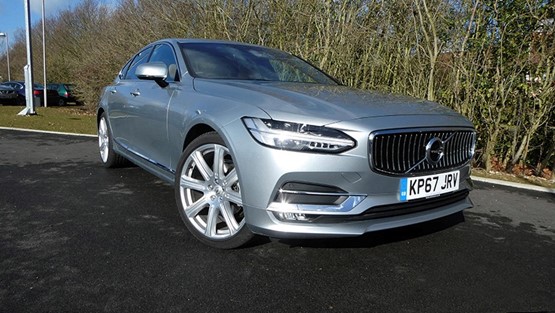 The seat base can also be extended for additional leg support, ensuring that any size and length of driver will be able to find their sweet spot.

Space for five is excellent, thanks in part – as mentioned in a previous test – to the brilliant in-built child bolster seat, which takes up much less room and is less self-conscious for the child involved. Leg, elbow, shoulder and headspace for adults is class leading.

Fuel economy continues to hover around the 43mpg mark, which is now closer to the official figure under the new WLTP test.

Others have fared far worse under WLTP.

Equa Index reports real world figures of 46.6mpg, but we can easily beat this on longer journeys with a mid-50s return.

However, every-day running does mean that, even when full, the S90 promises a range of just 470 miles due to its undersized 55-litre fuel tank.

So more visits to the fuel station than we’d like, but that doesn’t detract from the fact that the Volvo S90 is an outstanding family car.

Bing-bing-bing-bing – the sound of the S90’s City Safety front collision warning is becoming a weekly occurrence, as the big Volvo mistakes yet another parked car as an impending crash.

Volvo’s safety technology is among the best in the industry, so if it still gets easily confused on narrow roads, it suggests we remain some way off from a foolproof system.

Each time the alert is activated, it is accompanied by a brief dab of the brakes, before the system realises that I am still in control of the car and gives way.

I’ve not tested the run-off road protection system – which automatically tightens the front seatbelts should the car inadvertently leave the road – nor the collapsible seat frames which help prevent spinal injuries. And, I’ve no plans to.

But, I have tested the Pilot Assist with adaptive cruise control and, while a little unnerving, it works well.

It is best employed on the motorway, where control of the speed through acceleration and braking combines with steering inputs to keep the car within the lane markings.

You have to keep your hands on the wheel, which creates the odd sensation of the wheel moving your hands, but so far it has been faultless.

I’ve also tried it on A-roads with no issues, although the steering has a slight delay on bends. Hold your nerve and it does navigates safely, but it’s hard not to manually override. As mentioned, I’ve no desire to test run-off road protection!

Other safety/driver assistance systems also get the big tick, including the LED headlights with active high beam. 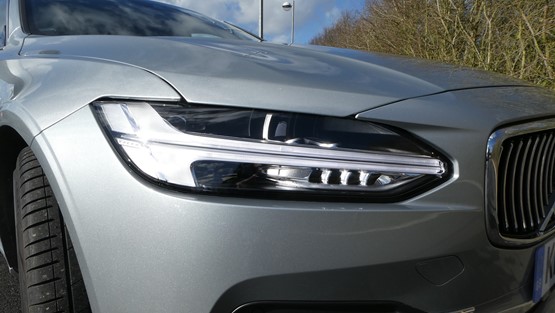 It is quick to react to prevent dazzling when sensing an approaching car; some systems are less diligent – some cars we’ve driven have switched to high beam when following another vehicle.

One final quibble – although by the time of the next test it should no longer be a problem due to the change in weather. Switching on the rear screen heater sometimes interferes with the radio signal.

It will be less of an issue with the brighter weather, but it does seem a bit of an oversight on the part of Volvo’s engineers.

Usually, I’m in the office three or four days a week, a 17-mile commute. Such brevity is killing my fuel consumption in the 2.0-litre 190PS D4 diesel.

Officially 64.2mpg, the S90 is averaging a distinctly poor 38mpg, even when eco mode has been selected (in comparison, our BMW 5 Series long-termer returned mid 40s on commute while our Jaguar XF nudged 50mpg).

The damage is done by the depreciation – 51ppm on the T8 compared to 33ppm on the D4.

However, should the T8 perform strongly in the used market (as Volvo has experienced with the XC90 T8), then residuals will rise and the running cost gap will close.

Longer journeys are where diesel pays its way, of course. A 108-mile trip back to Peterborough from Heathrow Airport saw the trip computer register 56.2mpg – far more palatable and notably higher than the Equa Index 46.6mpg ‘real-world driving’ figure.

A handful of similar longer journeys have managed to haul the average efficiency up to 43.8mpg.

Fuel matters aside, the Volvo S90 is an excellent choice for any fleet driver looking for space, comfort and safety.

The 500-litre boot is big, though surprisingly a few litres smaller than its main rivals, but the front and rear leg-, shoulder- and headroom is class-leading. And, for those with smaller children, rear space is aided by the excellent inbuilt booster seat.

The S90 is arguably the most attractive Volvo ever made, a view shared by many acquaintances including some long-time enthusiasts of the Swedish, Geely-owned brand.

Few cars have resulted in such interest from other drivers, each keen to take a closer look.

It wasn’t the most auspicious start for our new Volvo S90 long-termer. My 11-year-old daughter stepped into the car and immediately blurted out “it’s a bit old-fashioned”.

Probably not the reaction Volvo was seeking, but then a tan (officially amber) leather and walnut wood panelling combo is not the most contemporary styling. 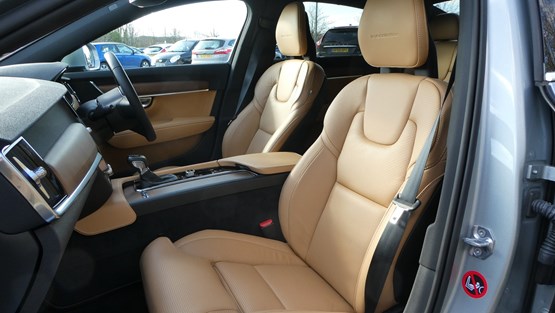 However, this trim spec is optional; many others are available, so let’s press re-set and start again.

Our test car is the D4 2.0-litre diesel with eight-speed automatic transmission generating 190PS and good for – on paper at least – 64.2mpg. In range-topping Inscription trim (other options are Momentum and the sporty R-Design), the S90 has a P11D price of £37,500.

The S90 is packed with standard equipment, lots of it safety-related as we’ve come to expect from Volvo.

It includes City Safety collision warning with autonomous emergency braking, capable of identifying pedestrians, cyclists and animals; run-off road protection, which tightens the front seatbelts should the car leave the road, while front seat frames have a collapsible section to help prevent spinal injuries; and Pilot Assist semi-autonomous drive, which assists with steering up to 80mph and controls accelerator and braking to keep the car within lane markings and at the desired cruising speed (as long as your hands remain on the wheel).

Early driving impressions are favourable, erring on the side of comfort over dynamism. There is ample power from the engine when required, although it is a little harsh when pressed with a little too much noise intrusion.