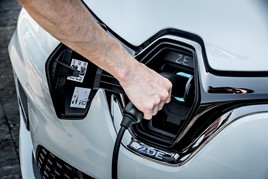 This feature originally appeared in the December 2020 edition of Fleet News. Read the digital issue of the magazine by clicking here

The reasons an organisation should adopt battery electric vehicles can be boiled down to the three Es: economic, environmental and ethical.

Operating battery electric vehicles (BEVs) has the potential to save organisations thousands of pounds per vehicle each year, regardless of whether they are leased or bought outright.

BEVs have traditionally carried a price and leasing premium over petrol or diesel vehicles and although this may not be for long – analysts KPMG predict price parity in 2021 as the technology develops and the cost of raw materials falls – fleet decision-makers are urged to instead consider wholelife costs.

“Even if you have to pay more up front or if your monthly rental is a little higher, the running cost through electricity is much cheaper than petrol or diesel, and there is a reduced service, maintenance and repair (SMR) cost from the fact there are fewer mechanical working parts,” says Helen Lees, head of Free2Move Mobility and connected services at Groupe PSA. “That can change the perception of pricing in the customers’ minds.”

The major cost advantage a BEV currently has over an internal combustion engine (ICE) vehicle is fuel. The cost of electricity to power a BEV for a mile depends on the electricity tariff used and the efficiency of the car, but starts at around 3.5p per mile (ppm) on the average domestic electricity rate of about 14p per kWh. This compares with 10ppm to 14ppm to fuel a typical diesel car.

HMRC has an advisory electricity rate for BEVs of 4ppm. This compares with AFRs of between 10ppm and 17ppm for petrol cars and 8ppm and 12ppm for diesel models.

“There are a total of 20 items used in petrol and diesel cars but not in EVs that require inspection, maintenance or replacement over a vehicle’s 10-year/150,000-mile life.”

As the Class 1A National Insurance Contributions (NICs) for company cars is calculated using the BIK rate, organisations will pay no Class 1A NIC on pure electric vehicles in 2020/21, increasing slightly in the following tax years.

In an example provided by EST (see table alongside), this would mean a fleet would save £2,494 in NIC over the three tax years if it operated a Nissan Leaf N-Connecta 40kWh instead of a petrol Ford Focus 1.0 125PS Zetec Nav from the April this year.

“In our experience, many fleets don’t consider NIC when comparing vehicles and the savings with the latest rules make it absolutely essential for calculations to include those savings,” says Ian Featherstone, account manager, supply chain, at EST.

In addition, BEVs are fully exempt from vehicle excise duty (VED), as earlier this year the Government announced all zero emission cars will not be incur the VED ‘expensive car supplement’ until 2025.

This means BEVs costing more than £40,000 no longer face the £320 premium, which had been the only VED zero emission cars had been subject to.

Currently, cars with CO2 emissions of less than 50g/km are eligible for 100% first year capital allowances, which means those organisations which outright purchase electric cars can deduct its full cost from pre-tax profits. On a car costing around £40,000, this could amount to a tax relief of £7,600 in the first year.

This changes in April next year, when only zero emission cars will be eligible for first year allowances and the main rate of 18% will apply for cars with CO2 emissions of 1-50g/km.

In step with this, from April 2021 the lease rental allowance, which can be deducted from a company’s corporation tax charge, will be 100% up to 50g/km (currently 110g/km) and 85% above that figure.

Also, from April 2021, the van benefit charge changes and there will be a nil rate for zero emission vans (currently 80% of the full charge).

A further potential cost-saving fleet decision-makers could consider is that BEVs are exempt from charges relating to the ultra-low emission and clean air zones which are being increasingly adopted in towns and cities across the UK.

Road transport is said to account for 27% of the UK’s CO2 emissions, and switching from internal combustion engine (ICE) vehicles to low-emission electric vehicles (EVs) can reduce an organisation’s contribution to this.

They are also seen as a key weapon in the fight to reduce local air pollution – ICE vehicles are a major source of nitrogen oxide (NOx) emissions and particulate matter which are recognised as a serious public health issue.

This is not an issue with EVs when running in full-electric mode, although given EVs are heavier than ICE cars there is an increasing focus on the harmful particulate matter generated from their tyres and brakes.

Critics point to the pollution created by the power stations which supply electricity to the national grid, but this, too, is changing.

Organisations can also switch to renewable energy tariffs to further counter this argument if the EVs are charged at the workplace.

Many businesses which use BEVs say their employees prefer to drive them instead of ICE vehicles as they are quieter and smoother to operate.

“EVs can encourage sustainable living and are an enjoyable and real-world solution to the challenge of vehicles emissions and air quality,” says EDF.

Organisations can also boost their reputation by being seen to be an environmentally-conscious business working to lower their overall carbon footprint.