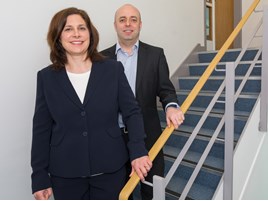 Vehicle leasing and finance credit broker, Synergy Automotive, has ramped up its growth strategy with two further board appointments.

Nicola Ech-Channa has been promoted from marketing and communications manager to director and commercial data analyst, Jean-Paul Levahn, has been made director of IT and technical services.

Helping to shape strategy and vision, Synergy Automotive said the new board members have been instrumental in driving cutting-edge IT and digital improvements as part of a £150,000 investment programme aimed at further enhancing customer service and delivery.

The six-strong board is led by MD, Paul Parkinson, who launched Synergy in 2006 and has marked year-on-year growth for the Harrogate-based business. Andrew Cope, who played a key role in the success of vehicle leasing giant, Zenith, is also a board member along with Synergy’s client services director, Gemma Manning and company secretary, Martina Parkinson.

The business has also been awarded Platinum franchisee status by Network LeasePlan.

Parkinson said: “Nicola and Jean-Paul are key to maintaining our position at the forefront of a fast-moving and growing market in which we differentiate ourselves by consistently delivering an excellent vehicle leasing experience to all our customers. Their board appointments recognise their valuable contribution as we continue to innovate, expand and recruit.”