Benchmarking is increasingly becoming an important tool in the fleet decision-maker’s armoury, enabling them to see how their operation compares to those of similar organisations.

This can help identify strengths and weaknesses and give guidance on how they can make their fleet more efficient and effective.

Benchmarking was among the topics debated at a recent roundtable, sponsored by Masternaut, which took place at Wroxall Abbey, Warwickshire. 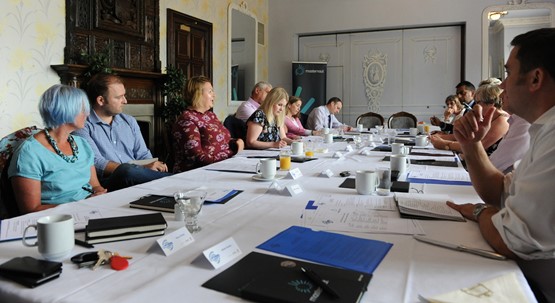 Fleet News: Do you benchmark your fleet performance against other companies?

It has a lot of customers of varying fleet sizes, so we do quite a bit of benchmarking just to understand how our fleet is operating and to ensure we are not missing a trick.

We benchmark things like our accident rate and policy as well. We do it at least half-yearly, sometimes quarterly, dependent on whether there’s a greater urgency.

It also helps us understand what other companies are doing, on the accident rate in particular: how they are getting their collisions down.

Thankfully, a lot of the time the results of benchmarking are positive and we come out of it with the view that we are doing as well as we think we are, but it is important to go through the process so you can understand what the true picture is.

If you are siloed into your own company you can miss something benchmarking will show up.

Russ O’Neil, driver risk and HGV compliance manager, Balfour Beatty: A leasing company is a good natural resource for that because it has a wealth of data you can tap into.

Ellie Barnes: It’s part of what they offer. It’s not like we pay for it as a separate service, we get a hell of a lot of extra value. It’s like having an extra member of our team.

Steve Winter, head of fleet, Centrica: One thing to watch with benchmarking is that different companies operate differently, so it is important you compare yourself to organisations that do the same sort of thing, otherwise you can get misled.

For example, our drivers take their vans home at night, but at another organisation they may leave their van at a depot overnight, and that changes things, such as how you can service a vehicle etc.

FN: What cost-saving initiatives have you introduced?

Steve Winter: In terms of commercial vehicles, we sell all our salvage at a pre-agreed value to a company called FAB Recycling and it breaks it and we buy parts back from it, which is quite unique.

This means that, for example, we can buy a rear door for one of our vans, in the right colour, with livery on, and we just bolt it on the vehicle. Instead of having to wait six, seven, or however many days it may take through an accident management company, FAB does next-day delivery and we do a dry repair.

We don’t use it for anything safety related, but it salvages our internal racking as well. It only really works if you’ve got a big fleet, but it’s quite ingenious because where else are you going to find a door in the right colour and livery at such short notice?

Ellie Barnes: We’ve really worked on our vehicle renewal programme. For us, it is actually about continually reviewing our fleet and not just automatically thinking that we will renew vehicles that are coming up to the end of life.

We look at the number of vehicles and how they are used, and that goes for the equipment in the vans as well. You find that guys aren’t using half the kit that’s in there. The more you can plan your vehicle renewals, the better. It’s saved us hundreds of thousands of pounds.

FN: How do you use technology to reduce costs or collisions?

Julie Davies: We are coming up the end of the second year of using an app for daily walk-round checks and, by using that app, our smart meter guys can also do an audit to see what stock they’ve got in the vehicles.

Health and safety are also doing risk assessments on it now as well, but it started with the daily walk-round checks. This is saving paper and books, while defects are being repaired faster than before.

Transport managers might have five or six operating centres and they can’t go round every day to pick up their defect sheets.

The reports automatically go to him now, he sees all of them and can assess what’s required.

Within that app we’ve also developed an accident-reporting feature that can be set up with a bump card so, if there is an incident on the road, the driver can take all the information needed and photos and these go straight to the insurance company.

We were losing vast amounts of money because incidents weren’t being reported within 24 hours.

The insurance company would get the third-party phone up before we had contacted it and say ‘one of your vehicles has hit mine, it’s off the road and I’ve booked a Jaguar for the next fortnight to drive around in while my car is being repaired’.

That’s where we are saving money. Our drivers still have to go back to the depot and talk to their transport manager or line manager and report the incident, but it is getting there on the cost saving.

Russ O’Neil: Dashcams are on the radar but I can’t see how they can make a difference past the telematics side of things, how they can impact on what we do.

The companies come in to sell these things and give you case studies about what you can do on first notification of loss and 50:50 claims, but...

Ellie Barnes: When you’ve got telematics data on driving behaviour such as speeding and accelerating, dashcams can help you understand the circumstances that driver was in to give a better feel for what the data means.

Also, our drivers take their vans home overnight and during our trial of dashcams we could see how they were being parked, and it became clear why we had a door mirror issue with a number of vehicles.

FN: What challenges have you faced over the introduction of electric vehicles?

Russ O’Neil: When we were looking at plug-in hybrids, we thought about how we could help our drivers get the best out of those vehicles and if we should be giving them training.

As a result, we developed a short course for those people who have taken or are taking on a PHEV.

Ellie Barnes: Do you do it as part of the choice process though? If one of our drivers is looking at a hybrid we will get the leasing company to send them a guide on the technology and how they should drive those vehicles effectively.

This means that before they make the choice they are fully informed and can make a considered decision. We have had people moan to us and send in their increased electricity bills, and we’re like ‘did you consider it?’, so now we send them a guide prior to order.

Steve Winter: Our van drivers take their vehicles home overnight and anyone that gets a pure electric vehicle goes through a four-hour BTEC course and qualification for EVs, which works very well.

Ann-Marie Dunbar, FM contract manager, Vodafone: How do you manage the home charging?

Steve Winter: Because we are an energy provider and have smart meters, we can fit two. One meter runs the house and the other runs the van.

They have sim cards in and these send the energy usage back to us and we recompense drivers in their pay.