Public sector fleets have long felt the benefits of working together, particularly when it comes to procurement through the use of framework agreements or joint tenders.

But austerity measures have driven organisations to go further and merge the management of their vehicles with neighbouring  operations – be they local authorities, police or fire services – to deliver additional cost and efficiency savings.

South Yorkshire Police (SYP) and South Yorkshire Fire and Rescue (SYFR) are among the latest to decide a joint approach to fleet management is best, with SYP’s Sarah Gilding appointed to head the new structure last June.

It has meant Gilding has gone from managing 650 cars and commercial vehicles (plus 10 motorcycles, 200 pedal cycles and 20 pieces of plant) for SYP to a combined fleet of 849 vehicles (plus 729 items of specialist equipment such as ladders and cutting equipment).

The latter hasn’t fazed her because she has been able to draw on the experience of staff within the fire and rescue team. Similarly, SYFR has benefitted from SYP’s experience with cars (SYP has 519 cars; SYFR has 80).

While some police and fire service fleet mergers have been done by creating a limited company, SYP and SYFR felt it was “an unnecessarily costly option”, according to Gilding.

Instead, they set up a strategic collaboration board, which recommended fleet management and administrative functions in a shared structure, with local specialist delivery in terms of the service, maintenance and repair (SMR) of vehicles.

Between the two organisations there are three workshops (two in Rotherham and one in Chapeltown, near Sheffield) and the board is looking at different plans and costing options. Potentially, the two sites at Rotherham may merge to create an HGV workshop and bodyshop facility, while the third workshop will handle light vehicles with a new vehicle commissioning facility.

A decision is expected imminently, with a potential merger by the end of the year. 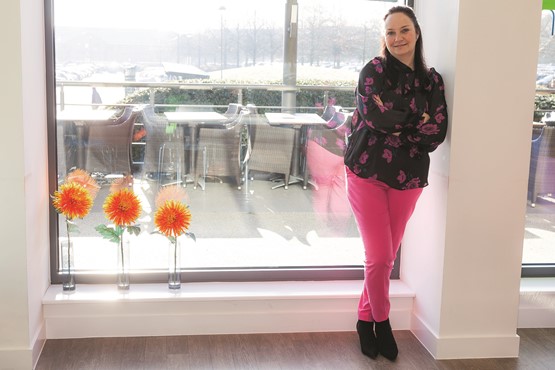 This is not the first time Gilding has overseen a workshop change. In 2014, SYP closed its mechanical workshop in Doncaster, resulting in a capital saving of £402,000. The following year, SYP was named fleet of the year 251-1,000 vehicles at the Fleet News Awards in recognition of total capital savings of £1 million (see fleetnews.co.uk, November 3, 2015).

Now Gilding has been recognised again, in the 2019 Fleet News Awards, for further savings for the SYP fleet (£286,692 through the use of car club vehicles rather than hire vehicles, an anticipated £258,500 saving from telematics and £108,900 over four years from switching to electric vans) and her ongoing work to bring the SYP and SYFR fleets together.

Alongside rationalisation of the workshops, ensuring both organisations are utilising fleet software efficiently is a “key priority” for her.

One of the first steps she took following her appointment was to identify which aspects of fleet management were the same and where the differences were between the organisations.

Although both SYP and SYFR have Civica Tranman software there are differences in the way the system is used (for example, SYFR is not using it to as “good effect as it can be” for scheduling vehicles in for a service, according to Gilding, and accidents are still recorded on a spreadsheet rather than on Tranman).

SYP’s version of Tranman is “more developed” and staff use more of its functionality.

“We want to get each system to the same position so we can do things the same way and have clear processes that will make things easier for the staff,” Gilding says.

Essentially, Civica will need to “drop the fire data into the police system” but there are security issues to resolve and a formal order will need to be placed so Gilding anticipates it could be the end of this calendar year before everything is up and running as she would like.

Once it is, she intends to extend SYP’s key performance framework to the SYFR fleet and workshops.

Both organisations outright purchase vehicles and this will continue as Gilding wants to benefit from the flexibility that it brings in terms of vehicle replacement.

Replacement cycles differ with police vehicles typically operated for five years and 150,000 miles while the fire and rescue vehicles do fewer miles and are replaced based on age.

Anything specialist is typically 10 years but some fire appliances have reached 12 years. Gilding wants to ensure that replacements are made at the “optimum time” and “we’re not out of line with any other fire authority” so at a later stage she will carry out benchmarking.

When it comes to replacing the police fleet’s HGVs (mainly horseboxes) she has been able to use expertise within SYFR to determine the right specification. The horseboxes are being maintained by SYFR instead of being sent to an external company, although Gilding says it is “difficult to quantify the savings”.

She is also increasing the number of staff who are trained to drive HGVs, which should improve productivity in the workshops.

On the car side, SYP is maintaining approximately 50 fire service vehicles, which would previously have been done externally.

Both organisations are now named on any tenders, giving SYFR the potential to adopt the telematics system which has just been rolled out to the police fleet.

SYP trialled telematics in 2014 and was convinced of the benefits, but went to tender twice before appointing UK Telematics last year.

Gilding says the system has a “two-pronged approach” – it provides data to different areas of the organisation and also gives police officers instant feedback via a light bar in the vehicle which shows green, red or amber dependent on driver behaviour.

She anticipates the majority of the expected £258,500 savings will come from reduced fuel consumption, followed by SMR, a reduction in the fleet size and accident repairs.

SYP’s in-house driver training unit will use the telematics data to identify drivers who may need refresher training. Any employee driving a fleet-owned vehicle goes through on-the-road training before they are able to drive the vehicle, while SYP also has specialist courses for response officers and traffic officers.

SYFR has far fewer incidents than SYP (63 compared to 475 over 12 months) but some of this is due to police officers using their vehicles for ‘tactical contact’.

Forward-facing dashcams were fitted to 235 SYP vehicles in 2017, following a successful bid to the Home Office for Innovation Funding, and are likely to be fitted to 30 fire service vehicles. The footage is used by SYP’s insurance unit to provide protection against illegitimate insurance claims and is expected to lead to a reduction in insurance and accident damage costs.

The footage has also been useful in criminal investigations and, in one instance, the force was able to record someone throwing a brick at the windscreen of a police vehicle.

Risk management is an agenda item on the department’s management team meetings and separate meetings are also held to discuss risk in more detail, as required.

SYP has undergone a grey fleet review with the Energy Saving Trust (EST) and, as a result, is looking to put restrictions in place with regards to the age and CO2 emissions of grey fleet vehicles, and to move from an in-house approach to licence checking to using an external company.

SYFR already uses an external company for licence checking but Gilding intends to do a review of its grey fleet.

The EST review commended SYP’s car club scheme and has recommended it be extended to grey fleet users.

SYP originally introduced 29 car club vehicles to its external enquiries unit in May 2017, followed by two car club vehicles at force headquarters. Gilding is considering adding another four, giving each district area access to one.

The final area of fleet management Gilding is working on is fuel – in terms of fuel cards/fuel bunkering (SYP has both, while SYFR has “less than a handful” of fuel cards) and a shift to ultra-low emission vehicles.

SYP introduced 10 Vauxhall Amperas range-extenders to its fleet in 2014 for day-to-day enquiry work and Gilding hopes to soon replace these with full electric cars, subject to consultation with the users.

She has also introduced 11 pure electric Nissan e-NV200s, following a successful six-month trial with five in conjunction with the EST and Highways England.

Ten of the 11 vehicles are being used by facilities management with the remaining vehicle used by driver services.

One of the biggest challenges with merging fleets is cultural change.

Gilding acknowledges that “any change brings an element of concern for staff” and it’s essential that it is communicated in the right way.

“That’s why we’re trying to work together on the (workshop) plans. Rather than saying ‘we’re going to do this’, we’ve got the staff involved with the ideas and to look at the possibilities and how it would best work,” she says.

Cultural change has also simply been a question of time while people get to know each other and build relationships.

“We have joint management and health and safety meetings now,” Gilding adds. “Staff sharing knowledge and experience shows the benefit (of collaboration).”

Last November, Sheffield City Council announced plans to create a clean air zone in 2020 and Gilding is keeping a close eye on what this may mean.

The plans are still under consultation but could mean a charging system is introduced for the most polluting vehicles, such as buses, taxis, lorries and vans, which use the inner ring road.

Gilding says: “I can see the merit of clean air zones, my concern is any financial impact that this may have on our organisations if our vehicles aren’t exempt. While our strategy is to increase the number of ULEVs, this could still cause issues if Sheffield brings in a clean air zone during 2020.”

South Yorkshire Police and SYFR wins 2019 Fleet News award for Fleet of the Year – up to 1,000 vehicles