The London Borough of Hackney is introducing more electric vehicles and using biofuels in other vehicles...there is little this council won’t try in bid to help the environment.

It has set a target of having more than 40 electric vehicles (EVs) on its fleet of 400-plus vehicles by the end of the 2017/18 financial year, with a view to the entire fleet eventually becoming electric.

It also wants to introduce a small number of electric pool bikes for journeys where the employee does not need to carry anything.

Norman Harding (pictured), corporate fleet manager at the London Borough of Hackney, says the council is “keen to push the boundaries” and is always willing to try different technologies.

“Hackney Council is really environmentally aware,” he says. “It really wants to ensure the local residents and community of Hackney have the best possible life opportunities – and that includes clean air.”

Exactly when the fleet will be 100% electric depends on how rapidly the EV market for commercial vehicles develops as the majority of the council’s fleet is commercial vehicles – it currently has 270 vans and 103 HGVs, 16 cars, plus plant and wheelchair-accessible buses.

“We don’t anticipate it being totally electric for probably another 10 years because while technology is developing all the time and there are some manufacturers getting close to making electric available for heavy trucks, many of our commercial vehicles, such as our refuse trucks, our road sweepers and our skip loaders, all require some additional energy to run the bodies as well as the truck chassis,” Harding says.

The council’s interim solution is to use biofuel (see panel overleaf).

It has had EVs for the past 10 years – its first was the Citroën Berlingo Electrique.

It was also among the early adopters of electric van conversions, running an electric Peugeot Boxer, converted by Allied, about seven years ago.

“We managed to get grant funding through the Cenex programme for the Allied conversion,” Harding says.

“We had a few teething problems to start with – mostly down to technical issues with the conversion, which Allied was quite responsive to – but once we had ironed those out we ran that quite successfully for five years.”

However, that experience has made Harding decide it is best, where possible, to “stick with global brands rather than smaller company conversions” and when the Allied conversion reached the end of its lifespan it was replaced with the Nissan e-NV200. 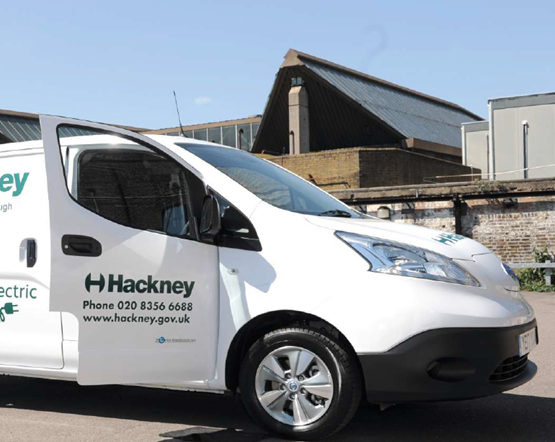 The council has 13 EVs on fleet, including a Nissan Leaf and a Peugeot Ion, which it has had for the past three or four years.

The majority of the EVs being added to the fleet this year will be Nissan e-NV200s.

The council has just taken delivery of three, which will be used by its courier service for internal post and parcel delivery between various buildings, and a further 14 are on order.

Two vans will be used by its library service as they only travel about 20 miles a day and will therefore only need charging a few times a week.

The council’s waste supervisors, who are responsible for monitoring the quality of street cleanliness, will also be using electric vans.

The Leaf and Ion are used by Hackney’s street team who visit the local community and encourage private business and local residents to buy electric vehicle technology.

Arguably its most high profile EV is a Tesla Model S, which was added to the fleet in June last year and is primarily used for the speaker’s duties.

Harding is keen to stress that the Tesla works out cheaper on a total cost of ownership basis and is saving the taxpayer money compared to the previous executive car, the Mercedes-Benz E-Class.

“When you do the business case, the Tesla is more economical to run on a wholelife basis so it wins on a financial environment and it thrashes all the competition from an environmental point of view,” he says.

“It’s about £2,000 per year cheaper to run than the E-Class. That’s largely because of the reduction in fuel spend because we know exactly how much our electricity costs and because we charge it up on a smart meter I can calculate to the penny how much the Tesla is costing us to charge.

“We had the E-Class on a lease contract over four years and our real-world fuel consumption was nearer 22mpg, bearing in mind we’re an inner London urban local authority so the sort of runs it was doing meant it would never get up to its optimum fuel consumption figures.”

However, the official range for a pure EV can also be unrealistic.

“You have to be really careful when you do the business case for an electric vehicle that you can make it work financially. If you’re really pushing the boundaries of the vehicle’s mileage limitations, that brings in an element of unreliability to your operations. If the manufacturer claims its vehicle has a mileage range of 100 miles and you do the business case on that figure you could make the financial argument work.

“But in real-world driving operations, particularly in the winter when you’re also using energy for heating and lighting, it’s unlikely you’re ever going to get anywhere near that 100 miles range.

“The best we’ve ever got out of an electric van has been about 70 miles. At the moment we’re putting vans into service where the day-to-day mileage is really low so there are no range issues. We know the van will easily do a day’s work and get back to its base.

“When you’re working with any alternative technology you’ve got to match it very carefully to the task you expect the vehicle to do otherwise you will be setting it up to fail and we don’t want to do that.”

He adds: “As long as you’re sensible about what you’re trying to do with the vehicle then it will work. If you’re a rep constantly doing 200 miles a day then it’s not going to work.”

The Government’s plug-in grants (up to £4,500 off the purchase price of an electric car and up to £8,000 off an electric van) have been essential to the business case.

The council has also benefitted from Mayor of London’s air quality fund to assist with charging infrastructure.

It has 38 charging points across 13 sites, following a formal tender process which it carried out with help from Cenex to establish the specification and conduct site surveys.

Most are seven kilowatt chargers but, in anticipation of larger electric vehicles coming to market and joining the fleet over the next 18-to-24 months, the council has installed     a handful of 22 kilowatt chargers as well.

One problem Harding has encountered is that fully loaded vans do not have space for the charging cable and it has to be kept in the passenger footwell, which isn’t ideal when several employees are using the van, but there have been no other operational issues. Drivers have reacted positively.

“When we introduced electric vehicles we really hit that psychological barrier and a lot of people wouldn’t even get into an EV but as time has gone on a few more of them have ventured into trying them,” Harding says. “I think they were very surprised just how well they drive and more and more people are buying into them and they’re quite happy to drive the vehicles.”

Fleet could be fossil-free in 18 months

The London Borough of Hackney has used biofuel made from recycled cooking oil in its commercial vehicles since 2008, cutting its CO2 production  by around a quarter (24.8%) last financial year.

“Our older fleet used to run happily on 100% biofuel but, as we are starting to replace older vehicles with the latest emissions criteria Euro 6 vehicles, the manufacturers’ warranties prevent us from running 100% so the ratio of vehicles running 100% relative to 30% is changing,” Norman Harding says.

He is hoping to start using hydro-treated vegetable oil which has shown in an early emissions test in one of the council’s refuse trucks to reduce NOx by nearly 70%, as well as reducing carbon.

The next steps are to do further emissions testing, get support from vehicle manufacturers, develop the supply chain and get the fuel “at a realistic price”, according to Harding.

“If hydro-treated vegetable oil does prove to be as good as we think, it’s feasible that once I’ve got the supply chain set up my whole fleet operation will be running on a fossil-free fuel,” he says.

“This would mean either electricity    or a waste vegetable oil product in 18 months, and that includes plant.”

The London Borough of Hackney is reviewing its grey fleet (employees using personal cars for business journeys) with the intention of removing their use completely – subject to legacy terms and conditions.

A number of employees have an essential user allowance as part of their employment package but the council has found it is easier for them to use public transport rather than a personal car given the bus, train, Tube and Docklands Light Railway are all options. As a result it is no longer offering a car user allowance to new employees.

It is also introducing a new payroll system which will require employees to notify their line manager if they need to use their personal car for a particular journey.

If a car is the best option for a journey, pool cars are available and the council also intends to add a small number of electric pool bikes to its fleet.

The Nissan NV200 Combi goes on sale in the UK in February priced from £15,685, providing van-sized carry capabilities and flexible passenger space.

The London Borough of Hackney has recognised the buying power that a co-ordinated procurement programme can achieve and is now looking to take it to the next level having saved hundreds of thousands of pounds and benn the first local authority to be made business champion.

Metrocab has become the first zero-emission-capable taxi to be licensed by Transport for London to operate on a trial basis as a London Hackney Carriage.