Green edition: Nissan reveals its vision of the future 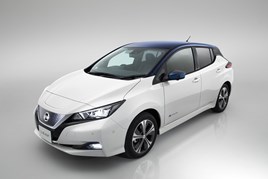 Nissan outlines its vision of the future electric ecosystem in Europe at recent The Car and Beyond event. John Maslen reports

The Government has been urged to do more to drive the uptake of electric vehicles (EVs) as manufacturers gear up to spend billions of pounds on their development.

The call was made by Paul Willcox, chairman of Nissan Europe, at the Nissan Futures 3.0 conference, which included the launch of the new Leaf electric car.

He revealed that more than €4.2 billion (£3.75bn) had been invested by parent company Renault Nissan Alliance in a “massive bet” on an electric future.

He says governments needed to show their support for an emission-free future, citing Norway’s long-term commitment to EVs that has led to zero-emission vehicles having a market share of more than 25%.

For Nissan, 50% of its sales in Norway are electric.

The Norwegian government has led Europe in offering clear motivation for drivers to move to EVs, with tax cuts including the removal of VAT, free city centre parking and access to bus lanes.

Other European governments, including the UK, have said they are committed to carbon-free transport within decades, but specific plans have yet to emerge.

Willcox says: “Many governments across Europe should sit up and take notice; the time is now to act and give people a reason to go electric.

“We believe it is time for these governments to help consumers and businesses make the right choice. All governments need to step up and invest in support.

“Change must come, but it will take more than car companies to make it happen.”

In the next decade, Nissan predicts more than 30% of cars sold in Europe will have some form of electric propulsion.

Currently, electric vehicles, including plug-in hybrids, account for around 1% of the European market, with 200,000 units sold last year, including Norway which accounted for around 25% of the market.

A rise in European sales to 30% of the market within a decade would see zero-emission capable vehicles selling around 4.5 million units annually in a total car market of 15 million.

“We call it the acceleration of electrification,” says Willcox. “We believe we will see the same adoption rates that were seen 100 years ago when the combustion engine car went from gimmick to absolute necessity.

“It is a seismic shift and a giant leap forward that will be pinpointed by historians in years to come as a key moment when things advanced in a new way and reshaped the way we live.

It will have a profound impact, not just on our industry but many others, too. The auto industry ripples will turn into multi-industry waves.”

Willcox says the market will experience “a decade of disruption unlike any other”, where those who embrace the challenge of change will be the ones who come out winning.

Changing fuel choices will be just one part of the challenge businesses face, which also include the appearance of new suppliers and new attitudes to travel, with growing interest in alternatives such as car sharing and autonomous vehicles.

Willcox adds: “I stood up eight years ago to share our vision of electric vehicles and many people thought we were crazy, saying we were bringing unproven technology to our customers, wasting our shareholders’ money and some questioning whether electrification was even necessary.

“We have a very different picture here today. Now it is clear the world is changing. Consumer attitudes and needs are transforming. Our industry is evolving and new challenges are emerging. It is simply an incredible time to be in the automotive industry.”

The new Leaf is the first to offer bi-directional charging, which means vehicle batteries can be charged, but also feed their power back into the grid when required.

In the right circumstances, fleets could access ‘free’ charging for their vehicles, not including infrastructure costs.

Vehicles will be charged when demand is lower and electricity prices are cheaper, but power from the battery will be sold to the grid at peak times when demand, and prices, are higher.

Owners will be able to set a minimum amount of charge they want for driving the next day.

The supplier will then automatically trade electricity from the battery, topping it up during off-peak periods and selling it at peak times for about four times as much.

With the right usage patterns, the service could net users £350 a year from selling electricity back to the grid at peak times.

A pilot project for the scheme has already been launched in Denmark, with further countries to follow.

In the UK, utility company Ovo will be able to offer the ‘vehicle-to-grid’ service from January next year with a focus on fleet operators.

Paul Willcox, chairman of Nissan Europe, says: “Step-by-step we are removing any barriers to electric vehicle adoption – from infrastructure investment, to how people access the power itself.

“By letting people charge their vehicle and their home from each other, we can use our time and energy supplies more efficiently than ever.”

Nissan is also rolling out a home energy storage service, which uses recycled Leaf batteries to store power for later use, including energy from solar panels.

Van fleets will be a major focus for the transition to electric vehicles, according to Nissan.

The claim comes as Nissan reveals a new longer-range version of its e-NV200 electric van, in a bid to increase demand for zero-emission vehicles in the last-mile delivery market.

The new model will have a new 40kWh battery, giving it a 60% longer range of up to 174 miles, 62 miles more than the outgoing model, which has a 24kWh battery.

The new model’s battery can be charged to 80% in 40 minutes using a fast charger, or to a full charge in seven-and-a-half hours using a standard charger.

Nissan says it has managed to improve the performance of the battery with no increase in its size, so there is no impact on load space or payload.

Current data indicates the e-NV200 has a gross vehicle weight of 2,250kgs, with a maximum payload of 694kgs and a cargo area of 4.2 cu m. Definitive data is subject to the final homologation process.

The e-NV200 is expected to go on sale before the end of the year.

Nissan says the van represents a key pillar in its wider commitment to cutting the level of CO2 emissions in city centres caused by professional drivers making deliveries and collections.

Since 2000, the UK has seen a 4% rise in the number of cars, but a 38% increase in vans, fuelled by the boom in online shopping and home deliveries.

Nissan demonstrates fully autonomous car in Tokyo – due for 2020 release

Nissan has demonstrated a prototype of its most advanced autonomous driving technology, planned for real-world use from 2020, on public roads in Tokyo.