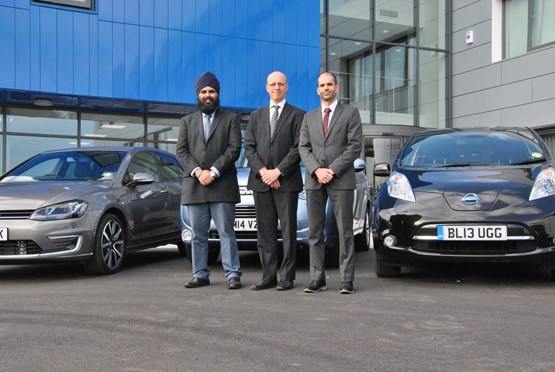 As Cenex celebrates its tenth anniversary of supporting fleets, manufacturers and the wider vehicle industry, the low carbon vehicle landscape has been transformed. Back in 2005, there were no electric vehicles (EVs) and the only hybrid available was Toyota Prius and Honda Insight. Average CO2 emissions on new vehicles sold was 169g/km.

Cenex was created to bridge the gap between technology manufacturers and end users.

“There was what is often known as a ‘valley of death’, so we were formed to look at that gap in the transport sector,” says Rob Anderson, programme and communications manager. “At the time, there was some slow growth in EVs, a little compressed natural gas, and a few other technologies, but no one really had the confidence to take those vehicles on their fleets because no one really knew what they did or how they performed.”

Initially publicly funded, Cenex ran a number of vehicle trials, with the aim of gathering insight into vehicle suitability for certain roles. “We’ve always focused on real-world demonstrations of technologies, and how they can work for fleets and businesses,” says Anderson.

Fast forward to 2015 – myriad EVs, hydrogen fuel cells and average new vehicle CO2 emissions of 124g/km – and the role of Cenex is a little different. “We’re now no longer directly funded by the Government. All the work we do now, we have to bid and tender for,” says Anderson.

Amrit Chandan, technical specialist in low carbon vehicles, sees an agreeable balance. “It’s a good split between looking at now-established technologies and getting them out there, and investigating future developments and getting them to the stage where they’re market ready,” he says.

But it’s not just the vehicles themselves that Cenex looks at – its short-to-medium term projects are wide and varied.

The deadline for the Energy Savings Opportunity Scheme (ESOS) is fast approaching (December 5), and Cenex is operating as an assessment body for the transport aspect of the scheme. More information on the scheme and compliance for fleets is available at fleetnews.co.uk/esos-compliance.

Anderson, who is a lead assessor, says: “The general ethos is to help companies identify cost-effective energy saving measures.”

“It’s the first scheme for a long time from Europe that does actually include transport – which has caught a lot of people out.

“We’re working with a number of energy assessors who focus on buildings and process, but don’t have transport knowledge. These consultancies are using our knowledge and subcontracting the fleet element of the audit to us.

“With about a quarter of the companies we’re working with now, their fleet accounts for about 90% of their energy use and their buildings less than 10% . They’re the ones that will be OK, because the fleet will have a good grasp of what’s needed. However, they’ll still need a transport-minded lead assessor to sort it out – it’s not something that can be done by the fleet manager – and the assessor needs transport knowledge to be able to offer useful savings.”

As the deadline draws closer, Anderson expresses concern for the progress of some companies.

“If companies haven’t engaged with a lead assessor by now, they are perhaps in trouble,” he says. “I’ve spoken to a lot of assessors who have now stopped taking on work, because they’re booked up.”

It’s the companies for whom transport forms a smaller but signficant part of energy usage, who have never had an energy manager look at it before, for whom ESOS presents the biggest risk, but also the most opportunity, according to Anderson.

“An energy manager will talk in a different language to a fleet manager – kWh vs mpg,” he says. “This can often cause a bit of friction, but it’s resolvable.

“The real issue is the companies that haven’t even started yet. A lot of the challenge is establishing what data exists. Until the data lands on our desk, we can’t do any analysis.”

The scheme aims to provide opportunities for energy saving. So, although the audit comes at a cost, the theory is that suggestions will be made that allow companies to reduce energy usage and create savings.

“When it comes to identifying measures, it covers everything and anything from things like telematics, driver behaviour and training, aerodynamics on commercial vehicles and, because of who we are, we’ll look at low carbon vehicles if we think the mileage profile is right,” says Anderson.

The low carbon vehicle market has matured over the last 10 years, and a lot of Cenex’s work has a strong focus on implementation as so many of the technologies it has seen develop are now mature enough to be used in businesses.

“A lot of the work we’ve done on hydrogen is about market preparation,” says Anderson. “Working with fleets and technology providers to shape the vehicle when it finally hits the market, and ensuring the infrastructure works.”

Chandan adds: “We’re looking at step-wise change, rather than slow, incremental change, where we can.”

Steve Carroll, senior technical specialist, feels that low carbon vehicles are no longer just a tick box option to be seen to be green.

“The challenge every fleet has is finding out where these vehicles work economically,” he says. “Fleets are looking hard at which vehicles are right for them, and when to introduce them.”

​Cenex’s process works by logging usage profiles on a cross section of the fleet, then feeding it into a computer model to identify the areas where specific types of low carbon vehicles would be suitable and make savings.

The organisation has worked with fleets including British Gas and the Environment Agency on the roll-out of EVs into everyday usage.

As well as working with private fleet companies, Cenex is working with local authorities and councils to look at ways they can encourage lower carbon vehicles.

As authorities begin to look at low emission zones, it makes the vehicle choice more important.

“We welcome the roll-out of low emission zones in cities, because that helps us to implement the technologies we believe in,” Carroll explains. “Once you start looking at emission restriction zones, it gives these types of vehicles the economic push that they need to succeed.

“All of a sudden, an EV is a very easy choice to make.”

Hydrogen is another growth area for Cenex, and the body believes the fuel cell technology is nearly market-ready.

“We’re at a phase of market readiness,” says Chandan. “Cenex is currently involved in a number of hydrogen projects, bridging the gap between manufacturers and fleets, talking to fleets about the vehicles, finding the sweet spot for vehicles in their fleet where it works economically.”

With production versions of Hyundai’s ix35 fuel cell model already available in the UK, and Toyota’s Mirai model arriving shortly, Cenex believes that in certain use cases it is becoming a viable option.

“If they don’t make economic sense, these technologies don’t stand a chance,” says Chandan. “Government policy directives, like the congestion charge and tax landings, do help. Hydrogen will play a role in the future, and we’re at the really exciting phase where it’s beginning to get into the hands of the users.”

Cenex is part of the European-wide Hydrogen Mobility Europe (H2ME) project, which is supporting the rollout of 350 vehicles and 30 additional filling stations across the continent and the UK. Chandan says that other countries, particularly Germany, are providing good opportunities for learning.

“A lot of the OEMs have bases and strong research facilities, so we’re learning from them,” he says.