Fleet boss Terry Pycroft embraces the role of zero emissions champion and is keen to share his experiences with other councils. Stephen Briers reports.

Leeds City Council was the first local authority to publish its clean air zone proposals, detailing how it intends to bring the UK’s fourth biggest city into line with the air quality standards.

The proactive approach taken by councillors, particularly when compared to the four other cities required to implement a clean air zone by 2020, is evidenced by their individual actions.

Deputy leader Lucinda Yeadon, for example, drives an electric car, while the fleet has been a long-time pioneer of alternative fuels, from electric to gas. 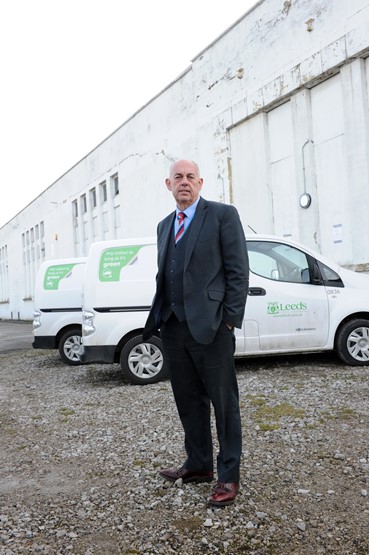 Terry Pycroft has headed the council fleet for the past 13 years, but any suggestion that longevity and familiarity breeds complacency and lethargy is dispelled within moments of meeting him at the council’s fleet workshop and HQ on the outskirts of the city centre.

Pycroft is a genuine innovator, enthusiastically searching out new technologies and new processes and voluntarily using his own fleet as a test-bed for both.

He is the ideal champion for zero emission vehicles, embracing the role wholeheartedly by sharing his experiences on alternative fuels with other fleets at events hosted by
the council.

It undertook extensive trials before going to tender 18 months ago, with much of the focus on payload, range and driver ergonomics.

“We knew all about the emissions issue in Leeds and I wanted to do something about it,” Pycroft says. “We had some vehicles to replace so we started there.

“I have a personal desire to be innovative and I am always looking for the next big thing. I learned that from my old fleet manager Frank Atkins (see panel on page 26) and I’m teaching my team to take the same approach.”

He started his EV project by assessing van mileage and where vehicles are parked at night (they all return to one of council’s depots). Then it was about “winning hearts and minds” at a senior department level.

Council director Neil Evans, who has responsibility for low carbon and air quality, gave his full support so a number of EVs were obtained for the drivers to test. 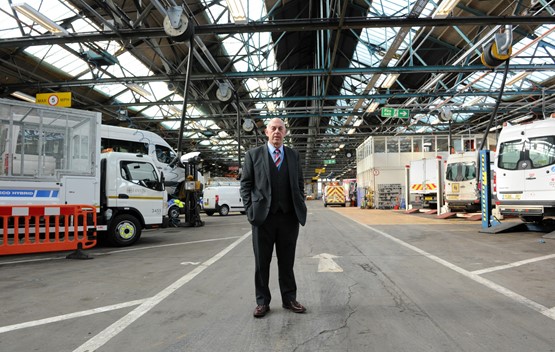 Acceptance was rapid and unmitigated. “On day one, they had charge point anxiety which was partly perception because of the different gauges in the vans. But they got used to it very quickly,” Pycroft says.

However, while the environmental argument was clear and the drivers were firmly on board, the final decision came down to the financial case, based on total cost of ownership – price, mileage, maintenance and fuel.

The cost was calculated on a five-year cycle, although the council has since opted to take the vehicles over six years. It devised its own residual value based on just less than 50% of the value of a diesel alternative (resulting in a 7% RV), although Pycroft believes this is probably understated.

While the purchase price is higher than diesel, fuel and SMR costs are significantly lower, netting an overall saving of £1,000 per vehicle over five years, based on 10,000 miles a year and a 60-mile range versus 40mpg for the diesel van.

(So far, maintenance costs are coming in lower than forecast due to reduced tyre and brake wear.)

Job done; case made. Well, not quite.

The council faced a bigger issue, one that will challenge any organisation looking to invest in a large number of electric vehicles: charging infrastructure and capacity.

“We surveyed our sites and most could only charge one or two vehicles,” Pycroft says. “This wasn’t due to the power supply of the building; it was because of the local grid. There wasn’t sufficient supply capacity. This is the big issue.”

His solution was to identify other locations for charging points, installing 14 at Woodhouse Lane car park in the city. At night, they charge the council’s EVs; during the day, they are available for the public to use.

He has also fitted a couple of charging points at each depot, part-funded by the Office for Low Emission Vehicles with the remaining cost rolled into the maintenance bill over the vehicle lifecycle. The full network totals 90 chargers.

“We are also piloting a home charging scheme for volunteers who have off-road parking at the side of their house,” Pycroft says.

“We fit the charge units and pay them per night to charge the vehicle. We have seven to date and plan to have more, which solves the infrastructure issue at our sites. If they leave the authority, we remove the unit.”

Home charging could enable the council to double its electric fleet to 220 vehicles. However, it still has some way to go to meet its objective of a fossil-free fleet by 2025. 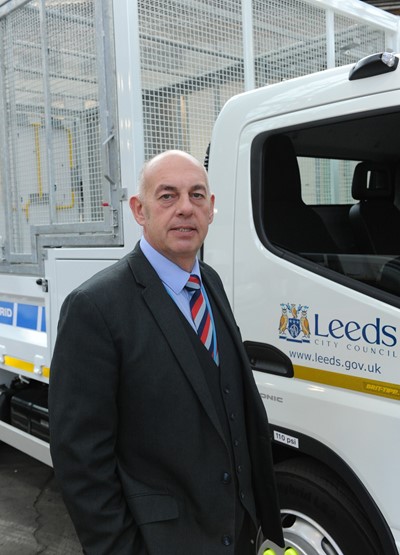 It buys everything outright, a decision dating back to 2003 when both Leeds and neighbouring Bradford turned away from contract hire and external leasing.

“Leasing companies were hitting fleets hard for charges then,” Pycroft explains. “Buying vehicles is a good fit with our workshop. It helps us to save money because we can sweat the assets and run them as long as we want, providing flexibility when needed to benefit in the future.”

The typical operating cycle is six years for vans and HGVs and five years for refuse trucks, but this can fluctuate dependent on business need. Pycroft is mindful that older vehicles require more maintenance, but he has found a formula for success thanks to the insight from the workshop.

“We found the peak for most vehicles is four years,” he says. “At that point, they require a major service, which costs more money, but then the maintenance costs settle down and you can get several more years out of the vehicle.”

The workshop plays a vital role in enabling operational flexibility. Staff are multi-skilled so they can take on anything from small vans to complex HGVs and they have all been trained to City and Guilds standards to work on electric vehicles.

The facility will also play an important role in the council fleet’s electric future as Pycroft installs solar panels on the roof to power both the site and electric vehicle charging points. Recycled rainwater will be used to wash vehicles.

The investment in eco technology will bring the workshop full circle; it was built in 1934 as a tram shed, housing vehicles that ran on electricity!

“Without the workshop, we wouldn’t be able to do a lot of this work,” Pycroft says. 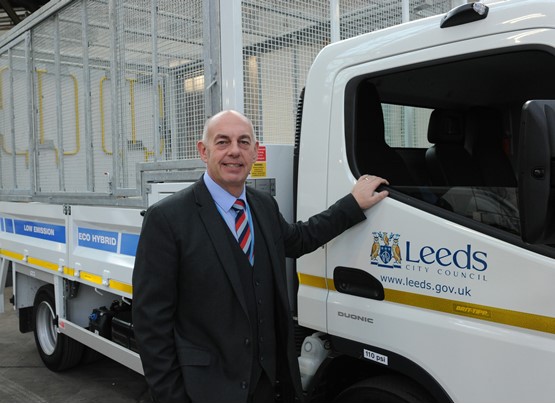 “It has enabled us to save money and, as we modernise this building, our long-term strategy is to run it 24 hours a day to bring in additional income, while improving ‘up-time’ for front line fleet operations.”

Despite all the focus on electricity, it isn’t the only alternative fuel on the fleet. Pycroft has been running compressed natural gas (CNG) trucks since 2009 and believes the fuel has a big future.

“CNG is really starting to take off,” he says. “We’ve had no maintenance issues and we’ve been running one for nine years. We’ll continue to run it until it breaks to see how long it will go, forming part of a ‘longevity’ project.

“My idea was to have a wagon for food waste and we’d use that for CNG. It didn’t take off, but we used it as a pilot for a full-blown CNG station that will be live in mid to late 2019.”

The station, which will be open to the public, will be an alternative fuel site with CNG, electric and LPG. It will add hydrogen in due course. 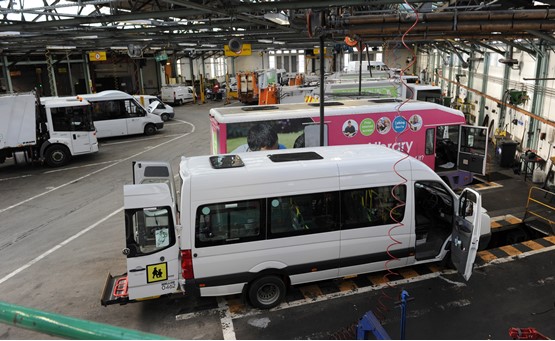 “I’ve been limited by the fuelling infrastructure to five CNG trucks,” Pycroft says. “But I’d have 50 if I could, and this new station will help.”

He’ll need to consider all options to meet the 2025 fossil-free deadline; the council’s replacement cycle means he will have to stop buying diesel and petrol vehicles by 2020.

“It’s a challenge, but it’s achievable,” he says. “It will be primarily through electric and CNG but I’m also watching hydrogen and I have a demonstrator van coming in for a trial. Hydrogen will probably be the late 2020s, though.”

An ‘appetite’ for innovation

Terry Pycroft’s long-term career plan was to be an engineer. He started as an apprentice in the fleet workshop at Bradford Council before being appointed as a full-time engineer upon qualification.

Objective achieved, but that only served to fuel further ambitions, first as technician, then supervisor, assistant workshop manager, workshop manager and, eventually, fleet manager – all at Bradford. He joined Leeds City Council as head of fleet services in 2005.

“All I wanted to do was to be an engineer, but I had an innovative fleet manager at Bradford (Frank Atkins) who was always looking at new technology, such as LPG, electric and CNG as far back as the 1990s,” Pycroft says.

“That inspired me and, as the opportunities came up, I had an appetite to do them.”

He took an MBA in management to add people skills to his engineering expertise and is now responsible for a fleet team of 53, including 28 in the workshop and a vehicle safety unit of four.

The safety unit undertakes training for all 2,000 drivers – staff and agency – for CPC purposes and as an assessment for the ‘passport to drive’.

The team is also developing a fleet ambassador course to address road attitudes among van drivers who, as Pycroft rightly points out, “are the authority’s ambassadors”. It will launch later this year.

Pycroft adds: “I now have a dual role: policing and monitoring compliance for our O-Licence and fleet management focused on tax, procurement, specification, maintenance and disposal.”

Terry Pycroft has been asked by several organisations for advice about investing in electric vehicles. This is his five-point plan:

3. Do site surveys for charging capacity to identify the number
of points you can install.

4. Do the financial business case – 50-60 miles per day is the optimum travel distance.

5. Win hearts and minds to get buy-in from senior management and drivers – do the detail on the ‘communications’ plan.

Leeds City Council has taken delivery of the first of 42 electric vehicles it is adding to its fleet.