Gnewt, the electric-only pioneer, is pushing the boundaries 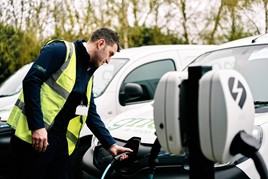 As one of the early pioneers of zero-emission logistics, Sam Clarke continues to be one of the most forward-thinking.

Ten years ago in November he founded Gnewt, the UK’s first – and still only – electric-only last-mile delivery company.

Gnewt has now delivered more than 10 million parcels in central London, travelling more than 800,000 miles while saving around 500 tonnes of carbon.

The company was acquired by Menzies Distribution in 2017, but Clarke has remained as its head of business development, a role which has seen him explore – and push – the boundaries of what is possible with current zero emissions technology.

This has seen Gnewt – which stands for Green New Transport – consistently joining forces with organisations such as Transport for London (TfL) and Innovate UK on projects aimed at making urban logistics more environmentally-friendly.

These have included ‘portering’ (read on for details) and the Low Emission Freight Trial (LEFT), which focused on trying to incubate and encourage larger electric vehicles on the streets, recognising there is a shortage in this particular area.

“While the public is more understanding of electric vehicles than they were, the technology hasn’t really advanced that much,” says Clarke, who adds that the Renault Kangoo ZE and Nissan e-NV200 vans are the mainstay vehicles on Gnewt’s 100-strong fleet.

“The batteries are now more energy dense, so those two vehicles have improved in range over the years, but not by that much: 30, 40 or 50 miles maybe, while payload and cargo space are the same.

“The jump up to the bigger ticket items like the Iveco Daily Electric and Renault Master Electric is very expensive.

“The range on some of them is still not much better, there’s a bit more cube and a bit more payload, so it is a huge challenge.”

To counter this, rather than developing new vehicles, LEFT, which was a collaboration with TfL, looked at whether it was possible to make existing electric vans bigger.

“We effectively took an e-NV200, chopped it up and extended the chassis, made it taller and longer,” says Clarke.

“Critically, we didn’t mess about with the drivetrain or the batteries because we knew the eNV200 is a robust and reliable vehicle.”

The work with Voltia saw the vans modified to offer up to double the cargo space (it is available in 8cu m and 6cu m variants) of the standard model.

Gnewt is now operating 26 of these vehicles, which were also used in its trial of portering: essentially turning a van into a warehouse on wheels by loading it with parcels before meeting a number of foot couriers – ‘porters’ – who take sacks and parcels to their final destinations.

This started as a project with TfL looking at different ways of working in an urban area and evolved into a subsidy-free portering pilot for the summer, which saw Gnewt use Ford’s cloud-based, multimodal routing and logistics software Mode:Link.

“Every day, each delivery driver has to arrive at the depot, get all his kit, scan his parcels, do his sortation, load his van and drive into town, which might take up two hours of an eight-hour day, whereas the guys on the streets are getting their sacks of parcels within 30 seconds and within another 30 seconds they are at the front door of the first delivery,” says Clarke.

“Although you’ve got more people delivering, they are doing fewer hours so you may have two or three people doing two or three hours every morning rather than having one person doing eight or nine hours,” says Clarke. “Also, with portering you may be able to have just one vehicle in an area instead of four or five, so there could be cost savings on leases as well.” 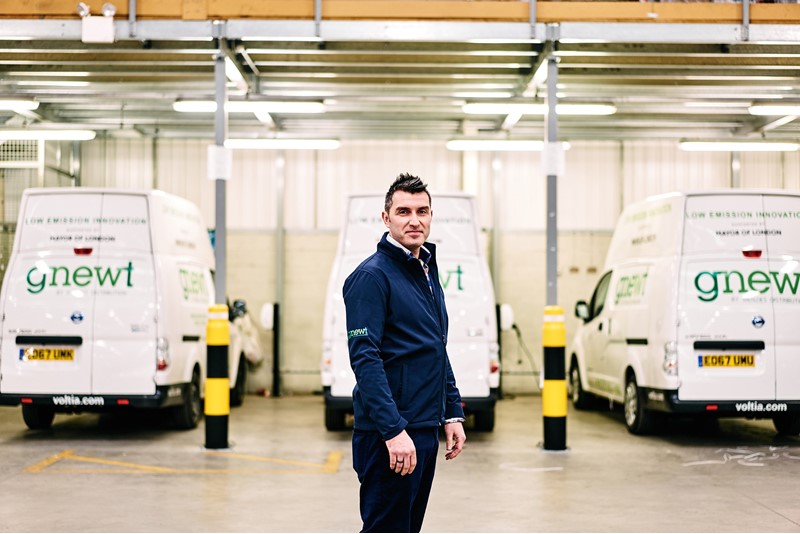 Clarke says there is still plenty of work to do before portering becomes commercially viable, but it has the potential to be a successful part of a multimodal approach.

Cargo bikes fall into the same category. Although they, too, have the potential to deliver parcels emissions-free as well as reducing congestion, Clarke feels they must be used as part of a wider approach.

“I think there’s a risk of going ‘oh, we must do cargo cycles’, but only end up making a much more disparate logistics supply chain,” he says.

“If you do things in isolation, the business case doesn’t stack up and the supply chain becomes more disparate, which is less efficient and costs more.

“As part of a multimodal approach with lots of different pieces of the puzzle working in harmony, which is a lot more complicated to instigate, then, certainly in the urban areas, I think they can be effective.”

Clarke adds: “You need to look at the comparable costs of all the different variables, and part of these trials is about understanding that, because there is no point doing these things for innovation’s sake and for blue sky thinking unless there is ultimately a commercially viable solution at the end.

“I do think portering has a future, but we need to do it step by step. We’re not going to jump in with two feet because you can’t take that risk. Service is paramount, we have to make sure everything is delivered on time. That bit is essential.”

This is a point Clarke is particularly passionate about: he wants changes to be meaningful, and not just window dressing.

“There is a lot of what I like to call ‘greenwash’, in terms of there’s an awful lot of very clever marketing pitches that make some companies look like they’re doing a great deal with cargo bikes, for example, but when have you ever seen one on the road?

“As a proportion of their fleet it’s either zero or largely irrelevant, but it looks good on a picture.

“When we started the business we had small depots in town, we had cargo bikes and very quickly we diversified away from bikes and into vans because we just had to carry more stuff per person.

“As a result of the Menzies tie-up we’ve got a very large shed in Bow, East London, where parcels are trunked to us rather than in Central London where it is a lot more expensive.

“Setting up micro consolidation in Central London is really only for the very wealthy logistics companies to use for a marketing exercise.

“There is only so long we can get away with the big companies looking like they’re doing something, but not actually doing anything at all.

“This is just not acceptable if we are going to try to improve the air quality, so we need to make sure the media portrays these initiatives as ‘is this really happening?’.

“They are real numbers which show what we are doing, not just pictures.”

The wider transition to electric vehicles is being driven by legislation and initiatives such as clean air zones (CAZs) and London’s ultra-low emission zone (ULEZ), meaning logistics companies are having their hands forced to adopt the technology, says Clarke.

No such thing as ‘free delivery’

This means consumers should expect to start paying to have parcels delivered.

“We are all operating under intense pressure with very low margins, with a public audience that expects everything to be delivered within an hour or a day for this phrase which I detest more than any other – free delivery,” says Clarke.

“It isn’t free, so we are being asked to do more and more for less and less. I would like to see better education at the point at which people are buying things.

“For all of us who are internet shoppers, we need to be prepared for the fact that we will have to start paying for our deliveries.

“It’s not just that someone is trying to make a quick buck because the margins are small already. So there should probably be some degree of regulatory intervention which allows us to be able to charge a little bit more without it being anti-competitive, giving the opportunity, therefore, to invest in low emission vehicles.”

One advantage Gnewt has over traditional rivals in the sector is that it was formed specifically to operate electric vehicles. Other companies have based their entire business models around diesel vans.

“It’s difficult for us and we had the advantage of starting with a blank canvass so we didn’t have any legacy of the old way of doing anything, but for the businesses who haven’t had that blank canvass it’s even more difficult,” says Clarke.

“They may be driving around in older diesel vehicles which is a ULEZ challenge now, but to make that leap into electric vehicles is simply not even close, which is going to hamper the wider market for some time I think.”

Gnewt has a back-to-base operation, so all its vans are charged overnight through a custom-installed smart charging system.

However, Sam Clarke feels the charging infrastructure across London is insufficient to support the logistics industry.

“I’m not a huge fan of the scattergun approach of throwing charge points in every direction because I don’t think that is what we need,” he says.

Many vans would be unable to use public charge points as the bays may be too small for them to fit into, while their cables may not be long enough.

“We need more hubs akin to a petrol station where you will be able to charge very rapidly in a short space of time,” Clarke says. “If I know I’ve got three or four hubs where I can charge while having my lunch or whatever, then it doesn’t matter that the vehicle range is somewhat restricted because you can just top up more often.

“There’s no point putting infrastructure in for the now when in five years’ time you might need something else.”

Although it currently operates only in Central London, Gnewt is aiming to expand into a new city at the beginning of next year.

“If all goes well, an ambitious but reasonable target is that we would like to speed that roll-out to hopefully five or six cities over the next few years,” says Clarke.

He was not able to say which city Gnewt would expand into first, but Birmingham, Manchester, Glasgow and Edinburgh “are certainly on the hit list”.

Clarke adds: “If certain cities are going to have a stringent restriction on their urban areas from a transportation view, then we have to look very closely at that because we are perfectly suited for that legislation.”