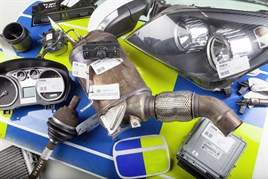 Pre-recession, the idea of fitting used parts to a police vehicle was sacrilege.

Richard Flint, head of transport at North Yorkshire Police, says: “The police and Government used to buy new and buy the best. But it’s not that world anymore.”

With the pressure to cut costs, police fleets have become more open to the concept of second-hand parts.

It is also open to other public sector organisations such as the fire and ambulance services, NHS and the Environment Agency.

Thirty-two of the UK’s 53 police forces are using FAB and its managing director Jason Cross anticipates that by the end of this year all 43 forces in England and Wales will be signed up: “It’s fast becoming an accepted route. We’ve just achieved the £1 million savings mark.”

Cross has developed a scheme that overcomes many of the barriers associated with parts recycling. The biggest problem – the availability of parts – has been largely solved through a “circular system”.

Police vehicles that have been written-off are sold to FAB at a set percentage of the pre-accident value.

That percentage is determined by the write-off category that is applied to the vehicles by independent assessors who use the Association of British Insurers (ABI) code.

FAB strips the vehicle for non-safety related parts, which are sold back to police fleet managers when they need them.

This ensures a healthy supply of parts, and allows it to set itself the target of having an item in stock 80% of the time when requested by a police fleet.

In contrast, when a trade or retail customer contacts FAB, it’s likely to have it in stock around 25% of the time.

Cross points out that there is “no pecking order”.

“If you write-off five vehicles in a year and another force writes off 50 vehicles you will still be given the same access to parts,” he says.

Parts are never recycled from the damage zone; brakes, suspension, airbags and steering components are excluded.

“Everything else that is bolted to the car that can be removed without cutting it can be supplied,” explains Cross.

He adds that the bodyshop quality standard for repairing damaged vehicles, PAS 125, states that recycled parts can be used as long as they are OE  and not safety related.

“You also have to know where the parts came from; you must be able to trace them back to the donor vehicle,” he says.

Further reassurance might arrive in the form of agreed recycled parts standards. A cross working party was set up in 2009 by the British Standards Institute (BSI) which included representatives from ACFO and Thatcham to look at creating a standard for recycled parts.

Although it fizzled out, BSI says that recycled parts are now back on its agenda.

Ian Kitchin, BSI global commercial director, says: “There is an increasing desire to use recycled parts for many reasons including cost, environmental benefits, etc.

“Balanced with this is an understanding that there should be a process to ensure the providence, suitability and confirmation of the continued safety of such parts.

“This is where standards play a part. It is likely that standards will be created, although it is currently at an early stage.”