Tyre labelling: The start of a revolution?

Tyres can have an impact on key areas, such as fuel usage and accident rates, but they are often overlooked by fleet managers.

Those that have maintenance included in their contract hire agreement typically leave it to their provider to choose replacement tyres.

In fact nearly half (43%) of respondents to a Fleet News survey last year said their leasing provider decides which brand of tyre to purchase.

The Salvation Army is a case in point.

Its fleet controller Peter Bonney says: “We have zero say in what tyres go on the car. It comes with whatever the manufacturer has done a deal on and then the leasing company decides what goes on as second fit.

“The drivers get what they’re given basically.”

Any tyres manufactured after July 1 this year have been tested in those areas and from November 1 retailers must provide the labelling information to customers.

Manufacturers or importers may choose to label tyres made before July 1, but it is not compulsory.

The Tyre Industry Federation points out that retrospective labelling of tyres already in the supply chain that were made before July 1 would be costly and carries potential legal risks.

Kerry Watts, manager consumer fleet business at Goodyear Dunlop, says that from a tyre manufacturer’s perspective, tyre labelling is “quite a big deal”.

“Outside fit for purpose, it’s the first time that we’ll have a performance requirement to sell a tyre,” he says.

Some fleet managers also believe tyre labelling will have an impact.

Geoff Wright, head of corporate services at AAH Pharmaceuticals, says: “It will definitely bring tyres into focus a lot more.” 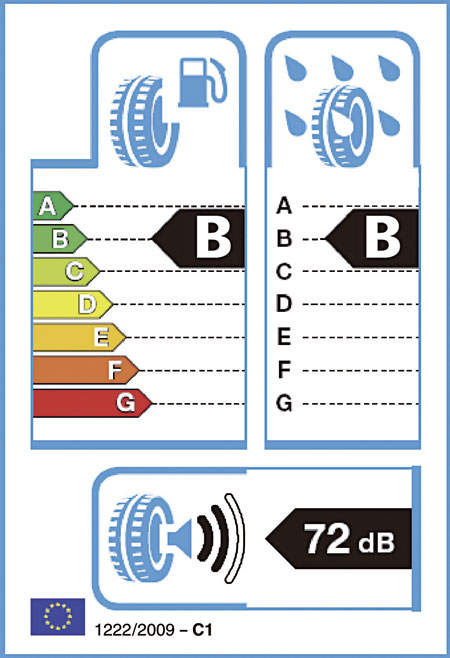 Fuel efficiency and wet grip is rated from A to G (with A the best) while noise is given in decibels.

Steve Dolby, product marketing manager for car, van and 4x4 tyres at Michelin, says the difference in wet braking distance from 50mph for the best and worst rated tyres can be up to 18 metres.

“This is very significant and could easily create more demand for A-rated tyres,” he says.

“The fuel efficiency rating will also be important for fleets, especially those fleets which pay for their driver’s fuel as the difference in fuel consumption between A-rated and G-rated tyres could be as much as 7.5%.”