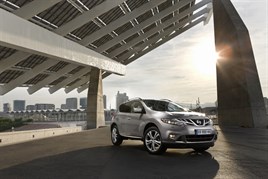 Drivers choosing the new diesel version of the Nissan Murano will be no better off for company car tax from 2011 and will see only a modest benefit for the remainder of this financial year.

The second-generation Murano was launched as a petrol model late in 2008, and sales have been modest, although the new diesel version is expected to be far more popular.

However, the auto-only 2.5 dCi has CO2 emissions of 210g/km and when the 3% diesel BIK surcharge is added, drivers are liable for tax at 34%, just one band lower than the petrol version.

But both petrol and diesel will be priced £2,700 higher than the previous petrol model, which means a 40% taxpayer would hand over £5,058 to HMRC in benefit-in-kind tax for driving the diesel version, compared with £4,759 for the earlier petrol version and only £150 less than the lightly revised petrol model.

The Murano diesel uses the latest version of Nissan's 2.5 dCi engine with a six-speed automatic tranmsission and is more refined than in previous applications in the Pathfinder and Navara pick-up.

It achieves 35.3mpg on the combined cycle and is as well equipped as the petrol version with a single high-specification derivative with only a rear DVD system and metallic paint as options.

Keep up to date with all the latest Nissan car reviews with Fleet News.