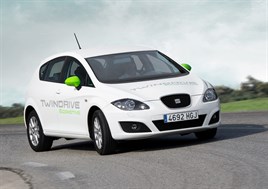 Seat is working on its first electric car designed, developed and manufactured in Spain. The firm is unveiling the prototype Altea XL Electric Ecomotive, a totally electrically-driven zero-emissions car, as well as the prototype Leon TwinDrive Ecomotive, a plug-in hybrid.

Over the next few months the Spanish car maker will make available units of both models to government institutions in Catalonia and Madrid for use in their vehicle fleets. This will provide Seat with valuable information on use of the cars for assessment with a view to mass production of electric vehicles in the medium-term.

Seat envisages the launch of its first electric plug-in hybrid car in 2015, to be followed a year later by an all-electric vehicle.

Seat’s strategy is to commit to a wide range of alternative technologies. To this end the Spanish manufacturer is unveiling two different but complementary models at the same time.

Seat president James Muir said: ‘Customers demand a more sustainable form of mobility, but their needs are diverse. Therefore, we believe that a parallel strategy of developing two different technologies will put SEAT in the best position to meet their needs.’

The announcement of the launch of the first electric vehicles coincides with the start of the biggest new product offensive Seat has known. The company will launch four new models over the next 12 months, the first being SEAT’s smart new urban vehicle – the Mii.