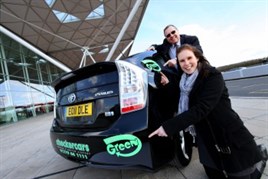 Airport taxi service Checker Cars has taken delivery of the first of an order for 80 Toyota Prius cars. The five full hybrid hatchbacks arrived at the company’s Stansted, Essex office in early March to take their place in an existing fleet of 80 MPVs, and will be followed by 10 more at Stansted over the next two months.

Checker Cars employs 1000 drivers and is the official taxi operator not only at London Stansted but at Gatwick, Bristol, Cardiff and Southampton international airports. The company also services London Heathrow from an off-airport office.

The Toyota's, the first on the Checker Cars fleet, are supplied through Hills Toyota of Woodford Green in Essex. “We will expect to replace the cars every couple of years,” said Checker Cars’ managing director David Crouch. “We’re initially using them at Stansted but we will then involve our other airports.

“Our environmental policy is to reduce emissions wherever possible, and we’re also looking for greater economy in the operation of the fleet, because with fuel prices as they are that’s becoming more and more important. Congestion charge is also a factor.”