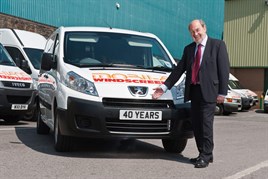 Managers and staff at Bristol-based National Mobile Windscreens are to deliver a classic car windscreen 66 miles by hand in an historic marathon relay to mark their 40th year of next week.

The windscreen will be the symbolic baton for the sponsored five-day walk to raise funds for their chosen charity the Meningitis Research Foundation as part of their milestone anniversary celebrations.

The team will include chairman George Douglas, who founded the company
working from an Austin Minivan in Bristol in 1971, and managing director Phil Lomas.

They will be taking the windscreen from outside the Pilkington EDC headquarters, one of their major glass suppliers at Redditch in Worcestershire on June 20 and fitting it to a Minivan at the Meningitis Research Foundation HQ at Thornbury, near Bristol, on June 24.

The walk has been split into five 13-mile stages including Twyford near Evesham, Bishops Cleeve, Kingsway in Gloucestershire, and Stone village in South Gloucestershire.

Sales and marketing director Martyn Bennett said: “We are celebrating 40 years of success with an historic milestone event which demonstrates our commitment to quality customer service while raising much-needed funds for our favourite charity.”

National Mobile Windscreens, which won the Fleet News award for customer service last year, has so far raised more than £15,000 for the charity.