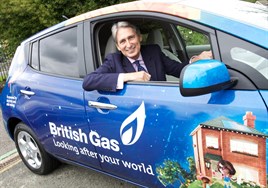 The two Nissan Leaf’s will be used by staff at offices in Staines and Windsor. Both sites have solar-powered charging canopies, which will supply enough renewable electricity to cover the cars’ fuel needs.

The unveiling comes as British Gas announced its aim to have 1,000 electric vans being used by British Gas heating engineers by 2015, starting with 25 next year.

Electric cars are expected to become commonplace on British roads. Experts predict that by 2020, electric vehicles could account for approximately 10 percent of all car sales with roughly 325,000 sold in the UK each year. This will add up to roughly 1.5 million electric cars on Britain’s roads by 2020 – five percent of all cars .

British Gas was also the first supplier to announce the detail of a tariff specifically designed for electric car owners which will see drivers pay as little as 1.25p a mile to fuel their car.
The solar canopies are part of a bigger programme of low carbon projects within British Gas. Last year, British Gas installed solar thermal panels on three of its buildings. This year it plans to complete seven similar projects across five British Gas sites. This is part of the company’s plan to cut its UK carbon footprint by 25% by 2015.

Speaking at the unveiling, Philip Hammond MP, secretary of State for Transport, said: “I commend British Gas for this excellent initiative. It is an outstanding example of private enterprise helping to promote low emission vehicle technology.

“A low carbon future is the only viable future for transport. But we must acknowledge that it is carbon, not the car, which is the problem. The Government is doing its bit by providing grants towards the purchase of low emission vehicles and increasing charging points across the county.

“Working together I am confident that we can make Britain a global leader in the use of electric and other ultra-low emission cars and at the forefront of efforts to decarbonise motoring.”

Phil Bentley, managing director of British Gas, said: “The world of energy is changing and British Gas is at the forefront of this revolution. That’s why we’re leading the way in providing the energy services that motorists with electric cars need including energy tariffs, car charging points, solar panels and smart meters.”

Steve McLennan, marketing director, Nissan Motor GB Ltd, who also attended the unveiling, said: “The Nissan LEAF is pioneering the electric car revolution in the UK for homes and businesses alike. LEAF owners will be ‘filling up’ with cheaper, cleaner fuel with many drivers, like British Gas, taking advantage of clean solar energy to power their car.”