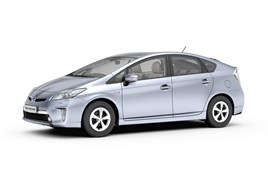 Toyota will debut the production version of the Prius Plug-in Hybrid Electric Vehicle (PHEV) at the Frankfurt Motor Show on 15th September.

The new Prius Plug-in Hybrid features a new, more compact lithium-ion battery which has been developed to meet Toyota’s rigorous standards for reliability. The new battery offers extended EV (electric power only) range, enabling the Prius PHEV to achieve the remarkable fuel efficiency of 128.4mpg and to lower CO2 emissions to 49 g/km, almost half the standard Prius.

While some debate the relative merits of electric cars, the new Prius Plug-in Hybrid offers drivers the best of both worlds; extended EV driving range for shorter journeys in towns and cities, while the efficient hybrid petrol engine gives the car uncompromised long range capability and the very low fuel consumption of the standard Prius.

The Prius Plug-in Hybrid represents the latest development of Toyota’s Hybrid Synergy Drive (HSD) system. This trusted and reliable full hybrid technology has a track record earned through worldwide sales of over two million cars and billions of miles of driving.

The new Prius Plug-in becomes the flagship of the Prius range, a showcase for new technologies and further advances in hybrid technology. In 2012 it will join an expanded Toyota hybrid range consisting of the Prius, the British-built Auris hybrid, the new, seven-seat Prius+ and the new Yaris hybrid, demonstrating Toyota’s commitment to introduce Hybrid Synergy Drive technology to the wider market.