Vauxhall to unveil an experimental car in Frankfurt 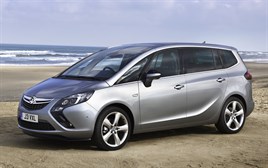 Vauxhall is set to unveil an experimental vehicle alongside the Astra GTC and Zafira Tourer at next month’s Frankfurt Show.

Little is known about the vehicle but Vauxhall promises it will explore a new interpretation of driving fun and surprise with its level of innovation, while emphasising the company’s passion for driver-focused vehicles.

This passion is also evident in the Zafira Tourer which is expected early next year. A new range of engines and a redesign of the clever Flex7 seating system seen in the original Zafira means it’ll target families who want a people carrier with a sporting touch, i.e. those who usually buy an S-Max.

The Astra GTC is due in UK showrooms in November and will stand out thanks to its rakish looks. Its high-performance front suspension twinned with a range of petrol and diesel engines promises improved performance.

Vauxhall will also be showing its electric vehicle, the Ampera, which will be available from April next year. Vauxhall claims the Ampera is unique because it combats the range anxiety that puts most people off buying electric cars in case it runs out of charge and leaves them stranded.

It can drive 25-50 miles using its batteries before an on board petrol-powered generator kicks in and provides electricity for a further 310 miles.

Read our first drive of the Vauxhall Ampera here.