Fleets give thumbs up to Mini E trial 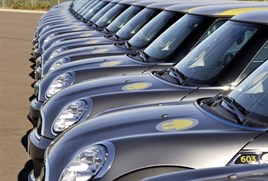 Understanding how electric cars are driven in the real world has taken an important step forward with the release of data from the Mini E field trial in the UK.

With 62 members of the public and 76 pool users running the battery-powered hatchbacks over two six-month periods, the government-supported trial is the most in-depth of its kind in the UK to publish its findings.

The early findings have already informed the development of the 2011 BMW ActiveE car, a four-seat car based on the BMW 1 Series coupe, but the biggest beneficiary will be the BMW i3, the first purpose-built EV from the BMW Group, set for launch in 2013.

Fleet use was a big part of the trial with organisations in the UK and in Europe reporting positive feedback from both individual drivers and also fleet managers monitoring the Mini E's use as a pool car. Those users who swapped out of their regular car reported that the Mini E was fine for 70% of journeys made during the working day, while the pool car success rate was even better with between 80-90% of regular trips achievable.

The speed of charging was an important consideration for fleet users, while managers also flagged up the need for a clear procedure for the efficient charging of pool vehicles. Companies that participated included Scottish and Southern Energy, Oxfordshire County Council, and Oxford City Council.

The UK trial also discovered that everyday use of the electric Minis didn't radically differ from the typical driving patterns of a control group of drivers of conventionally powered cars in the same segment.

In fact, the daily journey distance of 29.7 miles was slightly more than the 26.5 miles recorded by the control cars, a mix of Mini Coopers and BMW 116i models. Interestingly, the UK average daily distance driven for private cars overall is less than 25 miles. With information gathered by on-board data-loggers, the average single trip distance was recorded as 9.5 miles compared to the UK average of seven miles.

In addition, 84% said that the severe low temperatures during both phases of the field trial affected the distance that could be driven between charges, but despite that, four out of five participants told the researchers they thought the Mini E was suitable for winter use, with one user, Janet Borgers, saying she "regularly did 88 miles in a single journey in the cold weather". Another female commuter clocked up almost 8,000 miles over a September to March period.

Given the daily driven distance of just under 30 miles, the drivers felt confident enough not to have to charge their Mini E every night. In fact, the average was 2.9 times a week according to information fed back via electricity smart meters, with special night-time tariffs successfully encouraging individual drivers to charge when it was cheapest, which coincided with a low demand period and a greater proportion of renewable energy in the grid mix.

Nine out of 10 drivers told the researchers that charging actually suited their daily routine, with 81% agreeing with the statement "I prefer to plug in the car than go to a fuel station". The running cost-savings were appreciated by users, with one participant telling researchers the thing she'd miss most was "the money I will have to start paying for fuel again".