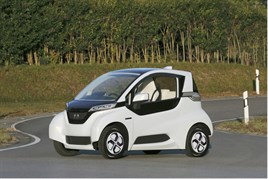 The vehicle was developed in light of the vehicle categories for micro-sized mobility products that are currently being discussed under the initiative of the Ministry of Land, Infrastructure, Transport and Tourism in Japan, as well as for the regulations for the L7-category in Europe.

Using vehicles based on this prototype model, Honda will begin demonstration testing in Japan in 2013.

The demonstration testing will verify the potential of the vehicle in various uses including supporting everyday short-distance transportation for families with small children and for senior citizens, home delivery services, commuting and car sharing.

The Micro Commuter Concept that was first introduced at the Tokyo Motor Show in 2011. This prototype model advances the concept in terms of cabin space. By changing the rear seat, it is possible to seat one driver and one adult passenger in the micro-sized body.

The adoption of the variable design platform positions components such as the battery, motor and control unit under the floor and in the rear space to concentrate the vehicle driving functions into a compact space.

This made it comparatively easier to develop and produce a body and interior that accommodates various uses and customers’ needs than existing vehicles.

Other features of this model include the use of a user-owned tablet device for the application of functions such as meter display, navigation, audio and back-up camera display, and the ability to charge the battery of the tablet using solar cells mounted on the vehicle roof.

Honda is continuing research of onboard solar cells to provide solar energy to assist the driving.

Through collaboration with the Honda Smart Home System (HSHS) that has already begun demonstration testing in the city of Saitama in Japan, Honda is planning to verify the CO2 reduction effect from the optimised energy management in everyday life and the values this vehicle can provide for customers when it is used not only as an electric vehicle but also as a household battery.