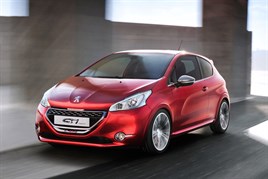 Peugeot is revealing two concept cars in Geneva, which present two expressions of the Marque's upmarket trend in the supermini segment.

GTi Concept: The re-generation of the 208 (pictured)

Instantly characterised by being the 208, it features chequered-flag motifs that embellish the metal mesh of the grille, and the lower bar affirms its origin by displaying the French ‘Le Tricolour’ flag or the Union Jack when in the UK.

Other distinctive exterior features include: double chromed exhaust tailpipes, aero lower bodywork spoilers and lower sill skirt extensions that all capture the signature badging. Placed within the grille is the brushed aluminium GTi Concept logo that can also be found on the rear quarter panels, as a salute to its illustrious predecessor - the legendary 205 GTi.

On the inside, the passenger compartment is a true GTi environment, with a characteristic sports leather stitched steering wheel, the treatment of which is replicated on the sides of the gear lever, double stitching in the seats and enhanced with LED backlighting to the surrounds of the high-tech instruments. The sports seats are trimmed with Nappa leather on the outer section, and cloth in the centre with an embossed tartan motif, and a leather head restraint.

The GTi Concept takes its propulsion from the RCZ THP 200 engine. Combined with a 6-speed manual gearbox and a 1.6-litre THP engine.

The GTi Concept benefits from the improvements that characterise the 208, taking full advantage of its compactness and lightness. To enhance the dynamic experience, it has a 36mm wider track, at the front and at the rear, and a rear roof spoiler to generate down force at speed. For optimum braking performance, the GTi Concept is equipped with four discs; 302mm diameter at the front and 249mm at the rear, set off by red-painted brake callipers.

Powered by a 1.6-litre e-HDi engine, developing 115bhp and equipped with a 6-speed manual gearbox the XY Concept transports its occupants in a refined environment, with a Crimson colour treatment applied to exterior bodywork and the decorated interior.

Special ‘Pulsion’ paintwork means the XY Concept appears to constantly change, depending on the distance and the position from which it is viewed. This ability to transform is the result of precise application of sixteen coats of paint and lacquer.